For Elana James, there's life after Hot Club of Cowtown

"It's been a lot of hard work over the last year and a half, clawing back out to the place where we'd been before, and there's been an enormous amount of work with that." Thus speaks Elana James, better known as Elana Fremerman, the fiddle-playing co-founder of the hot jazz aggregation Hot Club of Cowtown, which abruptly disbanded in 2005. Since then, she has toured behind Bob Dylan and Willie Nelson, created a solo debut album for her own Snarf Records label and re-christened herself Elana James. 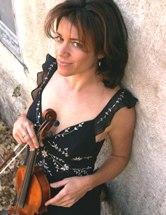 Speaking from her parent's home, James tells the story behind her previous band's break-up. "We reached a really great point and were kind of on a roll where we were going on some really neat tours and doing all sort of things," she says. "At that point in 2005, Whit (Smith) - the Hot Club guitar player - decided that he just didn't want to continue with the band's format. I think he just sort of had enough of it, and that was very disappointing to me because I loved that band, and I love that kind of music, and I loved playing with Whit. So, it was really a major, major bummer."

Smith and Fremerman - as she was then billed - met while playing for Western Caravan, a touring cowboy swing outfit during the early to mid-'90s. Striking out on their own, they enlisted a bass player and played for tips until they achieved a foothold in clubs. Their recordings for HighTone helped them garner steady bookings worldwide, earned them a guest spot on Garrison Keillor's "Prairie Home Companion" and led to tours opening for Nelson and Dylan.

Learning as she worked, James also began spelling Smith at the mic by adding her own cool and jazzy vocals to the mix. As their reputation grew, Hot Club felt pressured to write new material for the genre, which they did quite ably. "We didn't know anything about music as an industry or anything like that," recalls James. "Of course, as time goes by, you realize that there's a very strong bias for artists who write their own songs - or who do contemporary songs - whether they wrote them or someone who's around now wrote them. But they have to be new songs."

For an independent label act, Hot Club had carved out a reliable commercial niche that served both Bob Wills fans and Django Reinhardt buffs. Further, the music was fresh and atmospheric and gently stretched the genre's boundaries with their new material. Yet, a conflict of temperament always existed between the two founding members.

"A lot of the problems that Whit and I had in the past all came down to the fact that I tended to be more business and detail-oriented, and Whit likes to drink a lot of coffee and just play guitar and not be bothered," she says. "There's a place for everything, but we had a lot of friction about the fact that a lot of the business stuff had come down to me, and I didn't like that because the band was a joint venture."

The break-up of Hot Club caused James to briefly entertain the idea of quitting music altogether, which shocked her friends. "I used to think that maybe I should go to law school, and people would say, 'No, no you're, like, living your dream for all of us!' And I'm thinking, 'Boy, do you realize that living the dream means checking into Red Roof Inns at 3:30 in the morning and having them tell you they can't find your reservation?"

Yet James admits, "Frankly, I think even if I had tried to stop, I probably wouldn't have been able to."

Once she decided to continue in music, the artist changed her surname to James - derived from her middle name Jamie. Part of the reason for the change is that she felt "Fremerman" was hard for people to say or remember. However, the concept of a clean break from the Hot Club era was definitely on her mind. "That's when I thought, 'If that's over, and I'm going to start over, I can call myself whatever I want.'"

Subsequently, Smith took Hot Club bassist Jake Erwin and formed his own variation of Hot Club: Whit Smith's Hot Jazz Caravan, who had several songs on 2005's "Four Dead Batteries" soundtrack. Yet, as James explains, neither her new band nor Smith's completely ended her association with either her former guitarist or Hot Club of Cowtown.

"Fortunately, I got hired by Bob Dylan to play with him and his band for a while. So, while Whit was playing with his band, I played with Bob Dylan. The following the summer, I decided to start my own thing and began my own trio, Elana James and the Continental Two. In the interim, Whit and I continued to play together, and then Bob Dylan hired my new band to play a tour with him this past summer. I love playing with Whit, he's a totally fantastic musician, so I hired him to join my trio, and we toured as the Continental Two Plus One."