In a field consisting of Cherryholmes, Nothin' Fancy, Alecia Nugent and Pine Mountain Railroad, King Wilkie walked away as the IBMA's Emerging Artist of the Year in 2004 thanks to its debut "Broke." For many groups, this is the spot where they can see the Entertainer of the Year award dangling just ahead.

For King Wilkie, which just released "Low Country Suite," their debut for Rounder, it was both a crowning achievement and their bluegrass swan song of sorts. 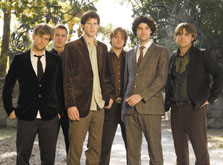 "Since that time, we decided to slow down, get some day jobs. We wanted to be able to concentrate on our sound a little bit more," explains King Wilkie mandolin player and vocalist Reid Burgess. "Not that we didn't have a developed sound in 2004, but it to us it felt a little bit like we were aping other people."

"You can go and play Stanley Brothers songs because it's cool, and it feels good, but it's kind of like musical tourism in a way. It's fine, but when you're doing it for a living you kind of start feeling like you want to do something more remarkable as your own thing, even if it's still influenced by that other stuff. It's like regurgitation. We're not the next Stanley Brothers. We're not the next Bill Monroe, and we knew we never were."

Burgess grew up listening to a wide range of music, but it was bluegrass that took root.

"I liked a lot of early rock and roll. I liked Buddy Holly. I kind of swayed back and forth between rock and current rock, the normal rock stuff when I was in high school. I played classical piano, so I was like a classical enthusiast for a long time, but I was pretty all over the place."

"I went to the first (bluegrass) festival by accident," he says.

"That was like the total eye-opening experience. I don't think the other people I was there with had the same life-altering experience that I did, but it really spoke to me. It was bluegrass and that kind of old-timey music for many years after that for me.

"When I got into bluegrass, part of that was it was an alternative to any other alternative. It was completely different; it comes from a completely different place. I gravitated towards that almost like some young people gravitate towards other stuff just for the sake of it being different, like punk rock or something. I also think it was because I was looking for something that was less processed, more real."

That search for something real continued even after being recognized by peers as one of the best in the genre. As the band, which formed in Charlottesville, Va. in 2003 (band members actually met at Kenyon College in Ohio), began to prepare for their next project, their other musical influences began to creep in.

"I think it came out of songwriting more than anything else; I think it was pretty natural. There were a couple of songs that paved the way, where we started to get excited again about where things could go," Burgess says. "There were more transition songs and those could be heard on an EP we made, 'Tierra Del Fuego,' but a lot of what we do is still the same."

"It's the same kind of reason that we got into bluegrass - it shares a lot of the same themes. We kind of like the darker songs for some reason. The main thing is to capture a certain spirit, and that spirit is in bluegrass. There is a sublime-ness, a nostalgia, there's a striving. I guess we want people to hear us and for it to be real. People to hear us and get a sense of deep feeling, whatever that means."

One of those songs that signaled a stylistic shift was "Wrecking Ball," which appeared first on the EP and now, in a re-recorded version, on "Low Country Suite."

While he shares writing duties with guitarist Ted Pitney, Burgess wrote or co-wrote 8 of the 11 songs on "Low Country Suite." During their hiatus, Burgess concentrated on his songwriting as a discipline and often brought parts of songs to his band mates.

"Very rarely does something just happen, you kind of have to treat it as a task that you work at every day. That's how I am anyway. I enjoy writing songs and stuff will happen, but in order to get songs from the beginning, from a skeleton to having it good enough for my standards, you have to tinker a lot," he says.

"I have some of those little digital recording units, and I just lay some basic ideas out on them and then play them for the band, and we play through them together, and it grows from there."

The influences of the band, which consists of Burgess, Pitney, bassist Jake Hopping, vocalist/guitarist John McDonald, banjoist Abe Spear and multi-instrumentalist Nick Reeb range from the early pioneers of rock and roll to Gram Parsons and the Rolling Stones.

"Everyone comes from a pretty eclectic musical background that is in this band," he says. "We're just trying to do something that you can't get from listening to something else. I don't know where it comes from, I mean, it obviously comes from a lot of places, but by the time it gets filtered through everyone and everyone puts their little color on it. Then it sounds like...I don't know what to draw a comparison to, directly."