Kelly Willis didn't exactly go on the fast track in releasing the follow-up to 2002's "Easy." The Texan could not plead guilty to being gun shy especially since "Easy" received very positive reviews.

But fans of the singer had to wait until late June for "Translated From Love," a dozen-song package produced by rootsy guitarist Chuck Prophet. 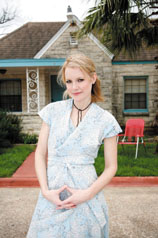 "Translated From Love" is quite a different breed of music from "Easy." That is apparent from the get go with electric guitars in evidence, a big departure from the acoustic bent of the more traditional country sounding "Easy." Willis still is country, but she offers several twists and turns.

So, what gives with Willis succumbing to Lucinda Williamsitis - being slow in the output department?

"Part of it is I'm slow at making records. That's sort of my nature," says Willis, laughing, in a telephone interview from Austin just home from shows in Atlanta, Birmingham, Ala. and Houston in support of "Translated." "But the other part is I kept having kids. I'd get ready to do something and then bam, I'd have another kid. I have four kids under six, and that obviously takes up takes a lot of my time."

Willis married singer/songwriter Bruce Robison in 1996. Deral Otis was born in January 2001. Willis gave birth to twins Abigail Esme and Benjamin James in 2002. On January 2006, the fourth of the brood, Joseph Willis Robison, was born.

So, without the kids, would Willis have been faster in getting her music out?

"I really do think I would have - the twins were two years old when I found out I was pregnant with the baby. I was really excited and gearing up to go back to working, making records and just working in a different way than I normally do. When I'm not making records, I'm just gigging maybe two weekends per month."

"It really kind of stopped all those plans. I realized I wouldn't be able to do that and have a baby. I knew that it was going to require a lot of my time, so I had to put it off."

Willis is quite happy with motherhood. "I was 31 before I had the first kid. I really always felt that I got to really have a full career before I started focusing on motherhood. So, it never stopped me from making the kids my big focus."

As for the slow process in making music, Willis says, "I always feel like I need some inspiration. I need to have a reason for making a record. I need to think the record is going to be really good. I don't want to just turn something out because it's time. So, it takes me awhile because I'm not real prolific. It doesn't happen for me like it does for my husband, who's prolific and constantly waiting to make records, and that's not just want the way I am."

Why put out music now?

"I started to just feel like I was never going to make a record to tell you the truth. I had this feeling that that inspiration was never going to happen because there were too many distractions. I just don't have the time to noodle around with my guitar. If I ever get a couple of minutes, I'm not off doing that. I'm desperate to get some sleep - the mundane things you have to do when you're taking care of a family of four. (Like) go to the grocery store."

Willis says she realized she needed to kick start the process to make a new record.

"I really started to think it wasn't going to happen if I didn't kind of force it. I needed to get someone to produce it that I really trusted, really loved their creative instincts and someone I was familiar with and comfortable with because I'm kind of a control freak. I didn't want to get in there and not trust the person, which is easy to get into."

"I thought if want to write songs, I need to get someone who's going to force me to do it. That was the only way it was going to happen. I called up Chuck and see if he was interested in doing that with me."

Chuck was Chuck Prophet, a member of the now defunct band Green on Read, who played guitar on Willis' previous two releases. She contacted him in the summer of 2006 with recording done that fall in Bruce Robison's studio.

At one point, Willis thought of doing a covers record.

"I told (Prophet) I wanted it to be a fun, energetic record. I think that he was really eager to take on that challenge."

Willis says that Prophet seemed to relate well to her music and style. "I just really loved the attention he gave to my music. I always loved...the instinct he brought to my songs. He'd always have some really great ideas that would make the song even better than it was."

"I just really was impressed with that about him and that he'd take it so seriously. All the players were like that, but I don't know what it was about him. He would often do something on a song that was just exactly what I was hoping for or thinking. I didn't have the talent or ability to express it or put my finger on it. 'Yeah that's it, that's it.'"