Teddy Thompson gets upfront and goes down low

Teddy Thompson is speaking from a phone booth in the middle of noisy London. And as he talks, he does so with a strong British accent. But that should come as no surprise; he is the son of legendary British folk singers Richard and Linda Thompson, after all.

Quite naturally, songs like "Everybody Move It" from his previous "Separate Ways" release roll to gentle folk rhythms and show that he is, indeed, his parents' son. Yet the singing voice on his new Verve Forecast release, "Up Front and Down Low," doesn't sound British or folk at all. 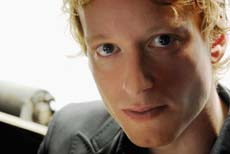 Instead, it is nearly a dead ringer for modern country crooner Raul Malo, as it finds him performing a set of mostly traditional country songs

"Well, I actually grew up listening to country music because of my parents." Thompson explains. "They played a lot of country music in the car - Hank Williams and The Everly Brothers - when we were traveling around. Like a lot of musicians, they didn't really listen to the music similar to the kind of music they were making. That was sort of their day job. So they listened to a lot of American music."

Some of the old country songs Thompson, who lives in New York City, covers are quite familiar, such as Ernest Tubb's "Walking The Floor Over You." But a few – like "My Heart Echoes"- are relatively obscure - even to diehard country music fans.

But whether easily recognizable or not, most of Thompson's smart choices showcase classic country's clever wordplay. This trait is exemplified by the titles "I'm Left, You're Right, She's Gone" and "You Finally Said Something Good (When You Said Goodbye)." This disc contains more than just witty titles. For instance, you've gotta love a line like: "The only thing I can count on is my fingers," from "(From Now On All My Friends Are Gonna Be) Strangers." Furthermore, not everything is ancient, as Thompson performs Dolly Parton's relatively recent "My Blue Tears" and includes one original, "Down Low."

"I had a few of the songs that I knew I wanted to do," Thompson recalls. "After that, I just kind of started hunting through...it was a project...I started hunting through box sets and CDs and old records looking for songs. So, I listened to a lot of stuff. There were some songs that I wanted to do, then decided against it. I always wanted to do 'A Picture of Me Without You,' but after I listened to the George Jones record, I realized it's uncoverable. Because the record's too great."

Nevertheless, Thompson did have a go at one Jones-associated song, "She Thinks I Still Care." And to avoid drawing comparisons to his musical heroes, he avoided trying to sing like a traditional country singer.

"I didn't feel too daunted because I felt like I wasn't going to sing them in a classical country way," he explains. "So, I wasn't worried about having to live up to the originals or sound country or anything like that."

"It's a common situation that a lot of artists find themselves in," says Thompson. "You get home. You'd finished a record, and it's done well. And you feel happy. And you've toured. And you come home, and you realize that a year has passed – and even longer since the record was released – and you start to think, 'Oh god, I've got to make another one again.' That's the way the machine works. You start to think, 'Oh shit, I haven't really written any songs, but I don't really want to sit home and try and write songs for six months.' And you start thinking all these things and then Brad Albetta (bassist, producer) says, 'Why don't you just make a George Jones record or something or do some George Jones songs?' But we were never really going to do just at George Jones record. But it sort of planted the seed."

This "Up Front and Down Low" new growth didn't begin as an official next release. It just sort of grew into one, instead. Thompson's record company dug it at first, then didn't dig it so much. So, he was happy when they told him they loved it, initially, and when they began to sour on the idea, this adverse reaction just made him all the more headstrong over completing the project

"We started recording some of these songs just independently, just for fun," he recounts. "I didn't tell the record company, and we just did it. And we did a week's worth of work, and I thought it was really great. And then I played it for the record company and said, 'This is what I've done.' And at first, they loved it. To be fair, the people at my label – who are actually no longer there; that's the way these things go – the guys who were in charge at the time loved it because they were big music fans and said, 'Ah this is great. We should do this.'"

"And then a couple weeks later, they call up and say, 'Wait a minute. We've thought about this...' I suppose they thought about it in terms of 'How are we going to sell this?' And then they decided it was a bad idea. In a way, as soon as they told me they didn't really want me to do it that sort of spurred me on. It was then, like, 'Fuck you. I'm definitely going to do it.' It just made me want to do it even more with that perverse nature that I've got. 'If the record executive thinks it's a bad idea, then it must be a good idea.' Basically, there was a lot of fighting. I had push really hard. I had to try really hard. There was a big break where there was a lot of turmoil where they said, 'Oh, we don't know about this.' But I just kept on them; I just fought really hard to get it done."