Mel Tillis was just inducted into the Country Music Association Hall of Fame. But if you think this man just sits around polishing his many awards, you're wrong. Talking while driving from Florida to Branson to perform., Tillis apologized for doing so while driving, but multitasking is nothing new for this multitalented man. 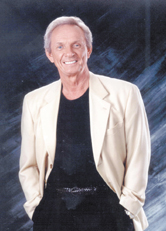 Tillis is also a patient man. "It took me 52 years to make it, but I'm mighty proud, and it's good to be honored by your peers," says Tillis of his Hall of Fame induction. "I'm in good company; I went in with Ralph Emery and Vince Gill. And they had quite a ceremony where they presented us with our medallions."

In addition to this recent CMA election, Tillis is in the Nashville Songwriters Interna-tional Hall of Fame. The CMA also bestowed upon him the Entertainer of the Year award in 1976, and The Grand Ole Opry inducted Tillis as a member in 2007.

Tillis could have just as easily been inducted as a songwriter or as a comedian because of his natural sense of humor. Even so, Tillis wants to be remembered most for his showmanship. "I love to entertain," he explains. "The other stuff is there, it will always be there - the songs and all."

"I'm working on a novel," Tillis explains. "It's fiction. I should have it finished around the first of the year, then I'll look for a publisher." And does this book have anything to do with the music business? "No, it's just a bunch of lies," Tillis quips. "I read where Mark Twain used to get up at about 4 o'clock in the morning and make some coffee. 'I light a cigar,' Tillis quotes Twain saying, 'and I start lying.' I thought, hell, I can do that!"

And let's not forget Tillis's acting experience. He appeared in "Every Which Way But Loose" with Clint Eastwood, and "W.W. & the Dixie Dancekings," "Cannonball Run" and "Smokey and the Bandit II" with Burt Reynolds.

It looks like he hasn't quite rid himself of the acting bug yet.

"I'm going to San Antonio sometime in December," he relates, "Roy Clark and I are going to do a cameo appearance in a movie. And I don't know the title of the movie. But it's a western, and it opens up in a saloon with me, and Roy Clark, and we're talking. And we kind of set up the movie as we reminisce about this and about that, and then it opens with the movie. And you can still hear us talking in the background. And then I've got another one coming up the first of the year with Toby Keith. He's going to do a movie, and he wants me to be the plumber. And I can be the plumber."

During his over half-century of performing, Tillis has rubbed shoulders with many of the best. He was a regular on Porter Wagoner's old TV show, but sadly his friend just recently passed away.

"I learned a lot from Porter," Tillis says. "I watched him work an audience, and boy he could really get 'em in the palm of his hand, and he treated 'em right. And I kind of do it the same as he did it over the years. He helped me a lot. He put me on his show when I was kind of getting started, and I appreciated it. And he introduced me to a whole new audience, a syndicated audience, and then later on I went with Porter to The Glen Campbell Goodtime Hour. Old Porter, he started it all for me as far as entertaining is concerned."

Unfortunately, Tillis never got the chance to say a proper last goodbye to his pal.

"I was in Branson; I was doing a family show with my family: my son, Mel Jr. and Pam, and another one of my daughters, Carrie April," he says. "And I didn't get over there. He was supposed to present the Hall of Fame medallion, but he couldn't make it so Little Jimmy Dickens was the presenter. And he died at about the same time Little Jimmy Dickens hung it around my neck. That really got to me."

In addition to the Wagoner and Campbell shows, Tillis also had his own short-lived variety show in the '70s. And his lovely co-host was Susan Anton, no less. It was called Mel and Susan Together.

"That was a wonderful experience," he recalls. "But they preempted it every time it came on. Billy Graham preempted it, and they never showed it again. I think we did four episodes of it. It was produced by the Osmond Brothers. We did it Utah, in Orem."

Ah, but they just don't make variety shows like Tillis's program anymore, and that really irks him.

"They say it's too expensive, with the musicians and all that stuff," he explains. "(That's) a bunch of crap. By gosh, it's just doesn't make any sense. They put all this damn crap on today that ain't worth a shit, if you want my opinion. It's so different. People who are on there are half damn naked."

Many may not realize that Tillis made his first mark in the music business as a songwriter and a darn good one at that. When asked, he has no trouble quickly rattling off a few of his proudest songwriting moments.