Sarah Johns may not be today's typical female country artist. For starters, she does not have a hit on radio (yet), but she feels that everyone knows who she is in radio land. (That's a good thing).

Second, instead of veering towards the pop side of the country spectrum, a la today's stars like Carrie Underwood, the Kentucky native remains true to her country roots. 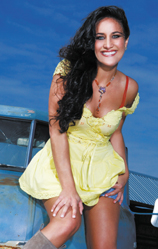 And in this day when music is so song driven, Johns is taking the credit/blame for what the listener hears because she had a hand in writing all 11 songs on her debut, "Big Love in a Small Town" (BNA).

Johns, 26, who was discovered in a bar by Toby Keith's manager, isn't in a looking back mode of coulda, shoulda, woulda on the album.

"The label was really wonderful in letting me have my artistic ability with it...I feel there's such a huge audience out there for country music, pretty traditional country music, and so that's why I did it."

Johns says label head Joe Galante "loves when you have passion about something, when you really feel strongly about something. I tried to write very country, but make it today too, so that radio will love it, and the young people would love it and the old people."

Even though she helped write all the songs, Johns did go the traditional route of looking for songs written by others as well.

"I worked my tail off. I went to publishing companies and listened for other songs. I said 'hey I want the best stuff I could find'. Joe Galante and my A&R people said, 'your stuff just sounds like you'. They wanted to set me apart too at the same time. They honestly have been so trusting in everything with me, even asking 'what do you think the next single should be?' It really has been wonderful, and if it wasn't, I would tell you because I don't lie."

Johns's brand of country music is done with a definite nod to Dolly Parton, Tammy Wynette and Loretta Lynn.

Johns makes no bones about where she's coming from.

"The reason I wanted to (go traditional) is because I think it's country music to me. That Rascal Flatts's new song ("Take Me There") is so pop - I love the song, I love a lot of Carrie Underwood stuff. Let's be honest. It's not traditional country. It's not country really. It's pop. That's fine, if they can do that, but I'm from the holler in Kentucky."

"I want people to hear my music and know who I am, and that was part of the reason for writing the whole record. You're going to go 'she's a sassy spitfire, and I've like to sit down and have a beer with her.' It seems very approachable, and I wanted people to be able to see me as that."

"My favorite stuff and honestly what I even listen to right is XM, Willie's Place...It's so funny because I'm young, but the stuff that really turns me on, that really wants me to drink a beer or kick a hay bale over is the traditional country music. I love it. I always have. George Jones and all those types of people."

"You do have to progress. Even Sarah Evans who started off so strictly country. (Her first CD, "Three Chords and the Truth" was extremely traditional, but when that didn't sell very well, she went for a more modern sound). I think there's a way to progress, but still keep those country roots on your albums, and she's done good at that. Lee Ann Womack has done good at that."

Johns also acknowledges the realities of the music business. "You got to sell, or you'll lose the record deal."

"I know that there is an audience out there that wants country music. Just look at Josh Turner."

Johns's first single, "The One in the Middle," was not a huge hit at all, though it did chart. But Johns also is convinced that it left a big impression on listeners and the all important radio programmers.

The song is about an ex-boyfriend who dumps her for someone else even ' though "I would've given you the finger on my left hand/the one that you use for a wedding band but" and then the chorus kicks in, "Now I'm giving you the one in the middle/The one that's a little longer/And I've got another one on my other hand/So I can say it even stronger."

Not exactly the lyrics for a kiss off song you'd expect to hear on country radio.

Johns wrote the song with Jason Sellers and Lynn Hutton. "It took us three days to write the song. We were real slow writers."

"They were, 'would you be okay with singing something like that?' I said, 'yeah, if you think it's a hit idea'. We wanted to make sure we had that thing perfect...I've been cheated on. I had a boyfriend who cheated on me after six years. Everyone's been there and everyone's felt like that, so what better thing to say than whatever, here's your middle finger."