Allison Moorer is less famous than her sister, Shelby Lynne or her husband, Steve Earle. But one might make a case that she can out-sing either of them. Each aforementioned artist is a singing stylist, whereas Moorer has a naturally beautiful and pure vocal instrument.

And that strong voice of hers is especially showcased throughout "Mockingbird," Moorer's just released covers CD. 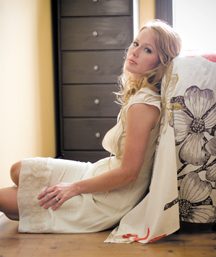 Moorer put out her first album, "Alabama Song," in 1998, and probably received the most media attention with "A Soft Place to Fall," a song she contributed to "The Horse Whisperer" soundtrack. (She also appeared in the movie). She also got noticed for later recording the CD version of "Picture" with Kid Rock, though the radio version with Sheryl Crow received the airplay.

Moorer's latest album - her seventh of original material to date and first release for New Line - is by no means intended to be a feminist manifesto. It is, however, quite feminine in the respect that every song was written or co-written by a woman.

"It was a way to do a cover album, but narrow it down," Moorer explains. "It was just too broad otherwise. It was an opportunity to shine a light on female writers."

There are 12 songs, but with the Alabama native's varying tastes, she initially began with a big selection to choose from.

"I think at one point I had a list of 40 some odd songs because once I got into doing research, one thing led to another, and that led to another and another," she says. "When I first started, I thought it would be easier than it ended up being. But looking under the rocks, you start to connect dots. At one point, I had a list. It wasn't necessarily songs, but it had about 40 artists on it that could just not be ignored."

"So I thought, 'Oh gosh, I've done a really bad thing here. How am I gonna get through this?' It was about people who have been important in influencing me and also being influential generally. But then I decided, 'Well, I can't present this as an educational tool.' It has to be relevant to me, and it has to be musically interesting, and it has to be about songs that I can perform well and put my own stamp on...and then ultimately get 12 songs that hold together and make a good record. It was a long process, but it really took me sitting down with a guitar and figuring out what I could bring to it."

All of these songs are special to Moorer, but a few stand out because they mysteriously take her back to specific points in her life.

"'I'm Looking for Blue Eyes' really does that for me because my father taught it to me," Moorer explains. "It was the first song I ever learned how to sing by myself, and I've known it practically my whole life. And I've been singing it for my whole life."

"So, when I decided to do this record, I knew that song had to be on there. It just had to. It's funny because I toyed with some other Jessi (Colter) songs because I think she's just amazing, and she's really been an influence on me as a singer and as a writer. And I am not sure why I was toying with doing any other songs, but it just came back to 'I'm Looking for Blue Eyes,' and I just felt like I wanted to start the record with 'Mockingbird' because I wrote that, and then end with 'I'm Looking For Blue Eyes' because it's sort of the full circle backwards."

Moorer was no doubt inspired by many great ladies, such as Joni Mitchell ("Both Sides Now") and June Carter Cash ("Ring of Fire"), during her formative years as a performer.

"I never really thought about writing songs when I was a kid," she admits. "I knew that songs came from somewhere, but it seemed a little bit like magic to me. It still does in some ways. I guess I was probably in my late teens before I really considered writing a song."

"I can't remember a time in my life when I didn't know of Patti Smith," says Moorer, 35. "But I had never really investigated her music until recently. Living in New York, she has a real presence there. She's been so influential. Without Patti Smith, there's no PJ Harvey. There's no a lot of people."

Perhaps the most striking cut on this top-to-bottom fine release is Moorer's take on "Ring of Fire." With its slowed down tempo and complete lack of mariachi horns - the sort heard prominently on the original - it's almost a completely different song. "I think if you're going to tackle something that's as well known as 'Ring of Fire,' you're gonna have to find a way to put your own stamp on it," Moorer explains.

"I arrived at that version as a sort of happy accident. I was just sort of playing around with it one morning and built this drum loop in my laptop. I combined two or three loops, and I came up with something I liked. So, I just started adding instruments to it from there. I didn't think it would end up on the record, but the loop I built that morning actually ended up being the drum track on the record.'