Tift Merritt appeared on a roll after releasing "Bramble Rose" in 2002 and "Tambourine" in the summer of 2004. The North Carolina singer was among the leading lights of the so-called alt.-country crowd and attracting glowing reviews, even a Grammy nomination for best country album. But she would not have landed a role with "Where's Waldo?" because unlike the cartoon character, Merritt seemed pretty much nowhere to be found for awhile. 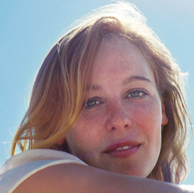 That is until she released her new collection of songs, "Another Country," in late February. And instead of being on the Lost Highway label where she got her start, Merritt switched over to Fantasy/Concord, the home of John Fogerty. "It's feels like a long time. It definitely feels like this record was a long time in the making and in the coming," says Merritt in a phone interview from New York City where she recently moved. The 11-song disc combines country, bluesy sounds and the voice of a French chanteuse. "I just don't want you to think I was home being lazy."

The title of the CD in this case says quite a lot. "Another Country" is not only a song on the album, but describes where Merritt has spent a chunk of her time in recent years. That other country was France, and spending time there clearly informed "Another Country."

"(With) the record industry these days, the cycle of working for a young artist is an incredible thing. We were on the road with 'Tambourine' for a year, and then I took some time off and was gearing up to going back in the studio, and by the time I did that, I was dropped," Merritt says of her Lost Highway deal. "I hate that the time passes so fast, but at the same time being on the road for a year is not all that conducive to writing good things, at least for me. I just think it's really hard to have perspective on yourself that's accurate when you're giving so much of your energy and perspective away on stage. Then everybody is being so nice to you, it's not an honest place."

With time on her heads and some breathing space needed in her head, Merritt took a break. "Kind of is not the word," says Merritt when asked if she needed a detour from her musical life. "I was feeling really burnt out. I was doing a tour in Europe. I just thought, I don't really know what's next. Everything was kind of finishing up. I'm just going to go to Paris and regroup. I thought it would be a vacation, but I ended up being really happy and feeling free and revitalized and writing away almost immediately. I had this excuse to go home, and say, 'guess what, I'm not coming home for awhile.'"

"I had been there very briefly. I love the French thing. I'm not fluent, but I speak okay. I think it's really musical language. I've always been passionate about that...I literally Googled "Paris apartment and piano,' and I found an apartment with piano in it, so (I decided) I'm going."

Starting in summer 2005, Merritt went back and forth between the U.S. and France. It was not hard for Merritt to fade into the background in Paris, which suited her just fine. "It definitely initially was an extremely anonymous situation, which was great. I knew one person. I didn't wear any make up. I pulled my hair back every day. I was just the opposite of being on stage, and I was just free of all the things. I just stepped outside my life for awhile. Not only was I anonymous in a big city, but I was just gone really (from my regular life)."

Merritt did not go to the City of Lights with the intention of writing songs. That notion did not last very long though. "It really surprised me," she says. "I had some strange instincts about it because I did rent a flat with a piano. I never felt more in life that I had nothing to say. I was really surprised when I started writing the way that I did."

Why did that happen? "I think it was a combination of powerful things. One was that France is really inspiring, and another one was that I had put my life in this wide open place that I could just give myself very fully to creativity. I had stored up all of these things when I was on tour. There's so much history and so many ghosts in Paris. It was very easy to believe in (things) that I was feeling that Paris pays attention to its intimacies and its details."

Merritt thinks she took a step forward with "Another Country," satisfied that she mixed it up musically even if some might gripe about the musical diversity. "Bramble Rose" enjoyed a country vibe, while "Tambourine" adhered to a soul/rocking sound. The new disc is softer and reverts to the country/rootsy sound, particularly in the instrumentation.

"I do agree that I took a step forward with this record and was able to emphasize a lot of different kinds of musical elements and choose something that is my own more than ever before. I really disagree that that this is record is this genre, that genre. I believe in roots music period. I don't believe in segregating the blues from country because they're the same thing. I think it's as creepy as regular segregation," she says laughing. "I think that folk and rock and soul and country are all fingers of the same hand. It's really a detrimental thing to try and say use this one and not the other one. All my favorite artists were Ray Charles and Van Morrison to Carole King did not obey the rules of genre. It's silly."