There is a circuitous quality to Alejandro Escovedo's latest album, "Real Animal." The album is essentially a work of autobiography that details, in allusory song form, the cultural, musical and personal path that Escovedo has carved over the past 30 years. 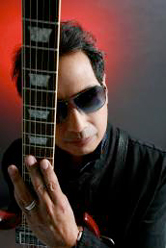 To tell the story of "Real Animal," it becomes necessary to tell Escovedo's story, which he does to a certain extent on the CD. And while the songs offer specific glimpses into Escovedo's long, storied career against a musical backdrop that encompasses roots, punk and glam rock, alt.-country and soulful electric folk, they also simultaneously mark the inexorable march of personal time and earthshaking musical eras.

"If you look at 'Slow Down,' it's about time passing, and 'Golden Bear' was a great metaphor for the music and the passing of time," he says. "In 'Slow Down,' there's that line says, 'Let me take your hand, there's something I want to show you, you can hear the music in the wind out on the pier.' That kind of vibe was so important, that image is so strong as far as my personal youth experience. There's a lot of things that I want to do. From a Buddhist's perspective, you could say that you die every day and every moment, maybe. You watch it go by, and hopefully I've learned a lot. And I hope these stories continue with my children."

Escovedo is no stranger to using his life to inspire his work. His 2002 album, "By the Hand of the Father," was based on the theater production of the same name that Escovedo had written in tribute to his adventurous, storytelling father and the generation of Mexican-Americans who maintained their home country's culture and values while integrating into American life. And Escovedo's first two solo albums, 1992's "Gravity" and 1993's "Thirteen Years," were painful song cycles about his devolving relationship with and eventual suicide of his wife Bobbie Levie. Clearly, Escovedo has never been a stranger to baring his life and his soul in his songs.

"Real Animal" is a bit different because it encompasses nearly the whole of Escovedo's life. Born in 1951 in San Antonio, Texas and raised in Southern California, Escovedo was destined to travel a musical path. His father, Pedro, was an in-demand mariachi player, and his older brothers Pete (father of Prince protŽgŽ Sheila E.) and Coke became high profile percussionists for the likes of Santana and Malo in the late '60s.

As a teenager, Escovedo surfed, partied and absorbed the music scene in area record stores and clubs. It was during this period that Escovedo developed a love for The Stooges, Mott the Hoople, the Rolling Stones, Velvet Underground and T. Rex. After moving to the Bay Area in 1970, Escovedo enrolled in college as a film student and conceived a short movie about a fictional punk band lionized as "the worst band in the world."

Always a Friend
(with Bruce Springsteen and the E Street Band)

To sell that idea, Escovedo and some friends played the band in the movie, but to their surprise, they weren't bad. They christened themselves the Nuns and attracted a decent following; their big claim to fame was their opening slot for the Sex Pistols at San Francisco's Winterland Ballroom in 1978, the night the Pistols dissolved.

That same year, Escovedo moved to New York where he became a member of Judy Nylon's band, followed by a succession of others. He lived at the Chelsea Hotel at the same time as doomed Sex Pistols bassist Sid Vicious and his girlfriend Nancy Spungen.

Escovedo's national profile rose when he returned to California and hooked up with Chip and Tony Kinman, the brothers who had fronted The Dils, a punk band that routinely crossed paths with the Nuns. The trio formed Rank and File, perhaps the first of the true "cowpunk" bands of the '80s; their debut album, 1982's "Sundown," remains a classic of rootsy country rock.

"I always felt like Rank and File never got their due," says Escovedo. "People never appreciated what great songwriters Chip and Tony were, how great that band was, how way ahead we were of the ones that followed. Whenever I read something about the alt.-country thing, Rank and File is rarely mentioned. We just wanted to be a band in the great tradition of bands like the Faces or the Stones that stuck together and hung out together and faced the world together. Like a gang or a club."

After Rank and File relocated to Austin, dissension caused Escovedo and drummer Slim Evans to depart. When the Kinmans returned to California, Escovedo remained in Austin where he formed a new band with his younger brother Javier in 1982. The True Believers became an immediate sensation around Austin with their three-guitar attack (the Escovedos along with veteran string strangler Jon Dee Graham) and glowing critical acclaim of their eponymous 1984 album, a Rolling Stone feature and relentless touring seemed to foreshadow success.

Sadly, the band was flushed in the EMI/Manhattan Records merger and, once again, predicted success ended in dissolution and defeat. Their 1987 sophomore album sat shelved for 7 years until Ryko finally reissued their debut and released their second album together on a CD called "Hard Road." It was a small victory and cold comfort. "It wasn't until I was in that band that I realized the dynamic of two brothers being in a band is very difficult," says Escovedo. "It's very complex and sometimes heartbreaking and sometimes extremely rewarding. I love my little brother so much, and we weren't always getting along so well. Javier is the true rock star in the family."