Since coming to the attention of the bluegrass world at large through his sizzling fiddle work as a sideman for Dale Ann Bradley and Rhonda Vincent, Michael Cleveland has been a regular winner at the annual IBMA awards as in five times Fiddler of the Year. 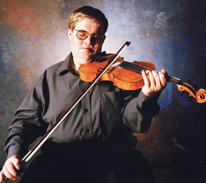 Born in Henryville, Ind., he now lives just a few miles down the road in Charlestown, a short hop across the Ohio River from Louisville. At 27, he finds himself at the helm of his own successful band Flamekeeper (the title track from an earlier solo release) and eagerly awaits the reaction to "Leavin' Town," the band's Rounder debut, which came out in July.

The band also features a core of veteran professionals - bassist Marshall Wilborn, a longtime stalwart in the Johnson Mountain Boys as well as the band of his wife, Lynn Morris; mandolin picker Jesse Brock, also an important part of Morris' band; and Todd Rakestraw, a lead singer and guitarist who co-founded Union Station back in the early '80s and was on hand when they invited teenage sensation Alison Krauss to join. Rakestraw, in fact, penned several of Krauss' early hits like "Gentle River."

Wilborn and Brock are standout singers as well, giving the band a dynamic vocal sound, and Cleveland exults that it's a dream to have talent like this with him to rely on night after night. "When you get pickers like that, " he says, "You don't have to worry about their part, all you got to worry about is you. It's just fun to play and stand on stage with them every day."

When it comes down to arrangements, solo breaks and other intricacies of the bluegrass genre, having that kind of experience to draw on reaps immediate dividends. "Everyone has their own ideas, and that's what's good about it, you can get people's different takes on it...they all have the experience and know-how to really come up with neat ideas."

Also a southern Indiana native, Rakestraw dropped off the scene for several years following his Union Station period and resurfaced in time for Cleveland to grab him for Flamekeeper.

"I've known (Todd) since August of '07...we really didn't (know each other previously). I had heard his tunes and not known that he was the one that wrote them... of course, I had the Alison Krauss 'Too Late To Cry' album, and I'd heard 'Gentle River'...but I'd definitely heard his writing without knowing it was him. Yeah, he's a really good singer." Rounding out the Flamekeeper lineup is the youngest member, 21-year old banjo player John Mark Batchelor. Though he didn't know it at the time, Batchelor is a natural musician, who only six years ago took up the five-string almost on a dare, Cleveland says.

"The way he told me, he picked up a banjo because somebody told him that he would never be able to do it...'you'll never be able to play it like this (some other player)'. So, that pretty much was a challenge, and he just went after it."

"He was good when he signed on (March of '07)," Cleveland continues, "And he got the gig. But however good he was then, he really put some time into it. I've never seen anybody live with the banjo the way he does. I mean, he will play banjo constantly every day, it's like breathing with him. He's a fast learner too, and he's got a real good feel for bluegrass."

For his own part, Cleveland acknowledges he's something of a musical blotter, soaking up the influences of the hundreds of fiddlers he's listened to since taking up the instrument at the age of four and synthesizing them into his own distinctive style.

"At one age or another, I've tried to listen to everybody. I still try to listen to everybody. I really like Kenny Baker's fiddle playing. Benny Martin was a huge influence of mine. Bobby Hicks, Chubby Wise - I listened to some Vassar (Clements). And for all those, I'm leaving out quite a few. Red Taylor, who played with Jimmy Martin. Pretty much anybody who played with Bill Monroe - he had a lot of great fiddle players - and Scotty Stoneman, I really like his playing. Dale Potter, that's another one. Tommy Jackson. Like I say, I've listened to a whole lot of different people...and if I heard a lick I liked, I would try to incorporate that. I listened to Paul Warren, of course. The list goes on and on."

Cleveland is quick to acknowledge that, even before taking on the challenge of running his own band, his blindness presented obstacles to his music career that his parents have been instrumental in helping him surmount. His father John, a truck driver by trade, has taken on most of the management of his son's career and the band's business,

"(Dad) doesn't play music, but he's got a real good ear for someone who's not a musician...If it wasn't for him, I would have a harder time doing this. Especially when I was playing for other people, if it wasn't for him and my step-mom Elaine, I would have had a hard time even getting to the gigs I was supposed to play. I do know people who are able to take me around, but everybody has stuff going on. And dad, he does a lot for the band as far as making sure we're all where we need to be, and keeping the books, and all that kind of stuff."