What is Heidi Newfield waiting for?

Heidi Newfield was in West Virginia about to play a show at the University of West Virginia. That would be a solo show, by the way, and not another date with Trick Pony because Newfield has long since left that group and just released her first post-Trick Pony solo album, titled "What Am I Waiting For." Naturally, one wonders what Newfield may have been waiting for, so to speak, regarding this whole new solo artist experience. 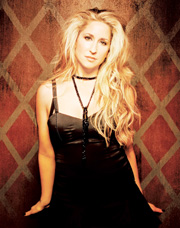 Newfield also wanted to call the shots. "In a band, it's really difficult because you compromise an immense amount," she states. "It was great training for marriage or a family," the California native adds with a chuckle. "I feel like I wanted dig down a little deeper, musically, and that's what I felt like I could do on my own, more than I could with the band. I also wanted to work with some other people, production-wise, and in the studio."

Nevertheless, do not get the incorrect impression Newfield thinks any less of her former band mates, Keith Burns and Ira Dean, the other two-thirds of the Trick Pony stable. In fact, these two gentlemen helped Newfield write the title track to her debut. "Sometimes you say things, and you can hear my voice and the inflections and so forth, and in print, it sounds like I'm putting them down," Newfield clarifies. "I certainly don't mean that at all. I have a great respect for the music that we made. I have a great respect for the chemistry. We had a lot of fun together. We made a lot of music together, and I'm very appreciative of all of that."

Trick Pony also had plenty of commercial success during their brief, three-album run as well. The group's 2001 self-titled debut went gold, and the singles Pour Me, On a Night like This, Just What I Do and On a Mission, all went top 20 on country radio. The trio also took home awards for Top New Vocal Group on the ACMs and an AMA award for Favorite New Country Act.

Additionally, much of the reasoning behind this split had to do with how each member of Trick Pony had changed personally over the years, which is totally separate from any issues regarding musical direction.

"I needed to leave the group because it was simply time," Newfield says. "People change. They evolve. They go through times in their lives where they're willing to be in certain situations then they go through periods in their lives where they're not willing to put themselves in certain situations. I think we were all kind of changing as individuals as much as we were musically. I wanted to grow musically, but I also wanted to grow as a person. I think everybody was going in different directions."

Newfield knew that moving on was the right decision. But that transition, which separated her from the security of a group setting and presented her with the challenge of carrying shows all by her lonesome, was daunting at first.

"The first few shows; there was definitely a little trepidation, a little bit of fear, no doubt," she admits. "I was so used to that chemistry. I was so used to looking to my left and to my right, and seeing those guys that I could play off of every night. Then, boom, it's just me and my band up there! That went away rather quickly, in a healthy way. It went away because I've got this great band, and the camaraderie onstage is fantastic. There's a lot of laughter. There's a lot of creativity. There's a lot of musicality. When you're crazy in love with the songs that you're singing and you're on stage with a group of people that you enjoy making music with, suddenly all that fear and that little bit of worry of, 'Can I carry this?,' starts to dissipate, and I began to just walk up there, with every single show, and gain confidence. And I realized, 'Hey, I've done this before. I've been here before. I can do this.' And with a little laughter in my voice, (I) walk right out there and enjoy it."

A primary reason why Newfield is so pleased and confident with her new solo material is the fact that respected industry veteran, Tony Brown, produced it. "He was my first choice all the way around in producers," Newfield says. "When he took a meeting with me, he asked what records I was digging and whose music I was digging. We were just getting to know one another on a different level. We'd known one another in the past -- you know how the music industry is; it's a really small wheel. And we'd see each other at industry events and things like that - awards shows and such. He was always extremely nice. And I found out in working with him that he is every bit as kind and genuine as a human being on the inside, as he is on the outside. Getting to work with him was truly fun, much less adding a lot of swagger to my step every day getting to walk into the studio. And he was present for every step of it. He was into this project. Clearly, the second that guy walks in the studio the respect level on everybody's part is so high."