Thirty years in the making, "Willie and the Wheel" rolls

It's barely six weeks into 2009, and already it's been a banner year for Ray Benson. In January alone, Benson took his band, Asleep at the Wheel, to perform in Washington, D.C., during the presidential inauguration festivities. A couple of days later, he met the newest little member of western swing's most recognizable band, as Asleep at the Wheel drummer Dave Sanger and vocalist Elizabeth McQueen brought their infant daughter Lisel to Benson's Bismeaux studios for her own little debut. 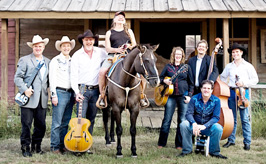 But it's the month of February that may mark one of the watershed moments for the nine-time Grammy-winning group, which for three decades has carried the torch passed along by the likes of western swing icons Bob Wills, Milton Brown, J.R. Chatwell and Cliff Bruner. In early February, the Wheel released a 12-song collection of classics with Willie Nelson handling the vocals.

Yet it's neither a Wills tribute nor a roundup of the tried-and-true western swing standards. Missing from the set list is Faded Love and San Antonio Rose. There's no Stay All Night (Stay a Little Longer) or Roly Poly.

Rather, "Willie and the Wheel," released on Benson's own Bismeaux Records label, is a collection of songs drawn straight from a hot, crowded 1930's Texas dance hall. Bawdy blues cuts like Fan It and I Ain't Gonna Give You None of My Jelly Roll bump into such classics as Right or Wrong and Corrine Corrina and pop standards like Won't You Ride in My Little Red Wagon and the instrumental South, featuring Paul Shaffer and Vince Gill. 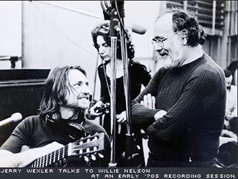 As much as they'd like to take credit for this historic collaboration, the project wasn't something hatched by longtime friends Willie and Ray over a couple of beers.

No, the roots of "Willie and the Wheel" runs back some 35 years and comes not from a country music suit looking to turn a quick buck, but from an unlikely American music icon. Jerry Wexler, who shaped the sound of pop music by producing the likes of Aretha Franklin, Ray Charles, Bob Dylan and Dire Straits, also produced two of Willie's albums, including the hugely influential "Phases and Stages," before his popularity as a country music superstar shot through the roof.

The legendary producer, who died in August at 91, had hoped to do a western swing album with Willie in the early 1970s before he left Wexler's Atlantic Records for Columbia and his rise to superstardom. But it never came to pass. Still, the concept never completely fell off Wexler's radar, said Benson.

In 2003, Wexler was getting rid of all of his records and offered his collection of western swing LPs to Benson, whom he'd known since the 1970s. "A few weeks later, a box arrived with 20 or so LPs from Jerry," Benson said just after holding baby Lisel for the first time. "It was songs originally on 78 RPM records reissued on albums, mostly cult collections from the 1970s. I had a few of them already."

Asleep at the Wheel performing

As Benson pulled the records from their jackets, there were two handwritten letters next to certain song titles. Benson didn't think much of it initially, but asked Wexler about the letters the next time the two of them talked. "The initials were WN," Benson said. "When I called Jerry to thank him for the records, I asked him what they were. He said 'WN' stood for Willie Nelson."

Four years later, Benson got a call from Willie and his manager, who told him that Wexler thought it was time to do the western swing CD. Asleep at the Wheel had just completed the critically acclaimed "Last of the Breed" tour with Willie, Merle Haggard and Ray Price, which showcased western swing and Texas country music. "They asked me if I still had the LPs," Benson said. "It took me a second to realize what they were talking about, and once I did, I told them 'Sure, yeah, I still have them.' I'd heard the bulk of the material he'd sent me. I pulled them out, and sure enough there were the 'WNs' next to certain songs, so I went to work."

From a list of nearly 40 titles, Benson and Wexler eventually narrowed the album to 12 songs. Benson said Wexler, who's listed as the album's executive producer, was deeply involved in every aspect of the project. He suggested horns for certain cuts and fiddles and steel guitars on others for a traditional western swing sound. Despite being a producer renown for his work with legendary rock and pop stars, Wexler had an amazing feel for all musical styles, Benson said.

"Jerry was 91 and still sharp as a tack," Benson said. "I've known Jerry for a while, and I was amazed at his knowledge of great American music. He was a big fan of roots music, artists like Robert Johnson, Bob Wills and Jack Teagarden."

More than just a fan, Wexler was credited with coining the term "rhythm and blues" and was involved in producing some of rock and pop music's biggest hits. Besides producing classics like Big Joe Turner's original version of Shake, Rattle and Roll, Wilson Pickett's Midnight Hour and Aretha Franklin's Respect, he was able to add the Rolling Stones and Led Zeppelin to Atlantic's stable of stars.