Raul Malo finds the "Lucky One"

After beginning his musical ascension as lead singer with the eclectic country band The Mavericks during the 1990s, Raul Malo has continued to shed the shackles of limitations heaped upon him by the Nashville machine and corporate labels. He has never cared being forced into a particular genre. That is why now free of all conceived expectations, Malo came out swinging once again with his first original solo material in seven years. 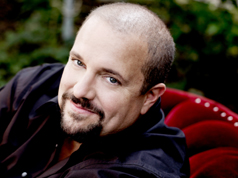 On "Lucky One," Malo draws from his past to create a record full of diversity. "I grew up in Miami, and listened to all music, with no prejudice or conceptions of what genres even were at that time," says Malo, 43. "Music was music to me. My parents were Cuban, so I was always around different styles of music growing up. We had all the great rock and roll records from the '50s and '60s, plus all of the Cuban music. On Saturday nights I would sit in front of the TV and watch Lawrence Welk and Hee Haw. I never knew Hee Haw was country music. I just knew that it was different and liked it."

"To me, all music is inner related. We are always so quick to try to put someone's music into a certain category, just for someone's own piece of mind. They can't just let it be music. All of these walls exist not because of the music, but because of the people around it. I never thought of music like that."

"When The Mavericks were first coming out, we were, of course, considered country, but to say we were only a country band was a disservice to us and other country bands as well. Don't get me wrong, I love country music, but we encompassed a lot of different things. I never felt compelled to only perform those types of songs. I remember George Harrison saying that Chet Atkins was such a huge influence on him. So, to me, it is all closely related," Malo says while on tour from his San Francisco hotel room.

The music industry itself has certainly changed over the years as well, and Malo predicts it might end up for the better. The current economic struggles are forcing some belt tightening within the music business. According to Malo, this may bring real music back to the forefront.

Lucky One live on the Billy Block Show, Nashville, March 2009

"They have relied for years on technology to save for talent, but I do not think you can do that any more. Because of the economic turn, I think that the people that will survive are the ones that actually have talent. In many ways, we are already seeing that. I think it will go back to the times of smaller labels that concentrate on a few acts that they really like and believe in. It is already changing because the money that labels used to have is gone. So, something has to give. I honestly think it will be a good thing for our industry."

Technological advances have also created new opportunities for the release of music. The introduction of the iPod is something that Malo enjoys.

"We are very resistant to change. More often than not, change is always for the good. I honestly wish we still had the old record albums. I've got 12,000 songs on my iPod, and the CD is quickly disappearing. The iPod eliminates all of the clutter. You know, the other day I downloaded from iTunes the Springsteen record of the Pete Seeger sessions that he did a couple of years ago, and it came with a video booklet of the making of the record. It also had some concert footage, and it even had an electronic booklet of the record. You can see it all right on your computer. If this is the wave of the future, I am alright with it. The funny thing is, the artwork you get from iTunes is more like the size of the old records. So, ironically we have bitched for years about how useless the artwork on a small CD is, but now we get back to artwork meaning something again."

"This will not be the end of the music business. We will actually revert back to the days of what real music was. It will not be run by corporations, and people who know nothing about music. It will be run by those who have a love for the music, not the money. The numbers will be smaller, we will no longer hear about someone selling a million records a week or that kind of bull that gets doctored up by someone."

"I can go down the list of stuff that gets doctored up in Nashville. When Garth Brooks sells his records at McDonalds for $9.99, just so he can outsell The Beatles, that is bull. You are not outselling The Beatles. It is just a number that only you care about, and no one else cares at all. Those days are hopefully coming to an end. Smaller labels like Big Machine, they have a small roster and are doing outstanding. They are selling records and are doing it right. There is hope for the future."

If Malo's new release is any indication, the future looks bright. The 12 original Malo compositions are deeply layered with a variety of passion and vibes. Produced by Steve Berlin of Los Lobos, Malo's writing, arrangements and vocal talents are all fully displayed and quite mesmerizing. "When I sat down to write these songs, only So Beautiful was done in front of a piano. All others were just me and my guitar. That is how I write most of my music."