At first blush it would seem an odd fit, backing a female folk-bluegrass singer working on her debut album with Elvis Costello's drummer, Tom Petty's keyboardist and plopping Led Zeppelin's bassist in the producer's chair. Sure, her brother gets to accompany her on guitar, and a former band mate adds a mandolin run here and there. Yet her steel guitarist isn't known for his Nashville riffs, but, instead, for West Coast-influenced licks for rockers Peter Case, Sheryl Crow and Wilco. 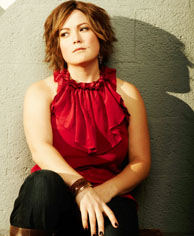 It would appear to be a recipe for disaster, a one-album flameout. But in the end, does it all fit? In a word — harmoniously.

To understand why Sara Watkins assembled a studio full of rock luminaries for her self-titled debut on Nonesuch Records — as well as the likes of Tim O'Brien, Ronnie McCoury and Gillian Welch - takes an understanding of just who she is professionally. Watkins, of course, is one-third of the Grammy-winning, gold record-selling band Nickel Creek, which broke down so many musical boundaries this decade that not only are they still a staple of bluegrass specialty shows on radio, but they even crossed over to alt.-rock stations.

Yet, unlike Nickel Creek mates Sean Watkins, who plays guitar on her record and released his first solo album outside Nickel Creek a decade ago (he's also her older brother), and Chris Thile, who has carved an impressive solo career that dates back to the early 1990s and now covers everything from bluegrass to classical, Sara Watkins never quite saw the need to break out on her own. "I knew I was going to make a solo album at some point," said the 27-year-old Watkins during a phone conversation from Milwaukee. "I'd never really had anything to say, and I knew I didn't want to just make a fiddle record."

Rather than release relatively meaningless collections of songs merely to capitalize on her popularity as Nickel Creek's fiddler who also contributed a song or two to each of the band's five albums, Watkins chose to slowly, methodically build not only her catalog, but also widen her circle of musical colleagues.

A large portion of the network came through festivals that Nickel Creek would play. One of those people happened to be Led Zeppelin bassist John Paul Jones. The pair ultimately toured together in 2004 in a group called Mutual Admiration Society, which included Nickel Creek, Elvis Costello drummer Pete Thomas and Toad the Wet Sprocket's Glenn Phillips. During the tour, Jones encouraged Watkins to make a solo album, adding that if he wasn't allowed to produce it he would never speak to her again.

"He was great to work with," said Watkins. "John doesn't present himself as a rock god. He is a rock god, and he's an amazing musician. He's part of Zeppelin, but he's so much more than that. He's so smart about music. But his main goal was to assist me in making this record. And he made me feel like a million bucks."

It may seem more than ironic that a member of the famed rock group worked on an album with a sweet-voiced female bluegrass fiddler. Watkins's release comes about a year after Led Zeppelin vocalist Robert Plant teamed with Alison Krauss for the critically acclaimed five-time Grammy winning album "Raising Sand."

While Watkins has no delusions of such massive success for her project, she says teaming with the legendary Zeppelin bassist or the timing of her album had nothing to do with "Raising Sand." "People bring it up in interviews," Watkins said. "It's a strange coincidence. I had no idea Alison was working with Robert until the record came out."

Bringing in longtime Petty keyboardist Benmont Tench and steel guitarist Greg Liesz also was Watkins' idea, although it wasn't as if she was trying to find the most prolific musicians in Los Angeles to fill out the studio. Watkins has played alongside Tench and Liesz for the past several years as part of the Watkins Family Hour, a relatively informal gathering of L.A.'s top pickers headed by Sara and Sean most every Thursday night at Largo, a small music and comedy club on Fairfax Avenue in Los Angeles.

Considering Sara Watkins still makes her home in Carlsbad, Cal. (Sean lives a couple miles south in the funky coastal enclave of Leucadia), a weekly trip is no big deal for the pair. "I've always lived in San Diego," she said, even though she recorded about half the record in Nashville. "It works well for me. The important thing is being close to L.A. in terms of the music scene, especially with the Watkins Family Hour. I love Nashville, but it's better for me to be near Los Angeles."

San Diego County also likely offers a measure of comfort. She grew up in Vista in San Diego's rolling North County, developing her musical chops on fiddle under the tutelage of multi-instrumentalist Dennis Caplinger while honing her skills on stage and in the studio with Nickel Creek. At a concert in early May at the La Paloma Theatre in nearby Encinitas, Watkins mentioned the historic theater built by Douglas Fairbanks and Mary Pickford in the 1920s was the location for her first video with Nickel Creek.

The Watkins Family Hour gigs at Largo also allowed Watkins to slowly develop and evolve as a solo artist. She discovered how to front a band — often made up of L.A.'s musical A-listers — but she also built her confidence as a singer and songwriter. "Vocally, I actually felt more confident on this than any other record," she said. "The Family Hour was crucial to me as an artist. It's allowed me to experiment with songs. I knew what kind of songs I liked, and I thought maybe four years ago it was time to do my own record. But then I thought I'd wait a little longer."

The Family Hour also allowed Watkins to hone her songwriting. Seven of the 12 songs she wrote made the cut for the new album, including 2 instrumentals. One of the instrumental numbers, Jefferson, is named after a particularly scenic view off Jefferson Avenue of the Buena Vista Lagoon in her hometown of Carlsbad. But she admits there have been a few clunkers along the way. "I've written a lot of crappy songs," she said. "I'd get a lot of feedback too. 'Yes, that's interesting, but I don't know what you're trying to say.' "

The Largo gigs also allowed her to experiment with cover songs. The Jimmie Rogers chestnut Any Old Time is a particular favorite. "We've been doing that for a couple years now," she said. "The great thing about this record is, I knew these songs, I knew the players and I've worked with everyone who's on it over the years. It's part of my musical upbringing."