Saving Appalachia from mining one song at a time

Daniel Martin Moore and Ben Sollee have each made a significant impact on the folk/bluegrass scene over the past few years. Sollee is a classically trained cellist and a member of Abigail Washburn's Sparrow Quartet, and his acclaimed 2008 solo debut, "Learning to Bend," was an amazing blend of bluegrass, folk and jazz. Moore returned from a Peace Corps stint three years ago and sent an unsolicited demo of his Nick Drake-like songs to Sub Pop; against all odds, they signed Moore immediately and set him to work on his first album, 2008's "Stray Age." 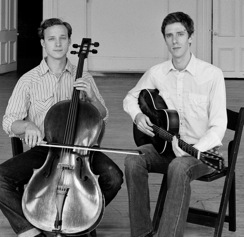 Two years ago, Moore and Sollee met at a Lexington, Ky. show and began making small talk about music and their commonalities when the subject of Appalachian strip mining was broached. It was a subject that both Kentuckians are passionate about - Moore is a member of anti-strip mining group Kentuckians for the Commonwealth and an active fundraiser - and so they were determined to do something concrete and creative to shed light on the subject.

"We were chatting about mountaintop removal and talking about music and that sort of thing," says Moore. "We'd both been working on material and thinking about doing some kind of project, and it just kind of evolved. We ended up playing a show together; I opened a show for him in Lexington, and the next day, we went down to Knoxville and did a show. It was a positive experience all around, so we talked about doing some recording, maybe an EP, and it turned into a record."

That record, "Dear Companion" (produced by My Morning Jacket's Jim James), is an evocation of Appalachian mountain music and a culture that is slowly being eroded by progress and technology. The aforementioned mining process of mountaintop removal (MTR) is among the more destructive forces having an impact on rural Appalachia. MTR is a coal mining option where the ground above a coal seam is charged, detonated and removed to expose the seam, avoiding the costlier method of deep shaft mining. It is also incredibly toxic to the environment.

"It's the most aggressive kind of surface mining," says Moore. "They remove every bit of the mountain above the coal seam. It varies in depth, but sometimes it can be 500-600 feet of the mountain detonated and pushed into the valley. There are all kinds of issues that crop up from that, the biggest being pollution. In every valley, there's a stream, and that pollutes the surface water, the groundwater and causes all sorts of health problems for the people around it, and that doesn't mention the health of the environment."

The direct consequences of MTR are physical contamination and the ever-present threat of floods from the poisonous slurry ponds, the by-product of the mining operation. The more subtle danger is in the dismantling of Appalachian society as families grow weary of the lessened quality of life from pollution and jobs lost due to MTR and move away from areas where they've lived their entire lives.

Relating these issues to the region's musical heritage in ways both subtle and direct is at the heart of Sollee and Moore's work on "Dear Companion."

Flyrock Blues is a pretty straightforward song," says Moore. "Flyrock is a term used on mine sites during big explosions for the stuff that goes shooting through the air. Sometimes it ends up down in the hollers where people live, and it ends up in people's homes and destroys property, and it's killed people before."

Part of the awareness that Moore and Sollee hope to raise is by enlightening people to the complicity that many of us share in supporting the practice without knowing it. "If people stopped buying coal, then they wouldn't have to blow up mountains to get to it," says Moore. "It's all about the culture we all contribute to. In Kentucky and Ohio and all of Appalachia, most of our electricity comes from the burning of coal. Every time we consume electricity, we are contributing to the destruction of that place. We're all doing it, it's not just some big, bad company that's doing this. We're all contributing to this problem, and we all need to figure out together how to do it if we want it fixed."

MTR and its rippling effects rarely get any media exposure because it's a less than sexy news story ("You say 'Exxon Valdez,' and everyone knows what you're talking about," Moore notes), so any kind of heightened attention is helpful. "Dear Companion" is just such a high profile event, but having James attached to the project gives it an even greater cachet. "I know, it's very true," says Moore. "And to be frank, it's something we were all very aware of. He believes in the project and he believes in the goal. It's about getting the word out. He realized that his involvement would bring more attention to it."

When Moore and Sollee first contemplated doing an EP, they discussed bringing in outside musicians to elevate the proceedings, and Sollee suggested James, who he was long acquainted with in the Louisville scene, as producer.