Drive-By Truckers turn it up for their "Big To-Do"

When Drive-By Truckers hit the studio early last year, the Alabama-via-Athens sextet were fresh from experiences that would have a profound effect on their next album. The Truckers had been on a long road trip supporting their last album, 2008's stripped back and country-flavored "Brighter Than Creation's Dark," which had been largely written on the band's acoustic Dirt Underneath Tour. They had also just recently wrapped up the whirlwind sessions that produced Booker T's Grammy-nominated "Potato Hole" album. 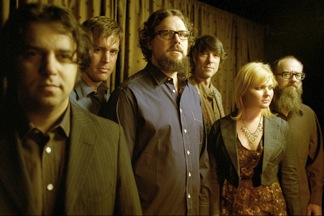 Between the relative quiet of "Creation's Dark" and the jumper cable inspiration of working with Booker T, the Truckers were ready to turn their amps up to a Spinal Tappish 11 and loosen some shingles.

Thus was born the Truckers' incendiary new album "The Big To-Do." "The rock part was definitely intended," says DBT front man Patterson Hood. "We pretty much all decided, well before we started making it, that that's what we wanted. We really wanted to make a concerted effort at it being that way."

Clearly, the erratic road atmosphere of the Dirt Underneath circuit and the band's mindset during the writing process gave "Creation's Dark" a unique sonic profile. The resultant tour for the album was a huge factor in determining the direction of "The Big To-Do."

"We're all proud of and really, really fond of the last record, but it was kind of all over the map," says Hood. "It was rambling and long, and it went through the gauntlet of every style of music that means a lot to us collectively as a band. It was very much the record we wanted and needed to make at that time, but having done it and then having tried to turn that record, which is kind of introverted, into something you could take out and perform in noisy clubs night after night and still be true to the material, it was a really huge challenge. We decided pretty early on that next time out, we want to make a record that roars out of the gate. It was time."

Given the meandering in-the-neighborhood-of-country nature of the Drive-By Truckers' catalog to date, the time may well have been ripe for the full-on roots rock intensity of "The Big To-Do." While the Truckers have delivered a decent selection of great rock songs across their catalog, they've merely touched on their potential to do an entire album's worth of blustery, twang-edged rock.

"We really have never made a record that did it to this extent, other than our live record, which is 10 years old this year; we always refer to that one as our punk rock record," says Hood with a laugh. "The first two records were kind of countryish, and 'Southern Rock Opera' certainly had a lot of big rock moments but it also had a lot of winding roads about it, too."

The songs on "The Big To-Do" bear the same urgency in the studio as they exhibited in the writing process. From the slinky The Wig He Made Her Wear to the scorching Daddy Learned to Fly and Birthday Boy to the beautifully subdued-then-beautifully noisy You Got Another, this was a set of tracks that was definitely kicking at the Truckers' creative barn door...but not before a slightly fallow period for Hood, DBT's primary songwriter.

"I had to learn how to write on the road," says Hood. "We're on the road so much, and now we've all got kids. It used to be I'd tour, then come home and write. Now I come home, and there's babies around, and I needed to be a good daddy and not be locked away in some room in the back of the house with the 'Do Not Disturb' sign out. It was tough, and because of that, I started writing a whole lot less for awhile. I've always been one of those writers with a bit of a hit-miss ratio; my process is I write everything but the kitchen sink and go back and figure out what works and what doesn't. Writing less songs, I was having the same ratio, there was just less of the good ones to go around at the end of the day. It was a little traumatic. I've never had what I considered a dry spell before. Writing's always been my number one thing."

The songs that ultimately comprised "Creation's Dark" in 2008 helped clear Hood's internal logjam and set the stage for the flood that resulted in "The Big To-Do." The Truckers' other two songwriters stepped up as well; bassist Shonna Tucker contributed You Got Another and (It's Gonna Be) I Told You So while guitarist/vocalist Mike Cooley brought in Eyes Like Glue, Get Downtown and the song that Hood identifies as the best song on the album, Birthday Boy.

"It was written after we had already finished and even mastered the record," says Hood. "He figured he was too late to have it on this record, but we were like, 'No, no, no. Surely we can make this happen.' We ended a tour, we went straight into the studio and cut it in one day, mixed it the next day and mastered it a couple of days later and inserted it into the record. Up to that point, I had really felt like, as proud as I was of the record, there was one flaw with it, a missing piece of the puzzle. And as soon as I heard that song, I knew that was the missing piece. I was like, 'That's the missing third track.' I even knew where it needed to be in the sequence. It totally took everything to the next level."