Summertown Road picks it up

Forty years ago, Jack Hicks was a teenage banjo sensation, good enough to land jobs with some of the biggest names in bluegrass. After disappearing from the scene for a few years, he didn't have to look any farther than the next house over for an opportunity to get back into the swing of things. 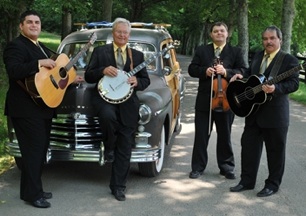 "I had quit picking and had decided to start again, and John (Rigsby) was playing for Melvin Goins. And Melvin was my next-door neighbor. So, when I started back picking again, I told Melvin if he ever needed anybody, to holler at me, and he did."

Rigsby, an outstanding fiddler and mandolin player, had also served a couple of stints in Ralph Stanley's band, and he and Hicks found they had a lot in common, musically.

"So, John and I were picking together with Melvin, and we decided to form a band after a while."

That band was Summertown Road, and since forming in 2008 they've generated substantial buzz on the circuit despite the absence of any recordings - until now. Their self-titled Rounder debut hit stores in late March. Joining Hicks and Rigsby were guitarist Bo Isaac and bassist Randy Thomas, with Rigsby and Isaac as the primary vocalists.

Isaac began his bluegrass career with Judy and Junior Isaac, which led him to become a part of the Kentucky Opry. He then formed the band Shades of Time. From there, he joined the musical groups of Ernie Thacker, Evans and Larry Cordle.

"(John) knew Bo, and I had picked some with Randy. I had never picked with Bo, but I had picked some with Randy. So, I talked to Randy, and Randy was picking with Bo. It just kind of all formed there," Hicks says with a laugh at the serendipity nature of it all. "We just talked about it one day and kind of got it all together. I owned the studio where we recorded all this, so we just got together and started recording."

"Actually," Hicks continues, "We recorded first. It just took this long to get it released. It's been done for a year or so. But we hit the ground running, we really did. I've been real fortunate, a lot of promoters still remember me from all the years I did play, and a lot of them remembered John Rigsby from his days with Ralph Stanley - we were real lucky. Last year, we worked 144 days, and that's good for the first year with a band, you know."

Now 57, Hicks is a Kentucky native who grew up in Ashland, close by where Kentucky, Ohio and West Virginia come together to produce some of the most intriguing and dynamic traditional music in the country, some of the more ancient of the sounds that Bill Monroe, another Kentuckian, synthesized into what came to be known as bluegrass. His parents both fans of the music, Hicks took up the banjo at an early age and soon found himself being mentored by Eddie Adcock, by then a legend by way of his early work with the Country Gentlemen.

"Eddie was great to me when I was a kid. Not only did I love his picking, and still do, but he would call me back when I was just a kid, just 12 or 13 years old, he would call me every couple of weeks just to see how I was coming along. I loved the way he put things together, it was different from anybody. He played that Merle Travis-style guitar, and he did it on a banjo, too, and I used to love to do that. Eddie could just play anything. Any song he wanted to play, he just played it."

There were other influences, of course, for an impressionable young teen.

"Don (Reno), and Earl Scruggs, and J. D. Crowe, Earl, especially, his drive, you know. We all want that, we all want Earl's drive. And his tone, he was so good - that's something I don't think any of us will ever find, because it was all in that right hand."

By the time he got out of high school, Hicks was proficient enough to get himself hired by Jim and Jesse and also Del Reeves, before getting the opportunity to play with Monroe.

"Bill used to have a festival here in Ashland. I had picked some with him there, and I used to go up to Bean Blossom, Indiana, and I'd pick with him up there. When Rual Yarbrough was playing banjo with him, (Monroe) always told me, when Rual quits, I could have the job. But in the meantime, I was with Jim and Jesse. Then I left them and went with Del Reeves. After that Bill had a spot open, and I wasn't working, so I went to work with him."

After spending three or four years with Monroe, by his own accounting, Hicks moved on and ended up playing for Lester Flatt, The Whites, Sonny James and Conway Twitty before leaving the music business for a decade or so and settling into a life of ongoing entrepreneurship.

"I owned grocery stores, and tractor-trailers, just all kinds of things," he laughs. "Pizza parlors. I did all kinds of stuff. I owned a bunch of businesses and worked them, you know."

Looking back on his early years, he reflects on the experience of having worked for pioneers like Monroe and Flatt and the lessons they imparted.