For their fifth album, "Wildwood," North Carolina quartet Chatham County Line decided to expand their bluegrass sound by utilizing instrumentation rarely a component in a bluegrass band: the drums.

As CCL frontman Dave Wilson explains, Tift Merritt's drummer/husband Zeke Hutchins had contributed to the "Wildwood" songs in their seminal state, so it was only right that he should have a hand in finishing them as well. 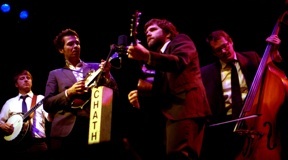 "We felt like this was a record that could reach out to a lot more people than just the bluegrass audience, who we really appreciate for all the support they've been giving us for years," says Wilson. "We were playing these songs with Zeke, just loosely jamming, and that was probably two years ago. It seemed organic that the songs had drums to begin with, so when we were in the studio, Zeke was local, and we just called him up and said, 'Hey, man, bring it on. Let's do this.'"

Before bluegrass purists hyperventilate over this turn of events, it should be noted that CCL - Wilson on guitar, Chandler Holt on banjo, upright bassist Greg Reading and multi-instrumentalist John Teer - have no designs on rewriting the bluegrass rule book. In road dates around "Wildwood," they will be appropriately drummerless.

"Adding a drum set up is almost more trouble than reward," says Wilson. "We travel really tight. We have just our instruments and a couple of microphones, and we really dig the short sound check. We want to give people a completely organic show; what you see on stage is exactly what you hear. To add drums, we'd have to change our stage set up so much that it becomes a different band."

Chatham County Line has hardly been a traditional bluegrass band from the start. Coming from rock and country backgrounds, the quartet met at Raleigh's most notorious musician crash pad, conceiving CCL over beers one night in 1996.

"When we stand up on stage in our suits with a single mic and four or five acoustic instruments, we're using a style blueprint that was printed by the Del McCoury Band and the instrumentation blueprint of Bill Monroe," says Wilson. "We're just changing the plans a little bit as we go. We didn't grow up in a musical vacuum, we listened to all sorts of music growing up."

"I didn't learn about bluegrass until college - it's more natural for me to not play bluegrass, to tell you the truth - but it struck me as being the most pure and beautiful yet energetic and soulful music. Plus you can tell a story on top of it, which is the most important thing to me as a songwriter."

Wilson sees a creative arc running through CCL's five albums, not in the conceptual sense that they're linked in some thematic fashion but as evolutionary steps that moved the band a little farther and a little higher each successive time out.

"The first record was, 'We want to be a bluegrass band,'" says Wilson. "The second album was, 'We are a bluegrass band, check us out,' the third record was, 'Hey, what about these songs and these stories that we really like?' and it could be a bit more mellow, and with number four, we brought in more pedal steel and piano. Greg's an amazing steel and piano player so why hide his talents? This one is just an extension of that."

"Wildwood" benefited from a great deal of pre-production, more than CCL had ever done for any album. In fact, they recorded at least two albums' worth of sessions - one in Wilson's basement and another at a friend's general store in Virginia - before entering the studio, using the actual general store track of Porcelain Doll for the album. And they had a great version of Blue Jay Way from the very first time they played it live at the Neighborhood Theater in Charlotte, but that recording didn't make it to the finished "Wildwood" set list because of an obvious production problem.

"We couldn't use it because some guy was very excitedly yelling all through the track," says Wilson with a wry laugh. "I didn't want to have to put his name on the album because he was definitely part of the band on that track."

One of the other big departures for CCL on "Wildwood" is the absence of a big name producer - they've worked with Brian Paulson and Chris Stamey in the past - or any producer, for that matter.

This time around, Wilson served as the boardsman for the band, a slightly different role for him to play in the studio.

"After all those years of Brian Paulson and working with Chris, we just really learned how to work in the studio and what production was all about," says Wilson. "I said I'd stand behind the board and make decisions, and everybody was cool with it, so we just ran with it and tried to get everything to sound the best it could. We're all more than pleased with the results."