With the cover of "Panhandle Rambler" showing a vintage Airsteam, standing solitary out on the flatlands of the Texas Panhandle, one might think Joe Ely's latest offering would be a sedentary affair.

One would be wrong.

Instead, the 12 songs are more a Flamenco-accented travelogue of Texas. Streaming from the Panhandle, winding through the Hill Country, deep into Big Bend and across the Rio Grande, "Rambler" mines the stories of the inhabitants, some joyful and some not so much, but all with the skill of a seasoned raconteur with an authenticity almost unheard of on today's country radio. 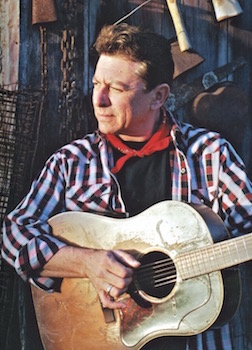 These are stories that evoke real people and real experiences and have a realistic tone as recalled by Ely. "I've earned the right through the years to be able to write in the first person," says Ely, speaking from the road in the middle of a tour somewhere between Boise, Idaho and Tacoma, Wash. "Even if they may not be 100 percent my own experience, they are my stories once I get them down. These songs have come from the last three or four years of stuff going on out there, outlaws, outsiders and cartels."

With liberal doses of Joel Guzman's accordion, the aforementioned flamenco guitar of Teye Wijnterp, and the omnipresence of Lloyd Maines, "Panhandle Rambler" is a collection of stories from the pen of Ely along with two gems by Guy Clark and Butch Hancock. Clark contributed the haunting "Magdalene," while Hancock providesd"When the Nights are Cold."

"Rambler" isn't showy or brusque, this is less Ely the rocker and a much more liberal dose of Ely the balladeer. Either way, this is a treat, with the artist at complete ease and in full control of all of his interpretive gifts. Still, like with all good art, some songs leave the bulk of interpretation to the listener, like the lead-off "Wounded Creek," taking a listen or two to fully understand.

Ely is a busy man with lots of irons in the fire. One of those irons, is his continued involvement since it's infancy with the Internet as we now know it and an interest in all things digital. Quite a surprise for anyone who doesn't know Ely very well.

"My brother got in to computers in 1981, and at first, I didn't see much use in them for me, but in 1982, things changed. They developed a card that could make a keyboard into a digital sequencer. About that time, my band had broken up, and I had about a year off, so I started messing with that. It was really just an experiment, but before too long I realized I had enough songs for a record. I presented it to MCA, and they liked the songs but they didn't want the computer involved. They wanted to re-record all the songs in a full studio."

"I understood that since it was all new then, but a few years ago I went back and listened to what we had done and realized that there was something there that we had lost when we re-recorded. So, I put the original digital recordings out under the name "Before '84" since the recordings had happened in 1983. The liner notes on that album were by Apple co-founder Steve Wozniak, who I had met years earlier through talking back and forth on the pre-internet bulletin boards. I'm not quite sure if we were the first anywhere to record a digital album, but I know we were the first in Texas."

Aside from the revved-up wild man who often appears on stage, there is also the reflective, colorful, storyteller, who captures the textures and depth of his characters in song much as an artist would on canvas. This storytelling has resulted in two published works, a collection of short stories and verse about life on tour "Bonfire of Roadmaps" and most recently, the novel, "Reverb."

"Some of the stories had some origins in my early website or bulletin board that we called 'Campfire Tales.' I wasn't sure how that would benefit our music at first, but it was an early way that we could put up tour schedules and stay in touch with the fans, and that all worked into what is now really the internet and we're still doing it today.

After more than 45 years touring the world with the likes of Linda Ronstadt, Tom Petty, Bruce Springsteen, The Clash, The Kinks, The Rolling Stones and Merle Haggard and all manner of the country pantheon, as a solo and as a Flantlander, Joe Ely has no shortage of stories to tell.

"It was almost like a Trinity. Jimmie Dale Gilmore was all about the old timey, traditional country sound. He knew all about that background. Really lived and breathed it. Butch Hancock was a real folkie and had all that background with the folk scene and the Woody Guthrie, singer-songwriter, coffeehouse stuff, and I brought the kind of country-rock stuff that was just starting to happen then with The Byrds' 'Sweetheart the Rodeo' and Gram Parsons and those guys. That is why the three of us together were something special."

"We were very broad. We all were bringing something to the table. I remember thinking I was the luckiest man in the world. Two great songwriters have taken me in, and now we can write songs without any boundaries. I remember Lloyd Maines saying we might need to play some more covers in the West Texas honkytonks, but we were packing them in with our own stuff."

"We may have helped open some doors for country and the type of Texas music that we were doing back then, that are still open today. I remember playing one leg of a European tour in the 1970's for The Clash and the second leg with Merle Haggard, and we played the same set in both shows. The European audiences were pretty good to me then, and they still are. I had played in Europe even before the Flatlander days and have been doing it ever since in one way or another.