Cox Family gets back to business

On the eve of the first new release by the Cox Family in nearly two decades, "Gone Like The Cotton," Sidney Cox reflects on the national media frenzy over "Back To The Future" and the date Michael J. Fox would materialize from 1985, and the parallels to his own family's story haven't escaped his notice.

"We've been transported to a time that was on hold for us. There's a lot of music life that's missing in between, and being able to revisit or come back to that time is extraordinary...Yeah, it was a trip 'Back To The Future'." 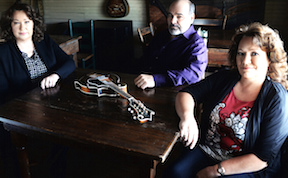 Louisiana native Willard Cox, a former oilfield worker and his four children (daughters Evelyn, Lynn and Suzanne and son, Sidney) took the full plunge into the music business in the 1980s, and their close harmonies won a legion of fans, particularly on the bluegrass festival circuit.

Among those early fans was a young Illinois-born teenager named Alison Krauss, then in the process of launching a substantial career of her own. Their meeting profoundly influenced both sides, personally and professionally, to the extent that Krauss has, Sidney agrees, become virtually a "fourth sister."

"With Alison, it seems like she's always been here. I don't look at a time in the past and go 'man, I wish it was like it used to be before Alison'...we share the same interests and love the same things. She might as well have been born in that house herself and raised with us, literally."

The Cox Family - I Am Weary, Let Me Rest

By 1995, the Cox Family had cut 3 well-received discs for Rounder, including a Grammy-winning collaboration with Krauss, "I Know Who Holds Tomorrow." Moving to the Asylum label, their next release "Just When We're Thinking It's Over" was also critically applauded. Though Lynn Cox had left the band, by 1998, they had already laid down more than half of their next Asylum project, with Krauss as producer.

" Then," says Sidney, "that phone call came that said, 'We're making some changes.' "

A top-down shake-up at Asylum left the Coxes out on the street with their unfinished album collecting dust in the vaults.

"That kind of put the fire out of the charge we were having from doing this record. This was something that was very special to us and to Alison as well. These were songs that we always wanted to cut, always were favorites of ours."

The Coxes took part in the "O Brother" phenomenon with a cut on the soundtrack and cameo appearances in the film itself. The music business had to be set aside in July, 2000 when an automobile accident near their Cotton Valley, La. home left Willard and wife Marie critically injured. Both survived, but Willard was paralyzed and is no longer able to perform. Marie recovered, but was already in a struggle with cancer that she lost in 2009.

"(To) have it stop put us at odds, not knowing what to do with ourselves. We communicate with ourselves at a music level, that's all we've ever done, and so we found ourselves not together on a lot of things. We split out into our own lives, 'civilian life' so to speak, and found ourselves wandering out there...caught up in all the things we were doing at home, what we were gonna do with ourselves, how we would handle what had been presented to us."

"It was a soul-searching time," Sidney remembers, "for us to go back and think about what we were about as a family and how we would handle that in making a new life, with a new lifestyle for us...(On the road) everybody's out there being in a 'comrade' type thing, and everybody's got the same goal. This time, we didn't. We found a goal in that time, that there was common ground in such hope as doing this record again. That kind of revitalized the life of our family, in just having that hope that maybe someday we could finish this record. That is what we're all about, it's what we came from."

Asylum had gone belly-up, and its catalog, including the never-released "Gone Like The Cotton," had been sold to Warner Nashville. A chance meeting and conversation between execs of the two labels led to a complete resurrection, with Rounder back in the picture.

And the "Back To The Future" experience of walking into the same studio they had left 17 years earlier and seeing Krauss and engineer Gary Paczosa in the same spots.

"I remember Gary spinning around in his chair," Sidney laughs, "and saying, 'Where have you guys been? We've been waiting for you.'"

The instrumentals for the dozen tracks had been laid down in '98 by an all-star Nashville cast, and Sidney says it was critical to preserve that original performance.

"There was something special in the studio that went on...it was more of a jam session-type experience, 'live' feel that you would get on older records and the way they used to do them, rather than just hacking them up with a bunch of overdubs."

"There weren't many things that we asked of them except to play what came from their hearts – and man, did they do it. That energy they had then was just folded and put on a shelf, it was trying to get out. It was (as) new when we heard it again as it was the day it was cut."