The song "Mystery and Wonder" is the centerpiece of Blitzen Trapper's eighth and latest album, "All Across This Land." It finds the band's vocalist and primary songwriter Eric Earley reflecting upon various songs and experiences over the years and vainly attempting to figure out what it all means.

Well I wrote this song when I was 17
What makes us write our lives man, you know what I mean?
And If I'm older now, it's all just an act
And after all of these years I wouldn't take a thing back 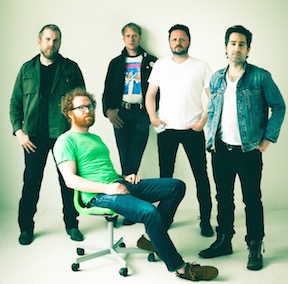 The upside to these reflective words is that, even after being at it for over a decade, Blitzen Trapper has still not lost the mystery and wonder of creating music. You can ask some of the most poetic and literate songwriters of our day about their inspirations, only to be met with blank stares. Some call songs blessings from God, while others credit their muse. Few, though, take full credit for the creativity with which they're blessed. Inspiration is a gift, to be sure, even if we may never quite know how to give credit to its cryptic giver.

Blitzen Trapper's latest ranges from rock that sounds straight out of a '70s AOR playlist, to the sad and sweet country of "Lonesome Angel." And it's both contemporary and nostalgic. Oh, and it's oftentimes a little louder than prior efforts.

"I guess part of it," vocalist Earley explains, "is we hadn't really made a rock record in a lot of years, so we were just kind of wanting to. I guess after touring a lot and sort of seeing the industry go towards live music and away from recorded music and stuff, I just felt like I wanted to record what we play on stage."

In a sense, this new music returns full circle to the group's genesis.

"When we started touring and getting going in 08/09," Earley continues, "so much of the music wasn't really folk music, kind of quieter with a lot of harmonies. We kinda started out as a rock band. We did, basically, with 'Wild Mountain Nation.' And then with the popularity of "Fuur," we kinda got cornered in this sort of this Bob Dylan, folk kind of thing. But we never really were that on stage. We usually have one or two folk songs on every record, but the majority of what we do is rock/pop, among other things."

"A lot of that record is nostalgic," Earley says, when asked to describe the inspirations for "All Across This Land." "It's a lot of sort of looking back at where we came from." He then clarifies, "I don't know if it's necessarily nostalgia, as it is documenting where we were when we were in high school."

And when Earley thinks back to his high school days, these memories are inextricably connected to his earliest rock and roll experiences and also to folks he plays music with today. "Mike (Van Pelt), the bass player, we played in a band together in high school," he adds.

"And in a certain way, it's not really looking back," Earley adds. "It's also about touring; what's going on now. It's about people you leave behind when you go on the road, and stuff like that. And I think 'Mystery and Wonder' covers a lot of time in my songwriting life, from my childhood to now."

"Cadillac Road" is about a real place in Earley's world. "Cadillac Road is an actual place. It's a road in the mountains outside of where we grew up. It's all logging land, and right now, it's no man's land. You can't really go in there. And if you do, you're in danger because the mushroom pickers will shoot you."

In November 2015, Blitzen Trapper appeared on Morning Becomes Eclectic, the popular KCRW radio music program. The date of the performance was Nov. 12, which just happens to be Neil Young's birthday. To mark the occasion, Blitzen Trapper played a spot-on rendition of Young's "Heart of Gold," the hit single from his "Harvest" album. When you hear Blitzen Trapper doing Young, it's fairly easy to recognize the strong connection between Young's folk/rock/country sound, and the kinds of sounds Blitzen Trapper incorporate into their music.

"I think his songwriting for me is really important," Earley says. "His levels of honesty and just his kind of laying everything out there and being really open about things. His lyrics have had a lot of effect. And then also the more general effect. He's one of the first guys to really bring country music and rock kind of onto the same page in the '70s and late '60s, which we do as well. He does a lot of hard rock stuff, but then he does really delicate acoustic stuff."

Although Blitzen Trapper is from Portland, Ore., Earley isn't really a fan of "Portlandia," the sketch comedy program that spoofs that Oregon city's culture. "Those people aren't from Portland," Earley quips. "Carrie (Brownstein) is from Washington, and what's-his-name (Fred Armisen) is from L.A.

It's not so much a thing where the cast of Portlandia is making fun of Earley's hometown, as it is jokes about hipsters in general. "I feel like they're more making fun of gentrification everywhere because the people they make fun of you run into in New York, Chicago. You run into it everywhere. Every city has a street that is basically Portlandia, in my opinion."

Bless their hearts, Blitzen Trapper continues to find a way to remain relatively pure and organic during a time when so much music appears to be manufactured to meet the superficial needs of hucksters and hipsters. Much like their hero Neil Young, Blitzen Trapper realizes that the best way to remain relevant during these changing tides of time is to stay true to their art. With "All Across This Land," they've created an album that could have come from any number of musical eras. Today's hipsters may well have picked up on its virtues, but tomorrow's archivists may love it just as much.