Hull lifts a weight off her mind

Reaching her early twenties, Sierra Hull found herself beset by the same kinds of emotional angst and vulnerability that most of experience coming face-to-face with the challenges of life stretching out ahead. In her case, though, introduction to adulthood came at the age of 16 when she recorded her first Rounder release, 2008's "Secrets," and set out on a touring schedule that would make her one of the rising young stars of bluegrass. She managed to work a college education into the mix, making her way through Boston's prestigious Berklee School of Music. 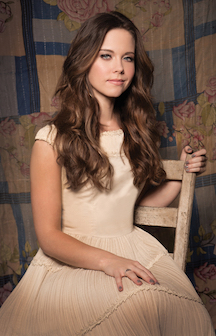 Following another bluegrass release, "Daybreak," in 2011, she set her sights on her next project, but found that her muse was taking her in directions she had not anticipated. Having already laid down several tracks, Hull felt she was at something of an impasse when she decided to call in Béla Fleck to help produce.

"I had already recorded six tracks...probably a year or so before I even started talking to Béla...and a lot of the tracks were the same songs. 'Weighted Mind' (the eventual title track) was one of the songs, 'Compass'...'Wings Of The Dawn,' 'I'll Be Fine'...but (they were) produced differently because there was more instrumentation - a little bit of drums, a little bit of electric, but you know, (an) 'all acoustic' feeling - but still just a different approach than what I had done on the more bluegrass albums that I'd made. I kind of just had to get away from it for a while. I sort of got in a place of not being sure exactly what I wanted to do, and if it was the right thing to do - and so I got away from it for a while."

She pauses a moment and continues, "When I started working with Béla, I played him some of the stuff, and...he said, 'Can you just play something for me on the mandolin, just you by yourself? I want to hear what that sounds like, with nothing else'. I think it was 'Compass.' I sat down and played that one for him. He said, 'You see, to me that's more interesting, that's more compelling.'...We didn't know," she says, "that we would make an album this 'sparse' to start with."

The "sparse" aspect of "Weighted Mind" is that, while vocal help on a handful of tracks comes from Abigail Washburn (Fleck's wife), Alison Krauss and Rhiannon Giddens, along with a couple of banjo parts by Fleck, the entire focus is on Hull's voice and mandolin, backed only by bassist Ethan Jodziewicz.

"There was something exciting about thinking about taking the songs and making the mandolin and the voice the center in the best way possible," Hull says, "Like trying to figure out, well, if nothing else was there, if you take everything else away, what would I do? What would I come up with in that situation? And of course, (Béla's) got brilliant ideas to make just anything I come up with better. So we just started building every song on that idea, where I would go work on it solo for a while. Then he started saying, 'I think this could be interesting. What if you just did the whole album like this, like a real solo mandolin/voice record?'"

Hull pauses to laugh, continuing, "We didn't plan on having bass. We didn't plan on having voice, or anything. Then, as things would go along, I kind of thought...it would be nice to have one instrument on this song or whatever, and so then we decided bass would make sense, and would probably be a good overall addition to the whole album - so that's when we got a recommendation for Ethan."

That recommendation came from Edgar Meyer, whom Hull calls one of her "bass heroes." Jodziewicz had been one of Meyer's students.

"I didn't really know (Ethan) at that time...I looked him up and thought, man, this guy is good!" She pauses again to laugh and says, "I met him when he was coming through Nashville, and we decided he was our guy. From there, we decided (on) bass, and then the harmonies were kind of a later thought. As we got into it, we still figured we wouldn't even have harmony. So, a few things got slowly added, and I was like, 'Béla, you should play something too, that would be fun!' So, 'Queen of Hearts' was one I kept thinking he would sound really cool on, so he decided to play."

Hull wrote or co-wrote all but one of the dozen cuts on "Weighted Mind." The writing and production paint a portrait of a young woman confused and bewildered by the world around her as she leaves childhood behind. She admits that much of the music came to her through real life, but the frequent eruptions of laughter as she talks suggest she hasn't turned into a chronic mope.

"I think the clouds have cleared up...anybody that knows me knows I'm a naturally happy person. I'm very blessed in my life, and really, even on those worst days of being down about, you know, whatever, something that just doesn't feel like I'm in the right place or something, I still also realize I've got it a lot more fortunate than most people. But I think what happens is that..."

She stops to frame her thought a little more clearly before saying, "I'm a very kind of emotional person in general...I tend to write more when I'm feeling more sorrow, I guess, than when I'm happy. If I wrote songs about when I was happy, I'd probably have a lot more songs, truly, than I would the other way around. But for some reason the sound of the music that goes with songs that are more about (sorrow), like even musically I think, sometimes I'm just more drawn to...at this point in my life. I'm not sure why, but that seems to be the natural thing right now."

Hull is aware that "Weighted Mind" is several steps removed from the bluegrass that her career has thus far been built on, but suggests it's just another door that's been opened for her.

"It's so funny, because I know it's not a bluegrass album in the sense of banjo and fiddle, and fiddle tunes, and 'upbeat,' and the structure of the song. I know to say it's a bluegrass album would be kind of inaccurate, but there's this weird part of me that sort of feels like it wasn't an intentional decision to do that, and it's not an intentional decision to say I'm 'leaving' bluegrass, and I'm never coming back, or something like that."

"I don't feel like I've 'left' bluegrass, and maybe that's funny to say, but I feel so much a connection to that music, still...I just feel like this is one album of many that I'll make, I hope, over my lifetime, and who knows what the next one will be? I just want to try to stay true to what I'm feeling at that point in time, and not force the bluegrass – the traditional bluegrass sound, I guess I should say – if that's not what an album or the songs are trying to be on their own."

"But I love bluegrass music," she concludes, "and it will always be home to me. So, any opportunities I can have in the future to even play traditional bluegrass, you know, I totally welcome that and hope that continues to be a part of my musical world, whether it's 100 percent of what I'm doing for my solo shows or not. I want to have all kinds of projects going on."