Aubrie Sellers just may be onto something on her debut – garage country. After all, we've already witnessed traditional country, new country, neo-traditional, country rock, pop country and bro country.

Sellers, a 25-year-old Nashvillian with a big time musical pedigree who released her debut, "New City Blues," in January, said the moniker came to mind as her bio was being written. "I sort of was talking about the sounds, and people would ask me what it is, and I'd say it was country. (But) I don't feel that accurately describes it. It's got this trashy sound. I think it's garage rock. The garage describes the rawness of it, the element of it and the drive."

"This whole record is electric, and it has a lot of that very grungy guitar sound and also some sort of very spaced out stuff," she says from her Nashville apartment. "The drums are...very big. When I talk about it being trashy, I talk about the drums...I have had a lot of influences from old country to old bluegrass to rock obviously, Led Zep obviously. Every thing that I love has a rock quality and is very soulful. All of that influenced the sound."

"New City Blues" may have been three years in the making, but Sellers was born with music in her blood. Her mother is Lee Ann Womack, and Sellers is almost a vocal dead ringer to her far more traditional country-sounding mom. Her father, Jason Sellers, put out a few albums on BNA in 1997 and 1999, played bass for Ricky Skaggs, and gained recognition as a songwriter ("Don't You Wanna Stay" by Jason Aldean and Kelly Clarkson, "Sunny and 75" by Joe Nichols). 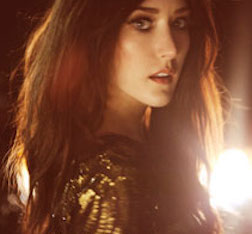 Sellers did not have the typical upbringing, but she wasn't complaining. Womack home schooled her daughter on a tour bus. "Most of the time, I was in the business," Sellers says. " I grew up around music obviously."

"My mom was on the road, (and) I was experiencing the whole music thing. I always did music growing up."

But Sellers wasn't necessarily gearing up for a musical career. "I wasn't sure that was my own career goal until around three years ago," says Sellers with an easy going laugh. "I found some other things that I was interested in that separated myself from the world at least for a little while."

That would have been acting, which she started when she was eight. She even went to the Left Coast to study at the Lee Strasburg studio. "I was learning everything I could," she says.

But music was never too far away. "I felt a need to write, and then I loved making music, and I loved that I could control the whole process and do what I wanted," says Sellers.

"I got my first guitar when I was 12 or 13. That's when I was playing guitar. I wrote, too, in high school. I sang background. I was always doing stuff with music as well."

Apparently, Sellers felt a push-and-pull with music. "I was trying to rebel against it. (But) I kind of realized I'm supposed to do this."

Sellers attended Middle Tennessee State University for a year, but her calling lay elsewhere. "I just felt like 'what am I doing here?' I just started writing and decided 'let's do music,'" she says with a laugh.

But the idea of making an album was not so clear. The first song on the disc, "Light of Day," was penned in 2012. "Four years that I technically started writing for it," Sellers says "I didn't know at that time that I was absolutely going to make a record. I had a bunch of songs, and in 2013, I went in for the first time to track. I didn't have a label, and I really took my time with the process. I was highly involved in everything that happened with the production. I went through a lot of different people to mix it. It just took a long time for me to make sure that everything was 100 percent."

The result was 14 songs produced by Frank Liddell, her stepfather, who also helmed Miranda Lambert releases. Sellers says she took a hands-on approach. "You don't list yourself as a producer because if you're an artist, you don't list yourself. Obviously I was very involved. Frank is an amazing producer. Every artist he works with, they sound like themselves. The record doesn't sound like Frank. It sounds like Aubrie, or Miranda or David Nail. I've obviously watched him work for along time. At the end of the day, I knew he was going to take great care with it and facilitate my vision...it was great I got to do this my way."

Many songs focus on strength of character, blazing one's own trail and railing against falsehood. On the traditional country of "Losing Ground," Sellers sings, "You can't just dope me up /When I'm down on my luck / I don't need mirrors and smoke." On "Paper Doll," Sellers proclaims, "Not always proud of who I am/But at least I know where the hell I stand."

"I know that about myself," says Sellers about being a straight shooter. "That's something that I write about and talk about a lot. Growing up around the business a lot and in the entertainment business, I...have some x-ray vision. I can see through people. I see how people behave when my mom's in the room and not in the room. (Some are) phony to advance their career. I'm still not over it. I still write songs about that. That'll be something that I continue to do."

"Do I sound like other stuff on the radio? Obviously not. That's why I didn't go to a major label. The country world is still very much radio driven. If you don't have a number one, they think you've failed."

She self-released because "I didn't try to get on a label with putting the record out. My original idea was to make the record and shop it around. By the time I finished, I didn't want to take it to labels any more. I was afraid that they'd try to change me. I've seen people go in, and (the labels) say they love this and then change it. I just wanted to make sure that I had 100 percent creative control mainly over the music, but every other aspect of it."

Sellers has garnered positive reviews since the CD came out, made a national TV appearance and is headed for tour dates that include StageCoach in California in April.

Sellers seems determined to do her career her way. "I've seen many people sign a record deal and not get anything released. I've seen it happen over and over. I least have proven that's there's an audience for my music...When Steve Earle and Dwight Yoakam came out, they sounded very different from everything else at the time. They've had great long lasting careers. I don't think being an outlier means you can't you can't be in the same game as everyone else."

"The best thing I've learned from my mom and everyone in my family is to make sure you put the focus on the music and not worry about the other elements - meaning don't compromise yourself. Them encouraging (me) helped me stick to my guns when I was making the record and helped me by myself."