Dale (The Real Deal) Watson has been releasing hard country albums since 1995 and shows no signs of slowing down on his most recent release, "Call Me Lucky." 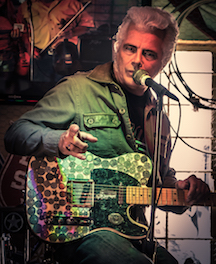 As for the title, Watson says, "The same place where most of my songs come from, my fans. There are two girls who never miss a show when we travel through Wisconsin, and they get a picture made at every show, with one on each side of me kissing my cheek. One time they apologized for being such a hassle for me, and I said; "Hey, I'm just lucky," and a song came out of that."

Similar stories are attached to most of the self-penned songs on the album. For instance, Watson says "The Dumb Song" stemmed from a female fan coming to a show after a car accident with an arm in a cast and still on pain medication against doctor's orders. "I told her that was pretty dumb, but I guess we all do things we shouldn't do some times, just because we want to."

Watson wants everyone to know that the pretty brunette on the album cover is his girlfriend, gifted Austin rockabilly singer, Celine Lee, his duet partner on the cut "Johnny and June," a plaintive tune about being so close one cannot even consider one without the other. By design, several songs are intentionally evocative of a sound or a feel associated with Memphis, where Watson has a home, Elvis Presley and of course, Johnny Cash.

In fact, several songs could have been Cash tunes from several periods throughout his career, "The Dumb Song" could've easily been part of Cash's humorous catalog, fitting in with "Look At Them Beans" or "One Piece At A Time," while "You Weren't Supposed To Feel This Good" is a Cash homage in production and delivery from the start. "Run Away" could be sandwiched somewhere between Cash's early standards "Home of the Blues" and "Tennessee Flattop Box" with almost no changes at all.

"Tupelo, Mississippi and a '57 Fairlaine" is a modern day tune about cruising through Tupelo, Miss., birthplace of Elvis, with his sweetie, enjoying the simple things in life like a to-go burger at Johnnie's drive-in, in a classic car with the top down, no more no less. Ending the road trip by pulling into Memphis, he speaks of the envy and yearning he see in the faces he passes and acknowledges that he has felt the same in his own experience. This modern day pilgrimage along the journey Presley himself made moving with his family from Tupelo to Memphis is not lost in the story, although Presley is never mentioned, nor is the joy in the telling. In Watson's words, the car, the girl, the place, "that's heaven to me."

Watson prides himself in writing simple songs and getting the story told fast, a trait he says was suggested by none other than Tom T. Hall. The trucker song, "David Buxkemper," is about a real farmer rancher from the LLano Estacado region of far northwest Texas, who trucks his own crops and then hires out for the rest of the year.

"A friend of mine, the Reverend Horton Heat, knew him better than me and told me about him. Eventually, he emailed my fan page. I thought that he had an interesting name, and I try to have at least one truck driving song on every album. We texted back and forth, and he told me about his life. I got to meet him after the song was finished. I'm lucky to have loyal fans who've been with me a long time." One song is for his own mother, a sentimental and self-explanatory tale called "Mama's Smile." N texting was required.

Four songs somewhat belie the otherwise Memphis-centric production. "Haul Off And Do It," which could've easily been a Faron Young or Carl Smith staple in their heydays, complete with the neckerchiefs and Nudie suits. Likewise, it is easy to close your eyes and hear Keith Whitley putting his spin on "Inside View," a country walk, dance tune which would feel right at home on any of his set lists from the late 1980s. "Restless," which is a song that seems ripped from Waylon Jennings' mid 1970s wheelhouse right down to the tempo with a Ritchie Albright drumbeat on the 1 and the 3.

"We were playing around with tempos, and when we started in with the Waylon thing. It worked. It was intentional."

The biggest surprise is the final cut, "Who Needs This Man," a witty turn on the want ads that was done with Merle Haggard in mind. It may take a listen or two, but it is not much of a stretch to hear the Hag putting his stamp on this one.

With his grey pompadour that reaches the sky and the mid '70's Elvis sideburns, it might be tempting to write Watson off as a tribute act and arguably that is true if what you are looking for is a tribute to real country music honed in the honky tonk and refined on the road. Watson is 35 years in and still going strong.

Recording with his own band and carrying horns as part of his every day lineup, is an example and so is doing the same residency at The Continental Club in Austin on Monday nights (plus a monthly Friday or Saturday) for going on 20 years. Clubs like this are the lifeblood of live music and as he says, "there seem to be fewer of those places every day, some of my favorites are no longer in existence.

Watson knows he is fortunate to be out there on the road doing what he has been doing for 30 years now, and his dedication to recording "the Real Deal" country is a sometimes an uphill race. Maybe he would just say, "Call Me Lucky."