Tillis unlocks "Looking for a Feeling"

"It had been a while since I'd given my fans any new solo music," Pam Tillis explains, when asked about the motivation behind recording her album "Looking for a Feeling." Until recently, Tillis mostly busied herself by recording and touring with fellow country star Lorrie Morgan. "I had a batch of songs that I felt good about," she continues, "and, you know, you just get that itch."

"Looking for a Feeling" is an album that most satisfyingly scratches that itch, so to speak, with its fine batch of songs. Tillis gets writing credit for helping to pen half of these songs, all of which are built upon sturdy, traditional country instrumentation. 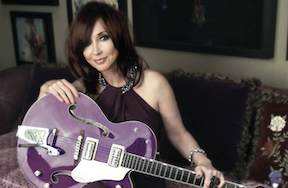 One of the standout songs is "Dolly 1969." Written by Bob Regan, it's a rewardingly nostalgic look back to that time when Dolly Parton was still a relatively new country star. "I got this black and white picture on my wall," the song begins, "of Dolly Parton standing by a Sedan de Ville/And it looks to be in the late Sixties/Cause it's all chrome and fins." With just these few phrases, Tillis immediately sends the listener happily back in time. Tillis describes it as "just a cool little song." It's also about an artist of her father's generation; however, in Tillis's case, her father just happened to be an icon himself, Mel Tillis.

Another one of the memorable songs, "Burning Star," features Mel Tillis. Not that Mel Tillis, though. This is Mel Tillis, Jr., her brother. This is another one Pam also helped write, and it is deeply philosophical and finds Tillis attempting to make sense of life here on Earth. "Hard to figure why things are the way they are/All that I know is we're living on a pebble by burning star." These words put life starkly into perspective."

Tillis is proud of his brother. "He's had songs recorded by Reba and Ricky Skaggs and Chris LeDoux and Billy Currington. As far as I know, we're the only family in country music that has had three people have a number one. "Sonny (as he's best known) co-wrote 'When I Think About Angels' for Jamie O'Neal. He's just a really great songwriter, singer, entertainer. We've written more than a few songs together."

Tillis has trouble putting into words the influence her father has had on her music. "His songs, and the kind of country songwriting I grew up with, it's more just like a part of your sub-conscious. It's just in your musical DNA. You don't really think about it. It just comes out naturally." Tillis also inherited his sense of humor. This, too, is an example of some shared DNA. "Our whole family is just a little bit off," she admits. "I think we've all got that little funny sense of humor."

One of the album's songs particularly brings her father to mind. "Lady Music" speaks to the addictive power of music – especially traditional country music. This, again, this is one Tillis has a writing credit on. It includes the telling line, "She reached out and touched him through that AM radio/Seduced him with fiddles and steels." "There are things that are real personal about "Lady Music" that reminds me of my dad's old cronies," she notes. "A lot of artists and songwriters that were of my dad's era. Friends of his."

The title comes from its first song, "Looking For A Feeling." "When you make an album," Tillis explains, "you are looking to create a feeling in people, and so I kind of went on this creative search, and the album is a result of that search or that journey, so it kind of fit."

Okay, so what kind of feeling is Tillis hoping listeners will feel with this album? "It's different for everybody," she replies. "You know what I mean? You could have two people listen to the same record and have completely different experiences. I think there's music being made out there that really makes you feel something. And I think some music doesn't make you feel anything. It just sounds manufactured. Or it sounds shallow. I think I just wanted to touch somebody in some way or connect with them. We listen to other people's music because it almost gives you permission to feel the way you feel. Music unlocks something in us."

By making an album of such decidedly traditional country songs, Tillis didn't intend to make any sort of statement about the admittedly non-traditional country music that's popular right now. "No, I think it's just me doing what comes natural to me," Tillis explains. "I think I'm past the part of my career where I have to be calculating like that."

Although traditional country is a big part of who Tillis is, and it is – if you will – in her DNA, she's certainly not beyond exploring other styles and sounds, as well. "I will always dabble in other things because I'm just musically adventurous like that. But country is just in my blood."

No matter what direction her next project may take, you can almost be certain she'll be writing new songs for it. There are some artists that only write when they have a definitive purpose to write their songs. Others write songs, though, whether there's a clear goal in mind or not. Tillis leans toward the latter on this spectrum. "I go through spells in writing," she says. "I'll go on writing binges," she adds, laughing. "I just saved up a bunch of songs and felt like it was time."

The natural thing for an artist to do with a new batch of recorded songs, is to go out and present these fresh creations live. With the whole pandemic, though, that cycle has been drastically interrupted. It's tough on performers and audiences alike. Fans want to see and hear their favorite artists in person, and artists want to connect with their fans in the concert setting.

"It is really weird," Tillis admits. "I've been touring for 30 years, and it is really, really weird. I'm taking it day by day, but it's a lot of emotions to process. I mean, our whole world was turned upside down, almost overnight. But I have hope for the future. But there's also some sadness, if you're honest. So, missing a concert is the least of some people's problems right now. I worry for my fans. I worry for everybody because I know how hard financially this is hitting everybody. And the music business has been clobbered."

Another one of the songs, "My Kind Of Medicine," speaks to how 'getting back to nature,' so to speak, can sometimes be the best remedy for our troubles. Tillis is practicing what she preaches, too. "I've done some gardening this spring," Tillis notes. "That's my outlet. Just gardening. I just love it. If my hands are in the dirt or mulch or something, I'm happy."

After our conversation, Tillis planned to plant some more flowers. Now that's a positive response to all the current negativity! To do something that makes you feel good, and also add a little beauty to the world. Whether its beautifying her garden with more flowers, or giving the world new and beautiful country music, Pam Tillis has her heart set upon making the world a better place, any way she can.