Even "traditional" music evolves. It's trite, but true, to say that today's artists stand on the shoulders of their forebearers. The deep roots of American traditional music tend to be lost, particularly those that came before the advent of recorded sound late in the 19th century.

But the evolution continues apace, and one of the blessings of current music production is that artists try new things, bending genres and voicings to develop their own. 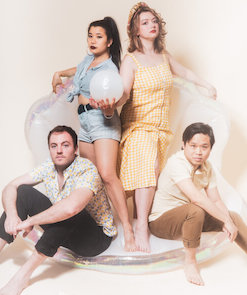 Here, now, is Twisted Pine, a four-piece band of young musicians that released "Right Now" on Signature Sounds Records. It's a bold and compelling reason to believe that traditional music will continue to grow and flourish.

Twisted Pine is Kathleen Parks on fiddle and lead vocals; Dan Bui on mandolin; Chris Sartori on bass; and Twisted Pine's newest addition, Anh Phung on flute. The band's instrumentation is the first signal that this is not Monroe's traditional music. Bui's mandolin and Parks' fiddle (sometimes with an additional C string) create a deep, textured lower range.

Bui explained that this serendipitous pairing arose over time, with band mates playing jams and coffee houses in Boston. "The pairing just found its own balance," he says. It all fits nicely. Without the typical guitar tenor tones, the mandolin and fiddle have "a lot of space to occupy."

The counterpoint of Sartori's rich bass lines create a unique voicing for Twisted Pine, according to Bui. Parks adds a strong vocal punch, and Phung's flute provides a top layer as her flute lines complement the low and mid-range tones of her bandmates. Bui's mandolin is rich in tone and brings lower registers into play with great effect.

Twisted Pine developed its early, bluegrass sound in a year-long residency at The Cantab, a hole-in-the-all bar in Cambridge, Mass. about six years ago. That summer, 2014, Twisted Pine took Best Band at MASS MoCA's Fresh Grass Bluegrass Festival in North Adams, Mass. and the same honor at the Thomas Point Bluegrass Special in Thomaston, Maine.

Parks says that Twisted Pine's music can't be labelled. "We're musical omnivores, I guess." "Right Now" features a couple of newgrass-style instrumentals that stand nicely on their own ( "Come Along Jody" and "Fogo de Chow").

But there's more afoot. Parks takes the lead in writing for Twisted Pine, although all the members have writing credits on "Right Now." Parks explains, "We were originally planning an EP and then (Signature Sounds) suggested that we release a full album."

Some of the selections, according to the band, are songs that have been in their live stage shows for a year or more, "and we just had them down and ready to record." Others, like "Tomorrow The Sun Will Rise," were written in the final stretch to finish the recording in late 2019. "Tomorrow The Sun Will Rise" is powerful, and timely, with a message of hope without the false cheer or bravado so common in current us-versus-them works. It sets just the right edge of persistence and optimism.

Twisted Pine plays with confidence and assuredness. Parks can handle a torch song ("Don't Come Over Tonight") with skill. There's a layer of complexity to the works in "Right Now" which Twisted Pine brings to their road-tested songs. According to Sartori, the band has a good sense of what works with the audience. "We know what to drop into the middle of a set to get the crowd back moving with us," he says.

The band is committed to building their career from the ground up. "We included some of our live show favorites so that our fans would be able to enjoy them on the record," says Parks. The newer material, they say, will fill a need for the audience to see what the band is up to now.

Sartori says that the band is booked in festivals through 2021. Each member is keen to get back on the road to reconnect with their audiences and showcase the new music on "Right Now." With all the pieces in place, and an exemplary record gaining attention, the Twisted Pine branch of traditional music will take root.