It was only fitting that Lindsay Ell had Lauren Alaina as a guest on her recent livestream concert. Alaina penned the song "Crashing The Boy's Club."

That is exactly what Ell is doing using her Stratocaster as a battering ram. Men have disproportionately occupied lead guitar, vocals and musical director roles. Not in this Calgary, Canada native's outfit. The scorching solos, huge belt range and musical direction all come from her.

As a songwriter, Ell's talent is evident on her sophomore album "heart theory." She was able to make a concept album about the seven stages of grief danceable and impactful at the same time. 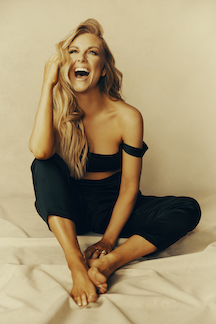 At 18, she toured with blues great Buddy Guy, who famously leaves venues immediately after playing his last note. One night he walked up to her with her guitar and said "Honey, we're in G" before inviting her to his carpet to trade licks. Judging from her own live show one can easily see how she was worthy of such an honor.

You don't see many frontwomen that are lead guitarists and musical director What drew you to that role?
I'm such a nerd and guitar has been something I've been drawn to since I was a little girl. Now, I'm able to incorporate it into my artistry and my songwriting. The fact is that there are not many female lead guitar players out there. I'm happy to lead the charge and show people, 'Yeah, you know girls can play guitars, too.' It's an incredible opportunity, and girls need not just to learn how to play guitar, but to make it a lead instrument. It's an incredible opportunity, and I love when female fans come up, especially little girls who say, 'Lindsay, you've inspired me to play guitar.' Having a voice in a band is a special thing. It's a special time for female artists in general and especially female instrumentalists. I think you are starting to see more come out of the woodwork, and hopefully, it is going to keep getting better.

What did you take away from opening for Keith Urban, Brad Paisley and Buddy Guy?
Whenever I'm in an opening tour situation, I view it as 'Okay, these are the guys that really know how to do their jobs.' I watch every single minute of their set. I love watching A listers deliver a live show. It is an art in itself. You think about how new artists have to work really hard; but you watch Keith and Brad do what they do, and they're working so much harder on another level. The hard work, commitment and dedication never stops. I love watching A listers do what they do. It's such a science, and they have everything down to such an intricate level.

For an album about the seven stages of grief and vulnerability, it is very upbeat. Was that your intention?
Yes, I love music that is counterintuitive. I love sad songs that make you want to dance. I love that weird juxtaposition in my brain. I wanted to write a record about the things I was going through which were heavy, but also music is therapy, and I didn't want to make it sad. It was completely my intention to make it upbeat. I love writing sad, up-tempo songs.

Given that have you been likened to Taylor Swift with the breakup theme.
Oh yeah, but as songwriters, what are we supposed to write about? Of course, we write about things that happening the world, but heartbreak is such a universal thing that we all go through in life. It doesn't have to be about a relationship. It could be losing a job or a number of many other things.

You have been compared to John Mayer and Sheryl Crow. They are not really classified as country. Where do you see yourself on the musical spectrum?
I think country as a genre has changed a lot in the past few years. It was once stereotypical with cowboys, pickups and traditional instruments. While we still have a lot of those artists around who are super successful, we have other artists like Kane Brown, Dan and Shay and Sam Hunt pushing the genre.
I think if John Mayer or Sheryl Crow were to release music today, I think it would sonically fit on country radio. Pop radio has become more urban and dance. A country music fan loves real songs with real lyrics, and that's what defines whether it's country or not and less the instrument choice on a record. I just want to make the most real music I can and then figure out how to record and present it.

Did you feel pressure making a sophomore album?
Yes, who doesn't? I knew if I wrote real music was as authentic as it could be, I knew it would be alright for me, and however it fell out into the world, it would play out as it needed to. Of course, I thought about it. It's just that pressure that's in the back of every artist's mind, but at of the day I think real songs win, always.

Are you working on any new music?
Yes, I'm writing a lot. It's just such a weird time We all want to know when things are going to get back to normal and when shows will resume Who knows? I feel the need to release something this year because music is therapy, and we really need it.

What do you look for in a writing partner?
I start with melody, music and rhythm and build a song out from there. I love working with other songwriters that work from the other direction, and we can meet in the middle in a cool way.

What do you make of the difficulty of women being played on country radio?
You are seeing more females on the radio. The ratios are slowly getting better, but it's a slow cyclical thing. When Shania, Faith and Martina were on the radio, country was so female rich. So, I do believe we will get back to that. It just takes time, and I think so many female artists are recording and releasing great music. It's great to see Maren doing her thing. That's what's going to drive change. We need to make sure there are ample opportunities for great music and not like we need so many girls and boys.