Back before the world retreated into makeshift fallout shelters for a year of Netflix binging, board games and what Warren Zevon referred to as splendid isolation, Nashville-based singer/songwriter Shannon McNally was invited to play a Music City benefit concert. The parameters were simple; bring in two classic country songs to perform with the venue's assembled house band. McNally had a blast, and, at her performance's conclusion, she experienced an epiphany. 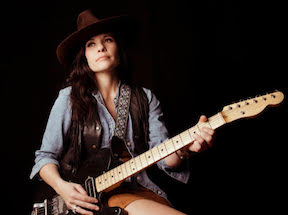 "I was real excited about it," recalls McNally from her Santa Fe, N.M. tour stop. "I've always been too country for pop and too Americana for country, so there was something liberating about playing country with a real good country band. And they were young players."

"Since I've been making records, I've worked with wonderful people but they've always been a lot older than me. It was sort of a light-hearted benefit, and I thought, 'Man, that was so good. Those guys could play anything. I bet they could even play Waylon.' And all of a sudden, it was like, 'What would you do if you could do anything?' And I went, 'Waylon Jennings.'"

Shannon McNally with Rodney Crowell - Ain't Livin' Long Like This

So, the seed was planted for "The Waylon Sessions," McNally's 14th studio release since her 2002 debut, "Jukebox Sparrows." Regardless of her "too-something-for-somebody" stylistic paradigm, McNally has been just right for her stellar peer group, guesting on albums by Jim Lauderdale, Son Volt, her friend/mentor Rodney Crowell, Luther Dickinson and Terry Allen and opening for Dave Alvin, Stevie Nicks and Ryan Adams.

The projects are significantly different; Charles wrote many songs that are indelible musical mile markers ("See You Later Alligator," by Bill Haley and the Comets, "Walking to New Orleans" by Fats Domino, and "(I Don't Know Why) But I Do" by Clarence "Frogman" Henry, among them), but Jennings' rarified strata of country superstardom was sealed by charting 96 singles with 16 number one hits, and 54 charting albums with 11 taking the top slot.

As performers, Charles is a cult artist while Jennings is a revered legend and an architect of outlaw country, country music's most enduring sub-genre, The first step was sifting through Jennings' daunting catalog, a task that McNally approached with passionate deliberation.

"I've listened to Waylon's catalog as much as anybody's catalog that I've really dug into," she says. "I sort of had two audiences in mind when I was picking songs, aside from the ones I liked and wanted to sing, selfishly. First, Waylon is truly beloved. People tattoo him on their bodies. He's loved on a psychic and spiritual level. You get a sort of high from Waylon, and I wanted to give that to people who really know him."

"On the other hand, I loved the way he walked through life and his outlook. I have a 12-year-old daughter, and I wanted to repackage Waylon so he stood a chance with a younger audience, so they could get past some of how he was always branded and packaged. His language is so direct and really from another time, but it's so universal and true that I wanted little girls to hear it and like it and internalize it, so it didn't feel scary and off-limits. I picked songs that I thought walked that line."

McNally was aware of the enormity of her goal, in terms of reimagining songs from one of country's greatest artists, but she didn't necessarily recognize the importance of her role as a woman interpreting Jennings' very masculine catalog. She didn't intend to shine a feminine light on the material, but its context became apparent the first day of recording.

"When I stood at the mic for the first session, it hit me like a load of bricks, like 'Whoa, whoa, whoa, wait a minute! I've got to make this happen!' It suddenly got very real," says McNally.

"It passed pretty quickly because these songs sing themselves, if you sing them with that kind of mindfulness. When you strip away the personality and just look at the words on paper, Waylon's songs are direct and square. I approached this project like Dolly Parton rather than Waylon Jennings. Dolly always hit everything on the nail head, with the big blonde hair, the boobs and cute as a button, but she was as outlaw as they come. Outlaw transcends everything else, and these songs are so beautifully poignant that once I started singing them, I didn't worry about it anymore."

Women singing Jennings' songs has been done... the 2015 tribute, "Outlaw: Celebrating the Music of Waylon Jennings," featured appearances by Alison Krauss, Kacey Musgraves and Lee Ann Womack, but McNally's full album treatment is a first. As far as McNally's song selections, Jennings' widow, Jessi Colter, who accompanies McNally on "Out Among the Stars," noted McNally's singular accomplishment with "The Waylon Sessions."