McMurtry rides "The Horses and the Hounds"

The title track to James McMurtry's "The Horses and the Hounds" plays out like one of those great running songs, namely Merle Haggard's "The Fugitive." "Lord I've been running for so long I just can't find a way back home," McMurtry sings, in that enjoyable deadpan vocal tone of his. When the Haggard song is mentioned, though, McMurtry responds, "I don't really remember. I just put words together and see if they mean something. To me, that song is about facing personal demons. The listener can make up his own mind. That's one thing about songs. It's for the listener, as much as for the writer." 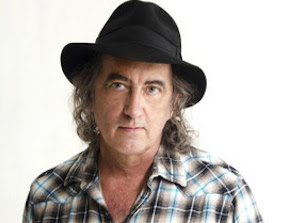 It's been seven years since McMurtry last released an album, but it's been even longer since this latest album was tracked. Its elongated creation reflects some of the new and ever-unfolding realities of the music modern business.

"We recorded this record in June of 2019," says McMurtry, "and I don't make a record until my tour draw starts to fall off. It used to be that we toured to support record sales, but now it's the other way around because we make our living off the road. We keep touring until it starts to thin out, and then hustle out a record. If we get a record out, you guys will write about us, and people will know we're coming to town. So, that's what sells the CD."

"It was getting to where my tour draw was falling, so I would have to make a record," McMurtry continues. "I'd known (producer) Ross Hogarth for 30 years. When I first got signed, he was John Mellencamp's engineer. He recorded and mixed my first two records. And then I had him mix the first record that I produced, which was 'Saint Mary of the Woods.' Ross had become a producer by then, as well as an engineer. And then later he produced Keb' Mo'. He got a Grammy for him. He's done a bunch of people."

"So, I thought, 'I need to go back to producer school because I've used up all the tricks I've learned.' I did the last record with C.C. Adcock, and then I did this one with Ross. And the songs really came together after we pulled the trigger on the record because Ross tired of waiting. He called up and said, 'James, here's what we're gonna do. I'm gonna book time at Groove Masters, and you're gonna finish the songs in time to do it.' That's how we used to do it when I was younger. Book the studio time, and then hustle the songs in. It worked. I got the songs written."

McMurtry has a unique way of writing songs, too. "I generally start songs, just as a part of my day," he explains. "I don't finish 'em until I have to make a record. It's a lot easier to finish a verse than it is to write the song it goes in. I usually hit the deadline. I haven't done it quite this way in a while. The 'Complicated Game' record I made piecemeal over time. I'd have a couple of songs, and I'd go to New Orleans and Mike Napolitano would record it, just vocal and guitar. I'd do a vocal and guitar thing to a click track, then I'd re-do guitars. I'd have a clean guitar track. Then I'd re-sing the vocals, so I'd have a clean scratch vocal. And then we'd build it from there. We'd say, 'Do we want drums on this?' So, that took a long time. A couple of songs at a time."

"I couldn't stop and spend six weeks in the studio because I had to be touring to make money. We'd do a couple of songs and then go back to Austin and get in the van, drive around, and make some money. This record, Ross's record, we just knocked it out."

There's plenty happening on McMurtry's new album, as there always is because he has always been a keen observer of human behavior. The album opens with vivid imagery creating the scene of "Canola Fields," which sometimes feels like a John Steinbeck story put to music.

One other song that particularly stands out is simply titled "Jackie." It tells the story of a female truck driver that also loves horses. It's also a bit of a tragedy. "She jack knifed on black ice with an oversized load," McMurtry explains during its last verse. "She wasn't going that fast, the responders all say," McMurtry's lyric continues, "how it ended that bad, we can wonder all day."

"It's a fictional character," McMurtry explains, "but there are shades of various people I've known. I've known a good many equestrian-minded women." Just as the album's title cut follows a long line of fugitive-related songs, this one fits in well with the 'tragic end' tradition in pop music. Only McMurtry's takes on these are more literate than many of the examples that came before him.

One of the album's best lines comes from "Canola Fields." McMurtry sings about "Cashing in on a 30-year crush/You can't be young and do that." For those of us with more than a few miles on the old odometer, his words clearly resonate. We never outgrow the need for love, and some never get over crushes" even after three decades.

"We've gotta have something to lord over the young," McMurtry jokes. "It's kind of what Bob Seger did with 'Night Moves,'" he relates. "I remember when that broke on the radio. I was riding in a station wagon. I was, like, 14. Somebody's older sister or brother was driving a bunch of us home from a freshmen party. This was a station wagon full of (mostly) 14-year-old girls, and this 30-year-old voice comes on the radio. And 30 to us was like geriatric. But those girls were just entranced with Seger's story. I thought, 'Well, maybe if I can do that for the 40-something crowd, it might help.'"

McMurtry is still impressed with Seger's hit song to this day. "That sound that he was doing at that time was pretty brave. That was straight out, well mic-ed acoustic guitar, which they did in those days" they didn't know how to wire things up like they do now" the production on that was not normal for its time. And it was really good. They had to know what they were doing because they couldn't just drag pieces around in wav forms. They couldn't fix things like they do now."

Now that touring is slowly opening up again, McMurtry realizes there were at least a few tangible benefits to his time staying at home. "That's one of the things I enjoyed about the lockdown - after two weeks of not being on the road, I noticed my back didn't hurt any more. I'm not hunched over a steering wheel, rattling down the freeway."