Steve Earle pays tribute to one of his mentors and heroes, Jerry Jeff Walker, on "Jerry Jeff," which follows his "GUY" tribute to Guy Clark and "TOWNES" tribute to Townes Van Zandt. Earle has called these projects a necessary form of therapy, as each of these great artists have passed on. 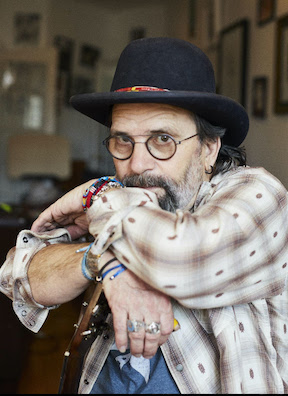 With Earle also demoing songs for his upcoming musical "Tender Mercies," inspired by the 1983 movie of the same time, he's a man that just can't seem to sit still for long.

"I don't really understand that" says Earle, responding to the whole concept of a leisurely life during a Zoom call from Portland. "I fish with a fly rod a little bit, which is about as quiet as I get, and I don't fish that much. You kind of have to shut up internally to cast with a fly rod. I'm able to make a living making art. It is something I feel like I was put here to do, and I've never had any doubt about that."

Earle performs a lot of "JERRY JEFF" album during his shows. "In the States, with very few exceptions, there's six," Earle says. "There's half the album. The people do really want to hear my songs, and I have 22 studio records and only four are other people's songs. It starts with Jerry Jeff Walker songs, and it's set up as a set of its own, and then we go into playing my stuff. There are some covers in the encore, there always are. Just because it's stuff that we want to play."

Earle says he's been itching to do album of his own songs after finishing the 'JERRY JEFF' album. "I've got some songs. I mean, look, it's not that I haven't been writing songs, it's just that 90 percent of what I've been writing has been for 'Tender Mercies.' And I'm not going to record that stuff and release it into the world until the musical's finished. I've got nine songs or something for 'Tender Mercies,' and I've written some other stuff."

"I've been co-writing a lot with kids in Nashville. Well, some of them are kids. Some are in their 40s, which seems like a kid now. Some of them are kids, 20-something. I've written with Miranda (Lambert) and a few people the last couple of years. With Miranda, I wrote the duet that's on 'So You Wanna Be An Outlaw' ('This Is How It Ends'). We have another song that I just can't get her to finish. It was her suggestion, but it was based on something I said. She hasn't written anything yet, so I want to make damn sure she writes something before I put it to bed. So, I'm working on that."

"I don't know if you remember 'Tender Mercies' or not, but the band that are characters in it, who were based upon Ace In The Hole because Horton Foote's nephew was the drummer in Ace In The Hole," Earle says of George Strait's band. "The idea was, those guys kinda worshipped Mac (a character in the story), and they show up looking for him in that motel. And they're a much bigger deal in the musical because a lot of it takes place in the dancehall because it's a musical."

"So, I want my ideas for those guys' music to be absolutely contemporary music that could get on country radio now. Because some of it's great. The idea that…I'm not one of these old farts that's gonna tell these kids that what they're doing isn't country because I don't get to decide that anymore. I decided it for one second in 1986."

Earle was referring to his breakthrough album, "Guitar Town," which went to number one on the Billboard chart. "And all that happened, was one guy that was a fan that worked for MCA took one box of records to Memphis, and I beat Alabama (the band) by one box of records that week. Some of the stuff that's on country radio (now), I think is great. It's what I've always thought about country radio."

After mentioning Lambert as an example of what's good about contemporary country radio, Earle says, "Miranda Lambert's a bad ass. There was a period where it was just breaking my heart because all the people that were doing anything that interested me, were mostly women. And they weren't getting on the radio. They had to fight. And I had to do the same thing. I had to fight based on what I did live. Kacey (Musgraves), Miranda, they were the people that what they did transcended country music. Some of them didn't. In the case of Miranda, she's pretty unapologetically country, if that's important. It's not that important to me. I'm just looking for great music. But she's the real deal."

"I've been writing with Elvie Shane some," Earle continues, referring to the Broken Bow singer, "and he's really fucking good. I hope he doesn't hurt himself, but he's really fucking talented. I'm writing with those kids because I want to learn how to write music that could get on country radio, and I'm not arrogant enough to think I know how to do that. Mac's music (the Mac Sledge character in "Tender Mercies") I know how to write. It's all pretty much straight South Texas and what I grew up with, which is appropriate for the character. But I'm gonna write the whole thing by myself. But I'm writing with these other kids for what I can learn from them, not for what they can learn from me. I hope they learn something, but I'm doing it to learn from them."

Much like Earle's songwriting heroes, including Jerry Jeff Walker, he's man that is clearly a restless spirit. Sure, he could have recorded "Guitar Town" part two, three and more in the mid-Eighties, and found a little consistent commercial niche. Instead, he went on to write fiction, do some acting, record multiple genres of music and engage in political activism.

It may come as a surprise that Earle is honestly trying now to learn how to write more commercial country music. But it shouldn't. He once sang about having a fearless heart, and that same fearlessness applies to being unafraid to attempt anything artistically, just as much as it does to pursuing romance without restraint. It's difficult not to get excited to hear what he's writing for "Tender Mercies." He rarely ever lets us down. - Dan MacIntosh