Jeff Bates knows a thing or two about the recurrent themes - love and redemption - on his new batch of music, "Leave the Light On."

The Mississippi native with the voice that easily recalls the late country singer Conway Twitty has tackled both a number of times throughout his 42 years. 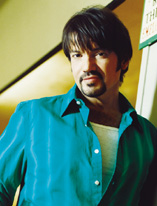 And the plain speaking, easy going Bates will not shy away from the topics either.

"That was totally what we were going for," says Bates in a telephone interview, referring to the love and redemption themes. "We did kind of separate the album out into themes, one being love, romance, openness and the other one being redemption, which is kind of what the past five years of my life has been about."

Bates knows of what he sings. He has been married four times. His first marriage, when he was 17 to a woman 9 years older, lasted a grand total of two weeks; marriage number two was his longest, nine years; marriage three was seven years, and his last marriage was two years.

As for the redemption part, Bates has been to hell in the form of a drug addiction and jail time and back.

That's why he's keen on the next single, "One Second Chance."

"It's hands down my favorite song that I've ever recorded because I think that so many people can relate to it," says Bates. "I can relate to it because of my personal experience with drugs and jail and making amends with everybody and learning to forgive myself."

Bates' problems escalated when he moved to Nashville from Little Rock, Ark. to chase that golden dream of a record deal and songwriting.

"I had smoked pot and drank alcohol a little bit, but not a whole lot," says Bates of his pre-Nashville life. "I can't say that I was really deep off into it."

But he soon fell in with the dark side after being asked by a fellow writer if he wanted to try drugs. "I was tired and just wanted to feel good," says Bates, adding, "It's something I've regretted every day since."

"The most life changing event that has ever happened to me would have to be becoming addicted to meth, which at the time I didn't even know it was addictive... I wasn't even aware of it. I was just having some fun and smoked it. Then for the next year and a half, it was a downhill rollercoaster. I couldn't stop. At the same time, I thought I had it under control. I slowly sold off anything I owned...as my habit per day increased. When I ran out of things to sell, I was so far gone that I started stealing. I would steal from people who knew me, from friends, songwriters. I would take a guitar when they weren't looking."

This didn't last forever, and eventually Bates faced his day in court, although he had returned some stolen items.

Bates says, "The judge said it was unbelievable. He said I was the worst thief he'd ever seen in his life...he'd never seen anyone break in and then return something they'd taken."

"I wanted to feel better about me. I had been chasing the dream of a recording deal for about 10 years, and it just wasn't happening. Failed marriages. Divorce. I just got really got the point where I didn't like me. I didn't like my life. I wanted some relief from that. (Drugs) made me feel better temporarily. You got to understand the first time I did it, I thought I was superman. The rest of the time, I was trying to get back to the way I felt the first time."

"What I didn't realize was the damage you can do to yourself physically and mentally. When you start doing it, your body immediately starts to deteriorate because you deprive it of all the minerals and good things you need. You don't sleep, and you don't really eat either. It's almost like slowly going insane. Your thinking changes. Your behavior changes. For me, whatever darkness there was I had within me anyway, that really brought it out. The more I did it, the more I withdrew from society. I kept to myself. It was like a snowball. The more miserable you become, the more you want to feel better and keep going back to the drugs again and again."

Bates does not run away from his past.

"I am very open about it. I am honest about it. I'm not here to beat anybody over the head with religion. I share my experience for two reasons: to keep somebody from going down the same road I went down or if you're on the same road, to let you know there's a way off of it out there, and there are so many people ...who will help you if you're sincere and are ready to get off of it. It's really become one of the worst drug epidemics...It's reached epidemic proportions in our country."

Bates served 96 days in jail starting in June 2001, an experience which very quickly changed him.

"I woke up in jail after about seven days of withdrawal and that type of thing, shakes, fever, night sweats and all that stuff, nightmares. At least having the first clear thought that I'd had in months, and I realized where I was, and I was the reason I was there, and I deserved to be there. I had lied. I had cheated everybody that I had cared about and everybody that had cared about me. I didn't want to be that person any more."