Chatham County line hopes "Route 23" will be the right path

Dave Wilson recalls the precise moment things began coming together for his band Chatham County Line. "We had hit the road, and we had been camping and roughing it, and the pivotal point of us being a band and a team was getting up on that stage and winning (the "best new bluegrass band" award) at the Rockygrass competition in Lyons, Col." 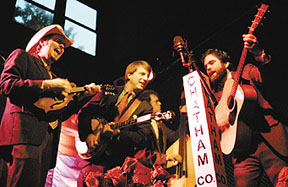 The multifaceted Wilson's early life boasted almost no roots music influences. "I just played in garage bands during junior high and in high school," he recalls from his North Carolina home. "I played the usual gamut of tunes from the Grateful Dead to Steppenwolf. Generally speaking, I didn't come from a very musical family in that we didn't listen to much country, bluegrass or things like that. There was more exposure to the radio, so that's what I grew up idolizing because I didn't know any better."

Wilson's musical horizon's were broadened once he began attending North Carolina State University. "There were people around who helped get me into things that I didn't know existed. I had never heard of John Hartford before or Leo Kottke or J.J. Cale. They're just some of my favorite artists now."

College jam band situations resulted in the formation of Stillhouse, a "loose" contingent that mixed the Southern fried rock of The Band and The Byrds with Steve Earle-influenced storytelling.

Hearing the connection between "the Graham Parsons vibe of music" and country music opened a new line of creative thought for Wilson. Subsequently, he was ripe for the chance meetings in 1996 with the pickers who eventually became Chatham County Line. Featuring Wilson, 30, on guitar, banjoist Chandler Holt, 26, bassist Greg Reading, 36, and mandolin/fiddle master John Teer, 27, CCL struggled for a break.

It came while Wilson and Reading were still part of The Carbines, Tift Merritt's band "We were going out on tour to support (Merritt's) first record," explains Wilson. "So, she had CCL play a send-off party, and we played out in front of this old general store. Well, (producer) Chris Stamey was out there, and he had done the demos for her record. He just heard us and liked us, and I'm not sure if he was just doing it so he'd have something to do, but he called the guys at Yep Roc."

Their first self-titled album from 2003 garnered strong reviews, but Wilson feels the band didn't really gel until they began touring. "The best thing that we've done is go out on the road. When we went to Colorado last summer, it was a great bonding experience - not only between the guys, but between us and our instruments. You can't deny that repetition of playing every night. You reach a point where you don't think about what you're playing, and you kind of transcend just being a guy with a guitar, a mandolin or a banjo." Although Wilson lists to Wilco and Gillian Welch as his current favorites and proudly uses the internet for song lyric research, he insists that his group has a strong regard for traditional bluegrass. "Definitely," affirms Wilson. "I've just studied and listened and stood there in awe. But I feel that we aren't a band that will just copy or emulate the past completely. You can never deny yourself in any way, and the fact that I've grown up with the classic rock radio hits bouncing around in my brain, is going to come out in some way. We're just trying to expound in ways that we see as respectful, but not flagrant." Cut at the Fidelitorium in Keanersville, N.C., "Route 23" skillfully blends acoustic bluegrass and some alt.-rock tinged lyrics. "I love the new record because it has become more about writing for our outfit and what I know each guy is going to bring to the song." As evidenced by such instrumentals as the atmospheric "Gunfight in Durango" and the uptempo ditty "Sun Up," the band's various creative personalities are allowed vent their considerable stylistic range.

"Chandler wrote 'Sun Up' on banjo and just brought it to the table, and we were all just kind of floored by it," says Wilson. "Our music seems to be moving away from the clog style, but I love the fact that we can still do that."

However, CCL truly sets themselves apart when they essay modern life with traditional instrumentation á la "Nowhere to Sleep" and "Route 23."

The songs "are founded in the way I think things are going in society in general. Human interaction is being taken out of every facet of life. You don't talk to people anymore. There's not that guy that's running your credit down at the corner grocery store. I just imagined in my mind where that situation would bring about the death of someone."

Despite making measurable artist strides, Chatham County Line still fights to make a living. Some European shows are planned for September, until then, they plan to "just take this adventure as it comes."

Indeed, Wilson seems to relish the hand-to-mouth existence, quipping philosophically, "This is what an English degree gets you, I guess. A guitar and a couple of albums."