It's a fact of life that unexpected turns will lead us into foreign territory from time to time. Some curse and quiver at these surprise forks in the road. Not Bob Delevante. The Nashville-based songwriter has learned to embrace them. In fact, Delevante based much of his new self-released album "Columbus and the Colossal Mistake" on the idea that some of the best things can come out of the blue.

"Columbus went looking for the Far East/When America got in his way," Delevante sings on the thrusting title track. "Now I guess I know just how good he must have felt/When I bumped into you that day/My best-laid plans seem to be/My colossal mistakes." 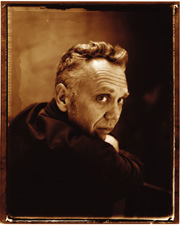 "It's about not always ending up where you think you're going to end up," Delevante says in a telephone interview. "If you're following good things, you end up in the right place. You might be aiming for one spot, but end up in another - and that's okay. That's where you're meant to be."

Formerly half of the Delevante Brothers, who were dropped from Capitol Records after 1997's critically-lauded "Postcards from Along the Way," Delevante has produced perhaps his most glowing effort yet with "Columbus and the Colossal Mistake."

Well-chosen guest spots from all-stars like Buddy Miller (on the gritty rocker "Like a Meadowlark Blues") and Emmylou Harris (on the gentle two-step "The Things I Long To Hear") certainly help the cause. But Delevante shines the brightest when he takes center stage himself, for instance, on the gloriously scattered "Texarkana State of Mind." The song is a rambling, hands-in-the-air carload of buoyancy. Delevante uses a host of border towns to show a man on the verge of change: "You're just like Mexicali and Texico/Florala, Texhoma, Uvada, Kiowa/Kanorado and Calexico," he sings. "You can't even begin/To figure out the state of mind you're in."

"I've always been fascinated by towns on the border," he explains. "The name is half of one state and half of another. I'm just comparing it to being on the fence, in a relationship or whatever. I got an atlas out and went around the borders and found some. I just always that was kind of funny and would make a fun song." A jawharp mix of the tune is included as a bonus track, along with what might seem like a head-scratcher - Delevante's cover of The Ramones' "Blitzkrieg Bop." A roots singer-songwriter covering punk's demigods? Turns out, It's surprisingly successful. Delevante's is hands-down the most inventive interpretation of the song yet, a rollicking jaunt with French horn and Dobro accompaniment that fits perfectly with the diverse song cycle on the disc.

While The Ramones were notoriously rooted in the typical verse-verse-chorus song structure, Delevante's originals read more like flowing, stream-of-consciousness prose. He says that's not a conscious decision: "It's just kind of the way it comes out. I notice (the structure) after the fact. I have a great uncle who was a painter and a poet, so maybe it comes more from that side."

Like many songs on the album, "Columbus and the Colossal Mistake" is a snapshot of a man standing at a crossroads. Delevante's narrators often end up on the gone side of leaving by the end of the song. It's no coincidence that Delevante is adept at snagging individual moments and turning them into universal concepts. In addition to songwriting, he's an accomplished graphic artist and photographer, too. Like Guy Clark, who builds Flamenco guitars in his workshop when songwriting is giving him grief, Delevante prefers to shift his focus to the other creative endeavor to keep his mind fresh.

In fact, photography is so important to his songwriting process that the new album is subtitled "A Collection of Songs and Photographs," and it includes five black and white shots inside the sleeve. Delevante maintains that while songwriting and photography feed off each other, the two take on separate lives. "It's not like, 'hey this (photo) is about that song," he says. "It's just stuff I was shooting at the time. I hate to tie it that closely. There's a picture of the casino at Asbury Park, and the song 'An Old Picture of You' is about the Jersey shore. But it's not like that song is about that photograph. It was more me tying together the mediums I was working on together simultaneously."

The two might not be directly related, but Delevante admits that they do provide a yin and yang in his life. "A couple years ago, I took some time off from playing and recording and started shooting again," he says. "I found that I missed it quite a bit. They really do complement each other - they're both a narrative telling a story. Sometimes where music left off, photography would pick up. I could tell a story I couldn't do musically. They're also nice rests from each other, working visually and musically."