When the topic of American roots music is discussed, classic soul is rarely given proper credit as an essential element of our nation's cultural fabric. This didn't dissuade Dave Gonzalez of The Paladins and Chris Gaffney of Dave Alvin's Guilty Men from joining forces to explore the links between country and soul under the moniker of The Hacienda Brothers.

The band's self-titled debut dropped in February on the Koch Nashville label. "When I was a kid, I remember learning to play guitar to Otis Redding and Sam and Dave records," Gonzalez, 42, recalls during a phone interview from his California office. "My dad had country records, and I'd play guitar to those, too. I discovered that the scales of the songs were the same, but country was just twangier." 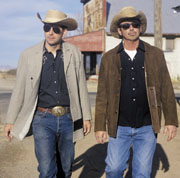 For his part, Gaffney, 55, is no stranger to the marriage of soul and country. On his 1995 album "Losers Paradise," he and Lucinda Williams recorded a duet of "Cowboys to Girls," a 1968 R&B hit originally recorded by The Intruders.

The Hacienda Brothers album has been a topic of discussion and a labor of love for Gonzalez and Gaffney for many years. "This is exactly the album I wanted to make because I love Western music, and I love R&B," Gaffney says via telephone.

The pair met in the early 1980s when playing at a famous Southern California honky-tonk, The Palomino. Gonzalez was fronting his long time rockabilly blues trio, The Paladins, and Gaffney was playing accordion behind Dave Alvin. The two immediately became friends as a result of their love for roots music and shared Latin American heritage.

Gaffney went on to play accordion on The Paladins' number "Rain Rain" as well supporting emerging artists produced by Gonzalez.

But it took the intervention of mutual friend and former Tucson country radio D.J. Jeb Schoonover to bring about the formation of the Hacienda Brothers. "He was really the instigator," Gonzalez explains. "Finally, after a couple years of Jeb's persistence, we agreed to write a couple songs together in Tucson."

After four songs recorded as a demo, the pair knew they were onto something special. They realized that in order to record an album blending country and soul, they would have to put together a dream team.

The first step was finding the perfect producer, and the number one draft pick was Dan Penn, a man whose songwriting and production defined the Muscle Shoals sound.

Penn has written hits for everyone from Ronnie Milsap to Aretha Franklin. His famous songs include "The Letter" by The Box Tops, as well as soul mainstays "Dark End of the Street" and "Do-Right Woman, Do-Right Man." If the Hacienda Brothers were seeking a producer with instant credibility in the worlds of country and soul, Penn was the man for the job.

Fortunately, Gonzalez and Penn were acquaintances since meeting at a European music festival several years before. They both shared a common passion for music and a love of American hot-rods.

When the time was right, Gonzalez lured Penn to the Hacienda Brothers project by leveraging their mutual love of restoring classic cars.

"As it turned out, the motor in my DeSoto blew up, and I had to replace it," Gonzalez recalls. "I ended up writing Dan a note telling him I scored a killer motor from the Desoto club, and by the way, here's my new demo."

Two or three days later, Gonzalez heard back from Penn who immediately wanted to be part of the project. Rather than recording the album at Penn's Nashville studios, he felt strongly that the band could maintain the southwestern flavor of the demo if the recording took place in Tucson.

Working with Penn opened many creative doors for the Hacienda Brothers. Between recording sessions, Gonzalez and Penn took every opportunity to retreat into the mountains to talk about nature, cars and the mysteries of the desert. "We were looking out over these big lonesome vistas at all the cactus," Gonzalez remembers. "We started strumming the guitars together, and that's how we wrote 'Looking for Loneliness.'"

Along with "Looking for Loneliness," the album features a handful of originals mixed with some obscure, but compelling, covers. Gonzalez did the lion's share of the original songwriting for the record, and most of the songs feature Gaffney's unique and soulful voice.

After having been a lead singer with The Paladins for 23 years, was it difficult for Gonzalez to turn the microphone over to Gaffney for most of this joint venture?

"Absolutely not," Gonzalez maintains. "Chris' voice is the best instrument we have in our band. I sing a little bit, but I write a lot. I always wanted to expand the boundaries of my music by adding another singer, a piano part and a horn section. The Hacienda Brothers allows for that."

Another element of the band's studio all-star team arrived when Penn's long-time friend Wayne Jackson of the Memphis Horns agreed to take part in the project by adding trumpets to two tracks. His signature sound provided a Mariachi vibe to the striking instrumental "Saguaro," a number Gaffney describes as "an epic Western song."