Honeybrowne offers "something to believe in”

Don't wake up Fred Andrews from his dream, which is writing songs and performing with honey-smooth Honey-browne, a trendy young Texas band that's part rock, part country and only the tiniest part Lone Star rowdy.

The band's new CD, "Something to Believe In," released Nov. 15 on Compadré Records, blends classic and contemporary rock, alt-rock and pop with a little bit of country that's more contemplative than angry, yet still youthful enough to appeal to the 20-something crowds. And rootsy enough to appear on the Americana Music Association's music chart. 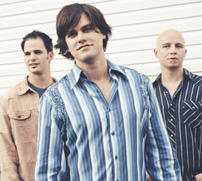 So, what makes Honeybrowne a trendy band?

First of all, and, really, least important except perhaps for the independent attitudes it fosters, the band's members - all in their late 20s and early 30s - don't just live in the musical Mecca of Austin,; they live in trendy South Austin where the rent's cheap, where the neighbors are likely to be artists, too, and where the belief is that Austin itself is now too corporate or too crowded or too, well, "something" that just isn't hip enough.

"We're very happy to do what we do. We've gone through all the hardships of the teens and early 20s and are approaching having a solid personality," Andrews says. "We just like to write about things we love and like to do. Music is one. Women is another."

Most important, the songs aren't all about binge-drinking beer and yeehah Texas, a formerly trendy movement that may actually be beginning to wake up from its own hangover.

In other words, lyrics - and lyrical variety - count.

"We're lifers. We just want to play music around the songs we write," Andrews says. "Our main goal is to mix the pop side of songwriting - the catchy melodies - with the Texas style of songwriting - telling stories that have a lot of meaning. The combination of making a pop hit and a country hit is to have lyrical substance. We're trying to achieve that goal."

Andrews began writing songs in the early 1990s when he was studying at Southwest Texas State University in San Marcos to become a teacher.

He grew up listening to what his dad listened to: Billy Joel, Simon & Garfunkel, The Beatles, The Rolling Stones, Elvis Presley. As a teenager, he was into U2, The Replacements, The Smiths, The Cure.

"I think my songwriting reflects a combination of that stuff and my Texas music heroes," Andrews says, referring to Willie and Waylon, Kris Kristofferson, Townes Van Zandt. "Those are givens for me."

Andrews began playing in college to entertain himself and his friends.

Andrew says at the start he didn't know how to play other people's music. So he did the next best thing - he made up his own.

From playing at parties, Andrews moved to weekly gig with a changing group of friends at a local club. When they won a gig opening for Jackopierce and needed a name, they pulled Honeybrowne off a beer coaster.

"I want people to feel the emotions that hearing great music brings out in me," Andrews says. "I just want to make music that's real. We play from the heart, sing from the heart, write from the heart. It's just honest, good music."

"Finding Shade" was the band's debut CD in 2001, followed by "Live at the Fabulous Satellite Lounge" and "Good For Nuthin'."

Andrews says putting together the new album "was done with a lot of tender loving care.

"I didn't rush anything. The guys just came into the studio and we played the songs until we liked them, until they worked out right. There was no urgency to get it out at a certain time, so we took the time we needed to pre-produce and record. We're very happy with the final product."

"He is just an amazing idea person," Andrews says. "He has a thousand melodies coming out of his pockets and endless ideas.

"When you work with a producer who doesn't have ideas for you, it's tedious. Mark works with your ideas, and he has ideas and something good comes out. He's an amazing musician and producer and songwriter that I and everybody in the band believe in."

Andrews says he is still learning the craft of songwriting; most of his cuts on the new CD are co-writes. In addition to six songs written or co-written by Andrews, the CD also features contributions by Addison and his longtime collaborator Nina Singh, former Honeybrowne guitarist Alex Weeden with Austin rocker Matt McCormack, and rising Texas talent Ryan Carter (son of Austin songwriter Bill Carter).