Two meandering, picturesque creeks nourish and beautify the Pennsylvania landscape where Julie Lee spent her childhood summers. It's not surprising then that the intertwining wellsprings of family and faith inspire her music and art today.

Lee grew up in Maryland. "My dad is 100-percent Irish; that's where I get my performing side," she says in a recent telephone interview. "My mother's family is of German descent, from Bedford County, Pa. We spent our summers there."

"As a kid, I thought Bedford County was kind of a boring place," but she says her mother instinctively "knew it was important to expose us to places and things that were disappearing." 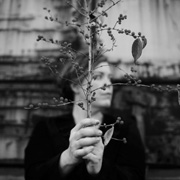 As she and her sister wandered down Bedford County's back roads, Lee grew to love the simplicity of the rural lifestyle and the mystery of old family stories.

On "Stillhouse Road," her country and bluegrass debut release on Compadré Records, Lee draws from those childhood memories and her Christian convictions to design what she describes as "a patchwork quilt of history and memories and of musical and personal influences."

While neither of her parents is a musician, both love music.

"In fact," says Lee, "it's a family joke that my mother married my dad for his record collection."

From her father's records, Lee found magic in the voice of Ella Fitzgerald. From her mother's collection, she enjoyed the storytelling of singer-songwriters Carole King, Carly Simon and James Taylor. As she matured, she began paying closer attention to lyrics.

"Remember the 70's song, 'Alone Again, Naturally' by Gilbert O'Sullivan?" Lee asks. "I used to lay on my bed, listening to the 45rpm, crying my eyes out. It was the saddest song I'd ever heard!"

Although she derived pleasure in entertaining herself and family, Lee felt she lacked the classical orientation necessary to continue majoring in music at West Chester State University in Pennsylvania. She redirected her creativity toward the fine arts program. Then, one day when she was 20 years old, Lee had a "religious epiphany" and purchased a $20 guitar she saw in a thrift store window.

She began teaching herself to play, and sought the company of other musicians and artists. "I knew I wasn't going to be a guitar virtuoso, but I watched and listened. I liked Shawn Colvin's percussive style of playing."

After graduating from college in 1990, she headed to the place all aspiring young American artist-musicians want to go: Budapest, Hungary.

During her two-year stint teaching English to Hungarian high school students, she encountered a group of American expatriates who shared her beliefs and nurtured her talents. With Paul Jenkins and Kelly Larsen, she formed the Christian musical group "The Clay."

Returning to Maryland in 1993, she took a job in a youth ministry "with an office, a good salary, benefits and security." But she realized it wasn't her true calling when Jenkins called in 1995 to say he had moved to Nashville to start his own recording studio.

Despite parental concern that she was "wasting her education," Lee left Maryland for Nashville.

A difficult seven-year struggle followed. She decided not to seek the steady income that teaching provided. "Teaching takes everything you have. I wanted my energies going into music. So I waitressed, cleaned toilets, then took a job as a nanny and cleaned diapers."

When she decided she "needed more adult company," she began working in retail. That led her to a job in an art gallery, which inspired her to resume creating her own artwork.

Regrouped with Jenkins and Larsen as The Rest, Lee aggressively pursued a career in contemporary Christian music. Success was always seemed just around the corner. She gradually became disillusioned with the Christian music scene.

At the same time, she was becoming increasingly interested in bluegrass and roots music and especially Alison Krauss's work.

"After I had returned home from Budapest," she recalls, "I was home from college watching television. Alison came on, and I was awestruck. I'm thinking this girl plays like a banshee. Then she opens her mouth to sing. Amazing!"

Listening to Gillian Welch ("I wanted to be able to tell a story that well") and Dolly Parton further inspired her. Soon, Lee says, "I heard bluegrass calling my name!"

Venturing onto her own, she became a regular on the Nashville coffee house and club circuit. She also began making annual, and later semi-annual, journeys to Great Britain to perform. She cut independent "glorified demos" of several compositions at Nashville's Downtown Presbyterian Church.

She was at her day job in the gallery, though, when her big break occurred. With great reluctance, and only at the urging of the gallery owner, Lee approached a customer who happened to be a friend of Krauss. The friend accepted Lee's tape and soon after Lee received an invitation to have lunch with the bluegrass superstar.