I Two decades into her singing career, Patty Loveless has earned many number one hits and awards and in recent years, heightened status as one of the great voices of country music, staying true to her roots and eschewing the mainstream.

While others may have ridden the commercial country wave, Loveless returned to the sounds of her eastern Kentucky upbringing with mountain, country and bluegrass on the highly acclaimed "Mountain Soul" in 2001 after her career was going through a less popular period with airplay and sales. She racked up good numbers sales-wise and a wider audience also thanks to participating to the "O Brother, Where Art Thou?" spinoff tours. 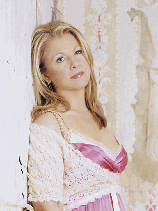 Loveless continued veering left with a Christmas album and "On Your Way Home" in 2003 - making excellent music without huge sales or airplay.

So when it came time to make her new "Dreamin' My Dreams" disc, Loveless says she looked back on her life in music, which includes husband and producer Emory Gordy Jr., who has produced 12 of the 14 albums of original material put out by Loveless.

"The idea occurred to me when I've been out there on for 20 years now," says Loveless during a telephone call from her home in Dallas, Ga. "Out of the 20 years we've been making records, Emory and I have been working together, and this is kind of our 20th year anniversary."

"I had a lot of people coming to me and asking to me, 'when are you going to make another record like 'Mountain Soul,' which was more acoustic, a mixture of country and bluegrass and mountain...music."

But figuring out what to do proved a bit of a quandary for Loveless. "Of course, I still have those fans that want to hear the more contemporary side of the records that I did such as 'Only What I Feel' and 'When Fallen Angels Fly' and 'The Trouble With the Truth'."

"In thinking (about this), I just brought to Emory possibly what could we do? I was listening to various kinds of music - anything from country to Americana and listening to a variety of various artists out there that weren't sort of mainstream country - and pulling from that of what we're listening to today, and we decided to do an electric session where all the songs that needed electric instruments, and then we went in and did a full acoustic session."

In other words, Loveless was trying to achieve the best of both worlds.

"We took songs of the acoustic session that sort of had the feel of 'Mountain Soul' versus "On Your Way Home.' It's kind of a mix. We were able to merge the acoustic into the more contemporary, the more electric form of music."

"In this record, I feel that all the songs - not each song - stand out like a bluegrass song or a country song. It's a blend of all genres of music. There's rockabilly, rock and roll, country, bluegrass, mountain, Americana."

Ace songwriters Jim Lauderdale and Leslie Satcher co-wrote "When Being Who You Are Is Not Enough" and "Everything But the Words." Loveless also covers Steve Earle's ballad "My Old Friend the Blues" and incorporates Dwight Yoakam's baritone to back her up on Delaney Bramlett's bouncy "Never Ending Song of Love." (Interestingly enough, Yoakam and Loveless grew up in the same small town of Pikeville, Ky., though Yoakam moved to Ohio, as did Loveless for a stretch before her family returned to Kentucky when she was about 10)

Loveless adopted Waylon Jennings' slow, spare burner, "Dreaming My Dreams With You" as the title cut.

For Loveless, the song "takes me back" to when she was 14 years old and in Nashville. She sang with the Wilburn Brothers and performed with Porter Wagoner and Dolly Parton on the weekends. After finishing high school, she became a featured vocalist with the Wilburns, a job once held by Loveless' cousin Loretta Lynn.

"That's the magic of music," she says. "The song takes you back."

"In 1976, I left Nashville," Loveless says. "I was very young (19). I married some guy from North Carolina and moved to North Carolina."

While there, Loveless played in a rock band with her husband, Terry, a drummer, but the two eventually divorced.

"'Dreamin' My Dreams' I thought would be an appropriate title for the record because when I came back to Nashville in 1985, I was able to dream my dreams. I feel like I'm able to keep living my dreams now."

She came to Nashville with a demo tape that caught the ears of MCA executive Tony Brown, who signed her.

"It was always a favorite song of mine that Waylon had done," says Loveless. "I remember owning this particular record when I was 14 or 15 years old, but I had really totally forgotten about this song."

"It's kind of odd. When it comes to the remake, it's like doing Patsy Cline and 'I Fall to Pieces.' There have been so many girls recording, but to me it's Patsy Cline to who the song belongs to. 'Dreaming' was brought to my attention when they started pitching songs to me. Emory played the song for me, and, of course, it was Waylon's song. He asked me about this song. 'Are you kidding? I've always loved this song. I would love to record this.' But I was trying to pull from Waylon and also from thinking what would Patsy Cline sound like if she went into the studio and recorded this."