But as befalls many artists, things started going the other way. 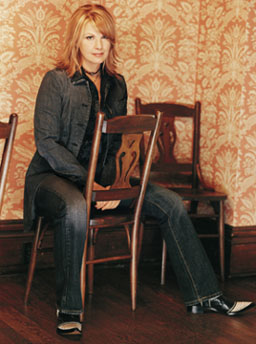 Instead of attempting to go for the commercial jugular and back where she belonged, Loveless went in a very very different direction - her eastern Kentucky roots and bluegrass/mountain/Appalachian music with "Mountain Soul" in 2001.

For some, that could have been the end of a relationship with a record company as well because in these trying economic times, no sales means no record deal.

The album probably would not have had much chance at the cash register under ordinary circumstances.

Of course, those were not ordinary times. "Mountain Soul" certainly was not a commercial album, but it sure came out at the right time.

The "Oh Brother, Where Art Thou?" soundtrack had been released about seven months before "Mountain Soul" and done fantastic numbers surprising just about anyone and everyone.

Instead of disappearing in the marketplace, "Mountain Soul" sold hundreds of thousands of copies, and Loveless herself was part of the "Down From the Mountain" tour based on the "Oh Brother" success bringing her to a wider audience.

On the heels of that, Loveless released an album harkening back more to her country roots, "On Your Way Home," without selling her soul for sales.

"I feel that this one was inspired somewhat by the 'Mountain Soul,'" says Loveless during a phone interview from her weekend home in Georgia. "I had recorded in the year 2000. We kind of wanted to do a record that was capable of being mainstream country, but at the same time, we were able to take some of those influences of the 'Mountain Soul' record through the making of this one."

"This particular record, I feel that this is the closest I've ever come to being traditional mainstream country with an edge," says Loveless. "It's the first record I've ever done that I felt that we were able to accomplish that finally. It's the one first one that doesn't have any kind of piano, strings or synthesizers, which is what I'm talking about. No keyboards whatsoever. But it was a mixture: fiddle and mandolin, acoustic guitar are on the record and then a mixture with banjo and Dobro. It really, of course, complimented electric bass, drums and electric guitar. The blend of these instruments was appropriate of all of these songs."

At 46, Loveless says she thinks the same was right for her to make this kind of music and apparently not be concerned about the commercial success of the album.

"I'd come to a point in my career where 'Mountain Soul' made me so fearless of presenting music in this kind of format. I felt like there weren't any really hard core country female artists out there, and I've always been sort of somewhat that style of artist. But I also did this record for myself, for my own soul."

Some observers could have labeled "Mountain Soul" as a vanity project by an artist who had done well for a label, but had a yen to do something different.

But that perception may well have changed on the "Down From the Mountain" tour, a conglomeration of musicians touring together in the wake of the soundtrack. Loveless was not actually even on the soundtrack, unlike others on the tour such as Emmylou Harris, Alison Krauss + Union Station and Ralph Stanley.

But Loveless' music fit with the concept. Some observers said she benefited more than anyone else on the tour from the exposure that it drew to the artists.

In fact, Loveless' inclusion on the tour specifically led to the inclusion of one song on "On Your Way Home," the first single, Rodney Crowell's "Lovin' All Night."

Crowell, who recorded the song 11 years ago, served as the emcee of the evening of "O Brother" music. His job was to introduce the players, who would generally do a few songs in Grand Ole Opry style and then have another artist take over.

Loveless and Crowell were on a concert stop in Roanoke, Va. They were actually planning to sing a song by the Louvins instead.

"It was real country," she says. "I felt like it was a little bit more country sounding. I think in the long run, the producer of the show wanted Rodney to do one of his songs. He decided to do 'Lovin'.' He came and asked me if I'd go up and sing it with him."

"As I recall that night, it wasn't when I was singing it I thought I'd record it. It all came back to me when we were picking songs for the record."