Like his longtime friend and fellow bluegrass pioneer Jesse McReynolds, Kentucky-born Bobby Osborne recently faced, at 74, the breakup of a long-running, highly successful brother act, though fortunately in this case it was due not to death, but rather to the retirement of his brother Sonny.

Following shoulder surgery, which hampered his banjo playing, Sonny limited himself to singing with Bobby at select venues like their longtime Opry home, but eventually decided to pack it in for good. 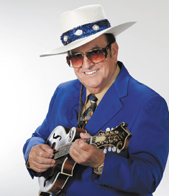 From his Nashville-area farm, Bobby Osborne says in a telephone interview, "I think he just kind of got burned out, you know, and he wanted to retire from everything altogether. So, he and I just had a discussion, and I told him I'd like to go on, and he said, 'Well, be my guest and go on because I think I'll just give it up.' So, at that point there, which I think is just about four months ago, he quit the Opry and quit the road, just completely retired, and I've been on my own ever since."

Sometimes, he acknowledges, it's just good to be in the right place at the right time.

"Of course, about the time that he retired from the road...the contract with Rounder came up, and everything just kind of fell in place for me. I wanted to go on, and that's what I'm doing, and I'm just really enjoying it."

The Rounder deal has resulted in his first CD, "Try A Little Kindness," as a solo act with his new band, the Rocky Top Xpress.

Produced by fiddler par excellence Glen Duncan (who spent considerable time in the Osbornes' band), the title cut is a cover of the '70s-era Glen Campbell hit, and the rest of the songs may strike longtime Osborne fans as remarkably eclectic, from old Stanley Brothers tunes to legendary writers like Hazel Dickens and Kris Kristofferson.

Perhaps the most striking selection is his version of a classic Stanley piece, "The Fields Have Turned Brown," on which he manages to place his own distinctive vocal stamp.

"I've loved the way Carter and Ralph did it. You know, I worked with the Stanley Brothers back in the '50s, before I went into the Marine Corps. I used to sing that song with them, and I always did want to record that song, I just love that song...When I got a chance to do it, I didn't want to do it like them, and I don't know, I just did it the way I felt like singing it, and it turned out really good. I was really proud of that song 'cause it's a good one."

Another standout is "West Virginia My Home," Dickens' anthem to her native state. Osborne says he's long wanted to record it, but it took a while to make it happen.

"I met Hazel years ago, and the last time I saw her was at the IBMA down here, back just a few months ago. Somehow (Rounder chief) Ken Irwin sent me (a) tape, it came through him somehow or another, a tape of her recording of it on Rounder."

With Sonny bowing out of the picture, he realized that he had a bit more latitude in selecting material to perform and record.

"I hung on to that tape and hung onto it, oh I don't know, a bunch of years, and I tried to get my brother to record it, and (it) seemed like he never did care about the song."

"So, when the Rounder contract came up, I asked Ken if there were any favorite songs that he would like me to do, and he sent a whole bunch of songs to me. In the meantime, I had misplaced that tape of Hazel's recording of it, and Ken sent me some songs to listen to, and 'West Virginia My Home' was in that bunch of songs. Of course, the very minute I heard it, I recognized that song. I thought, well, being as how he sent that to me, he might not mind if I recorded it."

"So, we worked that up just a little bit different from her, and it just turned out really good. I saw Hazel, and she was just tickled to death that I recorded it, and so was Ken. He really liked it too."

Perhaps the widest departure from the classic Osborne repertoire comes on what might be called the quintessential "hangover song," Kristofferson's "Sunday Morning Coming Down."

"Glen Duncan...and I were picking out material, and we had a couple of songs that we had already decided to do. I don't know, one morning I woke up, and I got up, and somehow or another that song came to my mind when I woke up, you know." "And, of course, I was familiar with the song from a long time ago, but I never, ever really thought about singing it. But when I woke up that morning thinking about that song, I spoke to Glen...about it and he said, 'Well, I'll tell you what, when you wake up with a song on your mind, the best thing to do is record it.' So, we discarded another song and put that one in there, and boy, the people that's heard it, it's shocked them that I would do a song like that, but it turned out good, I thought."

Faced with the unique problem of having to find a new banjo player for the first time in a half-century, Osborne didn't have to look any farther than the existing Osborne Brothers band.