At the bar and grill, Blake Shelton dishes it out

Life's great for Blake Shelton. After all, he just found out two days earlier that his latest single, the catchy "Some Beach" hit the top of the charts, the third time the long, lean Okie has done so.

"If you wrote me a check for $10 million, I couldn't be any happier," says Shelton in a telephone interview from the Nashville office of his record label, Warner. 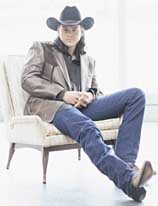 "I was on stage," says Shelton, describing how he found out about his latest great news. "The way the charts are built these days, a promotion staff can follow a song minute by minute. I was on stage Sunday night in Miami. And we were towards the end of the show. It was almost midnight, and I'd just finished 'Some Beach' on the stage. I got a note passed, and it was from my promotion staff. We did it again."

A juiced up Shelton immediately lit into an encore version of his newly crowned number one song. "The crowd got two versions that night," says Shelton. "We were in the studio about half way through the album," says of "Blake Shelton's Bar & Grill," which came out at the end of October, describing how he found the song.

Album producer Bobby Braddock "brought it in, and I immediately recognized Paul Overstreet's voice singing it," Shelton says of the demo recording he heard. "When I got to the first chorus, we called him and said don't play this for anybody. We had to cut it a few times. The first version was too islandy, and it went over the top a little bit. We were going to approach it like it was a Don Williams record or Bellamy Brothers and let the groove carry the song, and I'm glad that we did."

Jimmy Buffett is another reference point, especially considering that the song mentions "Margaritaville."

Shelton, who hits the road this spring and summer with Rascal Flats, sees the Buffett connection as well. "I could too, not as much talking about the beach, but talking about the personality. Buffett has that kind of personality getting kicked when he's down...It's something that everybody goes through every day, and I think that's what people liked. I loved the humor and love that it's real polarizing. It's the kind of song that you either love it or hate it. More than anything, the overall personality fit with the rest of the album."

"Some Beach" was not the obvious single to send to radio. In fact, it was not even the first single from the disc. The Harley Allen/Jimmy Melton song "When Somebody Knows You That Well" was the first one and did not do very well.

"It was out about four or five weeks and just wasn't doing anything. We decided doing something that was 180 degrees different and try to break out of the ballad thing."

"There was a little bit of question," Shelton says of picking "Some Beach." Obviously, I was coming (without) momentum at radio, and we wanted to do whatever it took to get me airplay in a big way. This was the type of record that could either way. People could say 'we can't risk that' or 'it's going to be larger than life.'"

"Luckily once a few (radio) stations added it, they got a big response (from listeners), and it started moving up the charts. Everyone pretty much jumped on board at the same time."

This is not Shelton's first brush with big time success. "I think the coolest thing for me is there's been a number one hit on each album. That's important to me."

On Shelton's debut, he topped the charts for five weeks with "Austin" a ballad about a man's continued love for his girl.

The follow-up disc, "The Dreamer," contained the number one hit "The Baby." But in an industry where you are only as big as your latest smash hit, the failure of "When Somebody..." did not leave Shelton resting too easy.

"Absolutely, I had been (anxious)," he says. "I'd been worried about that (having hits) since the first album."

"With that first hit being so big and a ballad, it was something I've been trying to recover from ever since then," he says. "It didn't help that my next big hit was besides "Ol' Red" (a humorous song about a dog that helps free a prisoner) was 'The Baby,' another sad ballad. I wanted to do all kinds of music. As you know, sometimes people want to hear one thing from you. I get away with more than just that."

Shelton views "Barn & Grill" as "sort of a concept album, I hate to say that. We wanted to make an album that was (like) stepping into a bar hearing people's conversations around you. The drinking is just a vice, but there are reasons that they do this, and they are there."

"When we first started talking about this album, it was right when the second album came out," Shelton says. "We (Braddock and Shelton) went out to dinner one night, talking about what we wanted to do. I brought a list of songs with me."