Possessed by a sense of irony as well as a sense of humor as dry as the Southwestern brushlands for which his band Backcountry is named, singer and songwriter Chris Stuart, 46, is naturally thrilled with the response to their new, self-released album "Mojave River."

But he laughs as he reflects that not too many years ago, he thought his music career was as frigid and ice-bound as the upstate New York landscape where he, a Southerner by upraising, was spending another bone-chilling winter.

"To be honest with you, I moved out to San Diego partly to get away from music. I was pretty burned out...in 1996 and sick of being turned down by several Nashville publishers." 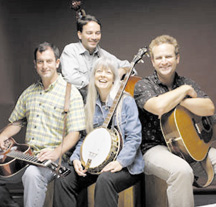 Though actually born in Indianapolis himself, both of his parents were natives of Port Arthur, Tex. At 35, his father, an oil field worker, became a preacher and moved his wife, two daughters and son to Jacksonville, Fla.

"My sister, Betsy, got me a guitar when I was in eighth grade and for some reason the first song I learned was the theme from 'Bonan-za'...About tenth grade, Pete Seeger came through town, and I discovered his banjo instruction book. I absolutely hated old time banjo and only spent time on the two or three bluegrass banjo pages that are in his book. I love old time banjo now, but back then, all I wanted to hear was Scruggs and Stanley - this was about the time 'Deliverance' came out...that was the beginning, and I became one of those banjo nuts that live with the banjo 10 hours a day."

After graduating with a degree in medieval history - and finding a less-than-active job market - he married a veterinary student, Peggy Barr, in 1982. They moved in 1986 to Ithaca, N.Y., where she would finish her doctorate and have two kids.

Stuart worked at Cornell as a computer programmer and consultant, laughing again as he notes the irony, "Remember when you didn't have to have a degree in computing to get a job?" In the early '90s, he formed Cornerstone, a band that gained a following in the Northeast for straight-ahead bluegrass (Bill Monroe once joined them on stage) spiced with the jazz-influenced stylings of female vocalist Dee Specker. They put out three albums, and Stuart also began to get noticed for his own songwriting, with his material being covered by bluegrass artists like Claire Lynch and Suzanne Thomas.

Still, when a job opportunity for his wife in sunny Southern California beckoned, Stuart knew it was time to move on.

"When we moved out here, I didn't plan to play music anymore. I was still writing, but didn't do anything with the songs. I played in a band called Hwy 52...and that kept my hand in playing banjo and starting to have fun playing music again, but not taking it seriously."

He soon found that, by itself, the change of scenery got his creative juices flowing again.

"I've fallen in love with the West. It's easy to do, what with the desert, ocean and mountains out here. There's something out here that appeals to me. Maybe it's just that there are more extremes out here, in the weather and the people."

The "missing ingredients", as he puts it, to his musical rebirth turned out to be Janet Beazley, now Backcountry's banjo player, and mandolinist/guitarist Eric Uglum, both former members of a highly respected California band called Copperline. Uglum eventually left to be with Lost Highway.

"Janet produced a Hwy 52 album, and I got a chance to get to know her in the studio and see how truly brilliant she is. Because she's also a flute player and a trained musician, she has the best ears of anyone I know, but also has a great acoustic/bluegrass sensibility."

"When I first heard them, I got excited again about music because here were people who were playing traditional bluegrass, but it had that drive and that tone that I love...A lot of people don't really know what an effect Eric's playing has had on a lot of people, from Ron Block to Rob Ickes and Stuart Duncan to Julie Elkins. He really is an important guitarist, and it was great to be able to do (Eric's solo) album with him and Janet, 'Shenandoah Wind' (also on the Backcountry label)."

With Janet on banjo, Stuart moved over to guitar, and rather than go the more usual route of adding a fiddle or mandolin, they managed to land one of the West Coast's top Dobro talents.

"After a few false starts, we were lucky enough to find Ivan Rosenberg. I had met Ivan at several festivals in California. What I liked about his playing was that he played the melody! And very tastefully. That's what I wanted in the band, so we were lucky that he was able to join us at just the right time."

As the band got going, still centered in Southern California, the fourth member turned out to be bassist and San Diego resident Dean Knight, who provided harmony vocals as well. Knight appeared on the debut album, "Saints and Strangers," but as their touring itinerary expanded, he was forced to drop out.