T rick Pony has become known for hosting some of the all-time greats of country music on their albums. For their 2001 debut, Johnny Cash and Waylon Jennings were on hand. Willie Nelson dropped by for "On a Mission" the next year.

So how do you possibly top that for your third album? 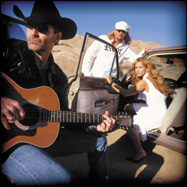 "We've got more country singers on this album than a Nashville rehab center," laughs bassist Ira Dean in a recent phone interview. "We called up everybody, Mel Tillis, Tanya Tucker, Joe Diffie, Tracy Byrd, Tracy Lawrence - and some friends of mine from Cincinnati that I can always count on to be drunk at 6 in the afternoon. They tailgated all the way in from Cincinnati, and we all just sang and had a ball."

That all star chorus is on the Pony's single "Ain't Wastin' Good Whiskey on You."

But that's not all. Darius Rucker of Hootie and the Blowfish (that's right, Hootie and the Blowfish) helps out lead singer Heidi Newfield Johnson, guitarist Keith Burns and Dean on "Sad City.""We met Darius a while back at Farm Aid, which is a place where we've made a lot of lifelong friends," Dean explains. "Keith had written a song called 'Sad City,' and we'd been doing it since the bar room days, and we always wanted to cut it, but Sammy Kershaw cut it first, and we didn't know if it was going to be a single or what. And we were on Hootie's bus drinking strawberry moonshine and swapping guitars. Keith started playing 'Sad City,' and Darius asked who wrote that, so Keith said 'I did.' And Darius said if we ever cut that song, he wanted to sing on it. So we cut it, and he showed up, played golf all day and then sang the heck out of it that night. Darius is more country than most country artists in Nashville."

Want more? How about Kris Kristofferson?

"Heidi lost her mother a couple years ago to MS, and we used to do this gospel thing every night," Dean says, turning uncharacteristically serious. "I think it was therapeutic for Heidi. And her mother was a huge Kris Kristofferson fan, and so Heidi asked Kris to come in and do a recitation for a song called "MaryAnn's Song" all about Heidi's mother, and he was kind enough to do that. Afterwards he said to Heidi, 'I never met your mother, but now I really feel like I knew her.' I think it helped to put a little closure on that sad situation."

"And we have George Jones on there just being George. We could only use the clean edits, which is why there's so little of it. Cuz everything else was just the Possum ragging the mess out of Nashville."

Another thing Trick Pony has become known for is the sense of humor they've demonstrated on tracks such as "Pour Me" and "Just What I Do." There's plenty of that on the new album too.

"If you can't have fun in the music business you need to quit," Dean says with a laugh. "How can you take this seriously? You can't. When you write on your W-2 that you play guitar for two hours a night, you can't get upset and serious about this whole deal. I used to tar roofs for a living. I know what it is to work, and this ain't work. We take our music seriously. Yeah, we all three write. I'm starting to produce. And when I write, it's usually something that makes me laugh that triggers an idea."

"I've got a neighbor. I've got a farm by Mel Tillis' farm, and my neighbor about a mile away. You can hear him singing karaoke at four in the morning. He's got a full karaoke bar with a disco ball and the fog and the lighting and all that stuff. And I thought it was hilarious. I mean God help him if he won the lottery, he would just spend it all one the stupidest stuff, and that's what inspired the song 'Hillbilly Rich.'"

It's perhaps not surprising that so many of the legends of country music think highly enough of Trick Pony to sing with them on their records. Trick Pony got started playing for some of the greats.

"In 1995, I was playing for Tanya Tucker, and Keith was playing for Joe Diffie," Dean relates, "and we all played at a place called Jamboree in the Hills in West Virginia, and Keith had me up on their bus. He told me about this idea he had for a trio, and this was before trios came out, before the Dixie Chicks and all that. He had this idea of me and him and a female country singer, kind of a country Fleetwood Mac. My first impression, since I dress the way I dress and Keith dresses the way he does, was that we'd be more like the country Village People.

"But about six months later, Tanya fired me, so I called him up and said, 'are you still looking for a bass player', and he said, 'I sure am'. I was in Europe playing with Johnny Cash. And he called me up and said, 'I found this female harmonica player, and you gotta hear her, she's incredible'. And when I got back into town, lo and behold it was Heidi Newfield, who I've known forever. Nashville really is a pretty small town.""We went into the studio and tried to make some music to see what we sounded like together, and we sounded just like we do today. The harmonies were like family harmonies, and it's hard to find three people to blend like that. I wish I could say there was a method to our madness, and we planned it all out, but it was really all luck."