It's about time for Webb Wilder

After nearly a decade without a new album, Webb Wilder has returned with "About Time," a collection of 15 songs that span the spectrum of raucous country, blues and rock and roll.

As the voice behind the hit recordings "Human Cannonball" and "Tough It Out," Wilder is also one of American music's most interesting characters. He's one of the few artists with a credo to call his own ("Work hard, rock hard, sleep hard, eat hard, grow big, wear glasses if you need 'em."), and his encyclopedic knowledge of American music can be heard daily on XM satellite Radio's "X (Cross) Country" station where he hosts a regular show. 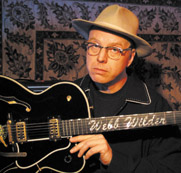 Given his raw talent, charismatic personality and rabid cult following, why the long wait for a new release?

"Part of the problem was no record deal," Wilder, 51, explains via telephone from his Nashville hometown. "I'm not really the guy who goes into his basement and makes his own record. As great as that is, I think sometimes you get cheesy albums."

The solution to his lack of a recording deal came when he became reacquainted with the folks at Landslide Records who released Wilder's 1993 classic "It Came From Nashville." The label re-released the album last year packed with live bonus tracks. This led to a deal and the ultimate recording of "About Time."

"Growing up with Bobby - who had always written songs and was far better at it than me - was a little intimidating," Wilder says. "It's like having John Lennon for a big brother. But he's always been there for me with these great songs to do."

The new disc contains a lively mixture of originals and covers recorded with Wilder's band The Nashvegans. As an eclectic crew of industry veterans, they are able to evoke a Brian Setzer Orchestra, big-band sound on tracks "Down on the Farm" and "Battle of the Bands" as easily as they can pull off a cheeky Western number like the hilarious "Scattergun."

When crafting original material, Wilder draws from experiences in his life. Regarding the Rockpile-influenced "I Just Had to Laugh," he says, "The song came about as a result of my friendship with R.S. I went through a divorce in 1999 after a long marriage, and we were talking about it in his car one day. I told him 'You've just got to laugh to keep from crying.' Light bulbs went off in our heads, and we started writing that song. We didn't finish it until 2004 as we were recording this record."

Wilder's sense of music history shines through on the cover tunes captured on "About Time," including Cliff Richard's 1958 hit, "Move It."

As Wilder explains, "It's one of the most significant pre-Beatles rock and roll songs. It was the first time that British bands got the rock and roll thing right."

He even takes a Tin Pan Alley turn on the track "Old Copper Penny," a heretofore-unrecorded song from honky-tonk poet R.B. Morris. "I thought it was the Burl Ives, old man song on the album," Wilder says, "but interestingly enough, it's the one women seem to like."

Although he has never been part of the Nashville mainstream, Wilder is an ardent defender of his adopted hometown.

"It's really a great place," he says. "The sound of country music, to quote Chet Atkins, is the sound of a ringing cash register. And sadly, it's very reactive as opposed to proactive at times. What I can say for Nashville is that sometimes a great song can be obscured by saccharin production. But this is really a songwriting town, and even the bad songs from here have more craft and professionalism in their writing than you'll find in other places. And when that comes together with art and inspiration, you get some great songs."

Wilder continues, "You have all these people like Marty Stuart and the folks in the bluegrass scene who revere the rootsy stuff. In that sense, it feels more like Austin than the media's representation of Nashville. The country music industry in Nashville has done an incredible job of selling itself to the world. The only negative thing about that is the way they've effected people's perception that rock and roll, for instance, can't come from here."

As an artist who has always been equally comfortable in the worlds of country and rock and roll, Wilder credits his childhood interest in music for his diversity of sound today.

"I think you are what you eat, you know?" he says. "And I grew up during the British invasion and I really am from the South. I really did watch The Johnny Cash Show and listen to The Kinks. If I'm going to be musically honest, that's just the way it comes out."

Because Wilder's style has always been so hard to pigeonhole, he has also been a hard artist for record labels to market. Is he a country singer? A roots rocker? A made-up character with a cult following? Wilder ponders, "Just because I'm hard to market one way, doesn't mean I'd be a monster smash by going another route."

He concludes, "Nobody wants to see me in spandex."