Lee Ann Womack finds there's more of where that came from

Lee Ann Womack doesn't leave any room for doubt on her seventh release, "There's More Where That Came From."

Instead of the sometimes more contemporary sounds of her last studio CD, "Something Worth Leaving Behind" from 2000, the fiddle playing of Aubrey Haynie comes through loud and clear from the get go on the title track, meaning that Womack is returning to a far more classic country sound and attitude. 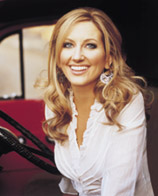 And while Womack did not have a hand in producing this album - Byron Gallimore did 12 of the 13 songs - the sounds and direction of the new disc are no mistake. The album even contains honest to goodness cheating songs.

"I had told Byron I'm from Texas, and I wanted to sound like it," says Womack during a telephone interview from her office in Nashville in late December.

And why exactly is Womack interested in once again showing off her Texas roots?

"Probably no other reason than that was the mood that I was in," she says matter of factly.

As if to underscore, the more traditional sound, the disc is actually coming out in vinyl as well with the cover design adding to that feel.

"When I first (was listening to prospective songs), they were so country (like) 'One's a Couple,' and it's my favorite kind of music. I just thought I know this stuff. This is what I do best, and I headed off in that direction."

But Womack acknowledges that she did not necessarily go into the process of recording the new album, which drops Feb. 8 on MCA, expecting to end up with a far more traditional sound akin to her 1997 debut.

"What I do is I find a few songs that I start the record with, and then I build around that," says Womack. "'I May Hate Myself in the Morning' was one of the first songs I found. I sort of build a lot of the other stuff around it."

"Initially, I didn't know what I was going to do," says Womack. "You have to search and see what comes up."

Womack found the song after songwriter Odie Blackmon brought it to Womack's husband Frank Liddell, a music executive. He, in turn, handed it over to his wife, thinking the song fit her style.

Womack says her husband plays a "huge part" in determining what songs she records. Liddell is "a huge sounding board. I almost never cut anything without, I would say, his approval."

The song, Womack's first single from the album, concerns a couple getting back together after their relationship is dead.

"Everyone's known someone
That they just can't help but want
And even though we just can't make it work out
Well, the want to lingers on
So once again we wind up in
Each other's arms pretending that it's right
And I may hate myself in the mornin'
But I'm gonna love you tonight
I know it's wrong
But it ain't easy movin' on
So why can't two friends
Remember the good times once again"

Picking songs is not an exact science, of course.

"Sometimes it's a lyric," says Womack about the process. "Sometimes it's a melody. But usually if I like both and if I think the lyric fits the melody and if it sounds like something I would say and a melody I would sing, if I can hear myself singing it right away, I'm probably going to cut that one or at least hang on that one for awhile."

"Sometimes it's easy to know it right away, and sometimes I have to sit down and listen to it and sit down and ' play it on the guitar it and sing it a capella around the house and see what I would do with the song."

The opening song, the title track, may have contained everything Womack says she needs. The cheating song also finds the female feeling none too good.

"I had never hard a song written like that before, that twist and that idea and everything," says Womack. "It sounded like a very very traditional sounding song with a brand new twist."

Womack could not be accused of being a prolific writer, although she did write "Twenty Years and Two Husbands Ago" with veteran Dean Dillon and Dale Dodson.

The song describes a woman who "had it all, just too young to know," but moves on in her life.

Womack indicates that life's experiences have changed her thinking. "Raising children, going through a divorce, you learn you're not the most important thing in your life. You learn that just because something seems like a huge deal when you're in the middle of it, it's not a couple of years later. You get stronger. You get wiser."

The notion of recording a traditional sounding album is not some foreign concept to Womack.

In fact, she grew up with that. Her father, Aubry, was a disc jockey back in Jacksonville, Texas at radio stations KEBE and KOOI.