The Wrights ease on down the road

If decisions were made solely on musical connections, then it would be easy to understand why The Wrights were able to release their debut, "Down the Road."

After all, Adam Wright, who along with wife Shannon, comprise the Wrights, is not only from Newman, Ga., Alan Jackson's hometown, but also happens to be his nephew. The Wrights also put out "Down the Road" on ACR, Jackson's label, being distributed through BMG.

So if the idea of nepotism creeps into one's thinking before listening to the album, it would be expected. 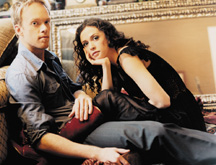 But, in fact, the Wrights offer a type of country no longer much played nowadays - twangy, spare country music filled with a bunch of duets. Both Wrights sing lead with Shannon doing the majority. And they even wrote all 12 songs.

Adam confesses in an interview from their Nashville home about the Jackson connection, "We think about it more than other people do."

"We don't want people to think that, but it's obviously a response," Shannon says, about relying on Jackson.

But she makes it clear that she and her husband are not dilettantes and Johnny-come-latelys to music. "We've been playing together for seven years. It's not like we are an overnight success together. We were going to do this regardless. It just turned out to be the best offer really."

In fact, Adam Wright says the Jackson connection is a bit of a mixed blessing. "It makes us work that much harder because there is that pressure," he says.

Shannon moved to Atlanta after graduating Georgia Southern. "I had always been a singer and jumped up on stage with people and knew my basic guitar chords. The more I jumped on stage, the more I got the bug for doing this for real."

Adam had his own musical thing going, playing old country and folk songs.

Needing a guitar player, Shannon's cousin walked into the Redneck Gourmet in Newman where Adam was a cook and saw him play. Impressed, she got his phone number ("I still have the piece of paper," says Shannon.) "He came up on a Thursday night, and we played for four hours without ever rehearsing. I remember I was real apprehensive at first because I had never heard him play or anything. As soon as I heard him play, I was amazed."

Despite playing covers in bars, Shannon says, "We'd bring in old country songs that we loved, blues and folk, all over the board, from Hank Williams to John Prine to Bonnie Raitt. We would bring those to the table. (Because of that) we lost all our gigs in one week. I was pretty freaked out."

"Adam was pretty grounded, and he said he knew it was the best thing," says Shannon.

"You get stuck in those cover things because you're making money," says Adam. "You can only be so creative doing cover gigs. There comes a point if you're a writer, your not going to be satisfied doing covers forever."

They eventually decided to pack it in for Music City. "We got married and moved in the same week," says Shannon, a much more countrier version of Sheryl Crow..

In Nashville, they hit writer's nights in clubs and wrote a ton.

"People were getting kind of excited, and we were getting excited playing a lot," says Shannon. "Alan was always in the loop, but we never wanted to ask him for anything."

But Jackson called them to his house one day, asking if they wanted to cut an album for his label. "He wanted us to make the album we wanted to make and then get it out to as many folks as possible," says Shannon.

"It was exactly what we were looking for really."

The Wrights made their album, and Jackson pitched the disc to the BMG conglomerate. "They said they wanted to be a part of it," Adam says. "It was really Alan's idea that we do our own songs."

The Wrights wrote songs together and solo. The 12 songs on the disc produced by Keith Stegall, who also produces Jackson, and John Kelton, focus on love, both from serious and humorous bents.

"I usually get the ideas by myself and worked them out and hand them off and let Shannon clean them up," says Adam.

On the jocular side, is Adam's "On the Rocks." After listening to the lyrics, one wonders if this couple really is married: "I don't like the way you've been treating me lately (I can't stand to hear you talk)/One of these days you're gonna drive me crazy (You're almost there you could probably walk)."

No reason to fear for the couple who married 2 1/2 years ago.

"We had always for some reason saying if we were just messing around or arguing, I'd say we're on the rocks already," says Shannon. " We were only married a year. We kind of coined the phrase 'on the rocks.' It became our line. I remember one morning in particular. I was cranky. I don't remember about what."

In walks Adam, who wanted his wife to listen to a song he penned, "On the Rocks."

But they also stray away from that theme with "You're in Georgia," which describes life in the peach state where "there's cornbread in the oven, chicken tomatoes in the garden, watermelon too/Gardenias on the bushes, honey, heaven's own perfume."

They sing with a sense of pride about their home state without being too sentimental or suffocating in state pride. Shannon describes it as "a little more subtle."

Jackson has certainly been helpful - he is bringing them on tour - and contributed vocals to "Leave a Light On."

But when it comes to the Jackson connection, cynics be damned. The Wrights follow in the tradition of country's great duos like George and Tammy and are willing to stand by their product.

Shannon concludes, "You want people to make up their own mind."