"I find myself liking the opposite of what most mainstream people like. I've never really been interested in pop music from any era simply because of its palatability." 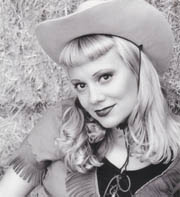 A departure from her hillbilly-oriented debut, "Red Barn Baby," the singer-songwriter ran the risk of offending country's staunch traditionalists.

"When we first talked about the different genres we wanted to attempt, I was worried that it wouldn't be received very well. Here we are releasing things (that originated with) Sister Wynona Carr ("Pilgrim Traveler"), Etta James ("Nobody Loves You (Like Me)"), all the way into straight western swing ("My San Antonio Baby") and Bob & Lucille ("Eeny Meeny Miney Mo")."

However, the stylistic risks taken pay off because they highlight the instinctual contrariness that has marked the singer-songwriter's brief career thus far.

Like many neo-traditionalists, her musical appetites have been whetted by eclectic collector's tastes rather than contemporary commercial considerations.

Born in San Francisco and raised in Boulder, Cal., Merritt's musical obsessions were first fueled by a box of her parents old 45s. As she explains via phone from her Alameda church, her interests immediately blossomed.

"When I was growing up I listened to everything from the Violent Femmes, Siouxise & The Banshees, all the way over to the very early Ska stuff, which is really what sold me on music itself. From there I started drawing correlations between old rock steady and American Doo-Wop and started finding a lot of similarities. From there, I went to rhythm & blues, and from there I went into rockabilly, and from there rock 'n' roll, hillbilly, western swing and that kind of thing. Most people progress forward, I just keep going backwards."

Yet despite rampant musical interests, Merritt didn't even consider expressing her vocal gifts until she turned 26. The catalyst was her husband Steve Merritt. Now lead guitarist for the Saddle-ites, he played with the punk bands Complete Disorder and Third Rail before gearing into rockabilly with the Stillmen.

"Right around the time he got involved in rockabilly and the Stillmen was when he decided that he wanted to start his own record label," Merritt says.

"He wanted to specialize in 45s. First, he had actually asked the Stillmen if they wanted to release something on the Star Tone label, and they said, "Yeah, and do you want to join the band?" That's when he started teaching me to play the guitar.

"Singing was very casual. It wasn't anything that took a major focus. But when I learned how to play guitar, that's when I started writing songs and becoming really interested. That's when Steve said, 'You know, you've got two really good songs here. I think we ought to put 'em on a record.' It was just a matter of, 'Hey, you know what? We've got the recording date and musicians lined up - let's do it.'"

Equally casual was Merritt's 1999 on stage debut and formation of her band.

"As a spectator, I went to a nightclub where they were having a jam session, and the guys asked me up to sing. I sang a song and walked back to my seat and had a promoter saying, 'So, when can you get up three sets?' So, that's how that happened, and it happened rather quickly - within a matter of a couple of weeks it went from jam session to recording studio."

Although Merritt doesn't care for her Star Tone 45 today, it got her on a bill at England's Hemsby festival singing behind rockabilly legend Glen Glenn - only her second gig.

And it attracted the attention of El Toro Records in Spain.

"The label owner, Carlos, heard the 45 - poor guy - and he wrote me an e-mail saying, 'Hey, would you be interested in considering doing an album for El Toro?'"

Their first outing, the Steve Merritt-produced "Red Barn Baby," was pure hillbilly of the Rose Maddox and Charline Arthur school. No coincidence as Cari Lee portrayed the former in a well-received local theater production. For their follow-up LP, both singer and band wanted to expand their sonic vistas without being saddled with production chores.

Enter traditional music maestro Billy Horton, who encouraged the band to multi-track, experiment rhythmically and make each song distinct within the framework of the Saddle-ites hillbilly bop style.

"He knows everything there is to know about the equipment and technology and how to get the kind of sound that we wanted for each particular song," glows Merritt. "Billy Horton has a great sense of how to approach people about different ideas. He can read people really well. He also has such a great ear for music that he can suggest different things that we may never have even thought of."

The result is Merritt's most enjoyable outing yet, containing several strong self-penned songs and clips of a TV performance for those who might not get to see her live. Why is that a concern? Because, the former teacher is both a mom and a student working towards her PhD in psychology. And, though she writes constantly, plans a summer tour and an LP of pure r&b, she still considers music a "leisure time activity."

Meanwhile, husband Steve works as a buyer for a networking company. "We've talked about doing this full time too," Merritt explains. "I think we look at our music more as a life's passion rather than a job - and we don't ever want to look at it as a job. Because that's something that you have to do - not something you really want to do."

Merritt's part-time approach to music seems to garner as much positive attention as constant touring does for other acts. Further, she states with a twinkle, "It also gives you the capability to eat more than just Top Ramen."