Hands up, it's Two Dollar Pistols

"We've become much more of a serious band," says Two Dollar Pistols front man John Howie. "It's less of a hobby and more like a job - in a good way." 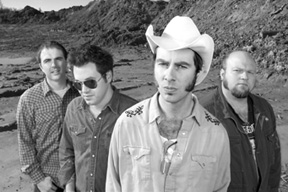 Howie says his admiration of Wilco's Paulson-produced first album, "A.M.," led him to ask the fellow North Carolina resident to work with the Pistols.

The band told Paulson, who cut a deal to be able to work together, that they hoped to capture the energy of their live show on record, according to Howie. So Paulson came to the band's performance at a benefit show for Alejandro Escovedo in Raleigh, N.C. last November shortly before recording was to begin. Afterward, Howie pointed to the Pistols' well-received set of hard country as the sound the band wanted to put on record.

Paulson was easy to work with, Howie says, and approached things with an interesting perspective. "He would say, 'Okay, I want to go for kind of a Bob Dylan 'Love and Theft' thing. And I, of course, had no idea what that meant."

The album was recorded over two weeks at Rick Miller's (Southern Culture on the Skids) Kudzu Ranch in Mebane, N.C.

Howie, who is admittedly very critical of his work, gives "Hands Up!" his hard-earned seal of approval. "I can ride around in my car and listen to it and not pick everything apart," he says.

Pedal steel player Clyde Mattocks (Johnny Paycheck, Super Grit Cowboy Band) lends his talents to "Hands Up!," as he did on "You Ruined Everything." Howie says Mattocks is the "unofficial fifth member of the group."

"I hope he'll play on everything we do," he says. "He's a great player and a great person. He did everything enthusiastically and put his heart and soul into it."

Lead guitarist Scott McCall and Howie are the only members of the ever-revolving Pistols lineup who remain from the last go round. Matt Brown replaced Mark Weaver on drums, and Mark O'Brien took over bass from Neal Spaulding to form the band's new rhythm section.

Howie says he's been happy with the addition of O'Brien and Brown. "We were lucky. The first guys we tried out were the right guys," he says.

Howie and McCall co-wrote four songs: "Too Bad You're Gone," "There Goes My Baby," "Don't Start Me Wonderin'" and "It Doesn't Matter Much to Me."

Howie says he's been able to develop a songwriting partnership with McCall that he has been unable to achieve with many other people in the past.

"It's hard to take something that's really personal and say, 'What do you think of this?" he says. "You have to put egos aside."

McCall is able to consistently help him finish lyrics or to consider chord changes that he hadn't previously thought of, Howie says.

"It's opened a whole new world for me and really made me appreciate co-writing," he said. "Some of my favorite songs on the record are ones we wrote together."

Howie hopes that "Hands Up!" allows the band to build on the success it found with "You Ruined Everything," an album he says the band wanted to be a "statement of where we were."

"It really did a lot of good for us," Howie says. "It broadened our base noticeably."

Among those who noticed the album were the folks at Opryland, where the band had the chance to play last summer during the Opry Plaza Parties series.

The experience, Howie says, wasn't exactly like playing the Grand Ole Opry, but "about as close as you can get."

"It was just a blast," he says. "No one there treated us any other way than we were supposed to be there. There were people there like Little Jimmy Dickens, Porter Wagoner, Jim Ed Brown - people who were mythical figures in my house, growing up."

The Pistols are veterans on the ever-expanding Yep Roc roster, which boasts the likes of Jason Ringenberg, Caitlin Cary, Nick Lowe and Dave Alvin.

Howie says Yep Roc has been very good about promoting the Pistols' music. "We've sort of grown up together in a sense," he says. "Besides, I live right down the street from them - I can go and yell at them if I need to. Just kidding."

"Hands Up!" should garner some attention from prospective music buyers if only for its provocative black and white cover, which shows a full-figured blonde with a dangerous grin, pointing a gun straight ahead.

The woman in the photograph is the mother of Howie's sister's boyfriend. She was a model who dated Lenny Bruce and Joe DiMaggio in her younger days. He says the photo was taken in the late 1950s or early 1960s for an advertisement for TV Guide for a Western TV pilot that never aired.

"I knew we would use it would be the cover as soon as I saw it," Howie says. "It's the perfect picture."