And thanks to his 10th album, "Cannonball" and a hit single with "Feels Just Like It Should," Green is back on track with a change in musical direction and a new label.

"Man I wanted to put together a group of songs that could be played in big spaces if you know what I mean," says Green via cell phone from the Detroit area just a few days after "Cannonball" debuted at number 2 on the Billboard country album chart with 38,000 units sold. 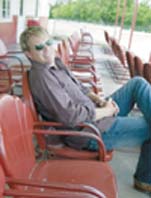 "There were a lot of times when I was a younger man that I would be thinking I'd be having these small crowds, and I got to tell them a story (about the songs) and talk about it."

He still does some of that on "Cannonball," but apparently touring with country superstars Kenny Chesney and Keith Urban has altered Green's perception of how his music should go down.

"Honestly, when you watch a Kenny Chesney or Keith Urban put on a show, it's more than just music. It's this whole thing. It kind of even turns into music itself. It's them. It's like they have extra ammo."

"Those folks aren't just coming to see a band play. It's a bigger deal. If you want to play with the big boys, you got to be a big boy."

"I'm thinking along the lines of hitting big crowds," says Green, who is used to that in Texas.

"I just felt like making a record that had a few more songs that had a big space to fill up...That's the best way I could put it in my mind."

Green describes the decision as "kind of" conscious, but staying true to himself. "Yes and no. First of all, when you sit down and write a song, you got to tell the truth as it hits you right then. If you're not writing from an honest space, it's easy to tell. It's easy to tell if you're trying to conjure up something. It feels real contrived. That's where I think my mindset is right now."

Green, 34, says his thinking is "not a competition" with Urban or Chesney. "It's the kind of inspiration that you need to elevate your game."

Why is it important for Green to play bigger places and spaces? "If I was only serving my ambition, I'd be an awful selfish sonofabitch. There's 17 guys who go up and down the road with me every day, so I'm not the only guy that's making a living out of this. I owe it to them as much as I owe it to me to get as far along in their lives as they can. That's the number one motivating factor."

'At the same time, all my life whether playing basketball or working at a camp, I wanted to be the best at that thing that I was doing at the time that I could. I don't see any reason why if you're going to do something, why you wouldn't settle for something at the very tip top of it. That's just where I've always lived."

Green says part of what makes his music tick is by being honest in his approach. On "Cannonball," more than ever, a Springsteen influence comes to the fore where listeners could envision The Boss singing some of these songs.

Green does not shy away from the Springsteen influence.

"Absolutely, no doubt. I've been singing his songs for five years. I've been a fan of his forever, but once I got the guts up to sing his songs, that's such a powerful thing to perform. You want to capture that on your own. Once I was realizing how good his songs were on stage, I said I've got to have my own songs on it. That's part of what the 'Cannonball' record is."

"I've seen him acoustic and with the band. There are so many facets to what he does, and he's such a good entertainer. Wow, there's not a person be it rock or country or anything that couldn't watch him and learn a lot of lessons how to make music compelling and not being preachy and get on stage and be the best preacher in the world.."

"You don't want to preach to people. That's not the point, but you can get an emotional response by just being (yourself). This is something I feel strongly about, and I'm going to sing it in a way that you're going to go 'oh wow'. That sends a chill down my spine. That's the connection you're looking for."

Green met Springsteen the last time he played in Dallas. "There's not many men because I think we're all just guys or women it doesn't matter. There's not anybody who makes me all that nervous except for Willie Nelson. There's Bruce Springsteen. I knew I was going be a basket case when I met him. Sure enough, my mouth was dry."

Vocally, Green says this disc was different for him as well. "I really stretched out my chords on this one. I sang in a way that wasn't necessarily comfortable for me. I had to learn how to hit those notes, and I had to learn how to sing them and deliver them. That's all part of the process of making a new record than you have put out in the past. If I was I was putting the records I was putting out the first time, nobody would be watching because they'd be bored with it by now."