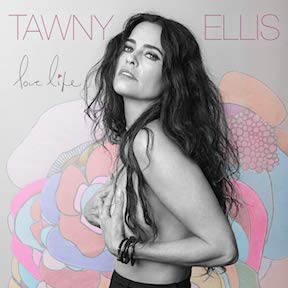 Strangely enough, Tawny Ellis has somehow managed to elude widespread attention, a mystery made all the more confounding given her emotive vocals and solid sense of song craft. Her latest album, "Love Life," affirms the fact that Ellis is decidedly deserving of an attentive audience, given that its ten songs connect in a very personal and poignant way. Each offering allows Ellis to share her perspective on love, longing and relationships, and given the support of of special guests Ted Russell Kamp, Gio Loria and Jesse Siebenburg - all of whom have ample experience supporting other artists of a similarly high caliber of craft and creativity - the record rings with steady resolve and resilience.

With Bob Clearmountain mixing some of the songs and Don Was lending advice and encouragement, the album also emits a sparkle and sheen that allows each song to shine, from soaring ballads such as "Spark of Love," "Daddy" and "Moonshine" to dramatic expressions of empathy and intent as expressed through "Powers That Be," "Love Life" and "Deep End of Love." Still, it's Ellis' voice that commands attention throughout, an instrument of purity and conviction that grabs attention from the get-go. Imagine Kate Bush in a more mainstream setting or Brandi Carlisle at her most effusive, and you then get some idea of the pedigree that Ellis can be compared to.

With her ability to express both passion and poignancy in equal measure, Ellis seems easily ease regardless of the setting. She transforms the well-known Steely Dan standard "Dirty Work" into a singular statement of confidence and clarity that leaves the original rendition sounding somewhat pale in comparison. It's a credit to her powers of interpretation that she can take a song borne from such a different perspective and make it entirely her own. Clearly then, there's a lot to be said for a "Love Life" that can resonate this well.

Lee Zimmerman is a freelance writer and author based in Maryville, Tenn. He also expounds on music on his web site, Stories Beyond the Music - Americana Music Reviews, Interviews & Articles. His book, "Americana Music - Voices, Visionaries and Pioneers of an Honest Sound," is available from Texas A&M University Publishing.