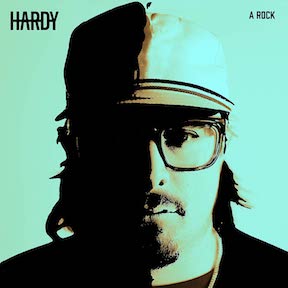 There's a special form of alchemy going on with certain country stars these days. Take some Goodwill Store fashion, electric guitar love and mix it with the simple life concerns of a down-home good 'ole boy. Grunge meets Country...Gruntry? Take Michael Wilson Hardy, for example. He's way more likely to look like he just worked on your car than just had his hair feathered. If he owns a 10-gallon hat, it's in the back of his closet with the tag still on it.

Hardy's country cred and songwriting knack are nonetheless undeniable. He hails from Philadelphia, Miss. and lent a pen to a bumper crop of hits for many current chart residents (Blake Shelton, Florida Georgia Line). Hardy's terrific solo song from 2019, "Rednecker" struck gold - as in sales - but it didn't crack the Top Ten held by much prettier people. America may still not be fully ready for him, but Luke Combs sure has blazed a trail (he was the other guy working on your car).

Maybe the all-cap song titles belie someone trying too hard - Kelsea B. recently went all lowercase - but there's really nothing to take issue with here. "SO CLOSE" and "HATE YOUR HOMETOWN" sound a little pedestrian, as in songs you might find on a dozen other records. "AIN'T A BAD DAY" wants to be Def Leppard's "Hysteria," but brought the bombast without the harmonies. Skip around those, and you've got a great record.

Hardy wants to expand his romantic ("BOYFRIEND") and philosophic ("A ROCK") sensibilities, but shows restraint in keeping it to those tracks. The opener "TRUCK" is especially raucous fun and has many winning details about his tribe. Hardy knows that the love for his lifestyle doesn't only happen in one place ("There's rednecks in the north/and there's rednecks in the south"). He's here to collect them all in one big party. Bonus points for having the good sense to invite Laura Alaina. Just as she did for Kane Brown on "What Ifs," her vocals turbo-boost a good song into more with "ONE BEER."

There's nothing you couldn't play for your grandma here, but this is definitely not her country music. Some of these guitar breakdowns ("BOOTS") would not be out of place in a stadium rock band. But it's got authentic appeal, and Hardy's found the right label at Big Loud Records. Country music was always more than the hats anyhow.